On the morning of September 11th, President George W. Bush was scheduled to attend a reading demonstration at Emma E. Booker Elementary School in Sarasota, Florida.

Over here, in the Middle-East, 17-year-old me is attending a field-day trip of my final year in high school and it’s a sunny September day. In Israel, we’re seven hours ahead of NYC, so at 3:46 PM, when the first plane hits the WTC, I’m in this tent with classmates, having a guided discussion about the adult world we’re getting into.

Back then, some of my classmates had those early-edition Nokia phones and one blonde girl, who is sitting right next to me, receives an SMS text about a plane carrying twin babies that’s crashed.

Right around that time, President Bush is briefed that a small aircraft hit the North Tower and his Chief-of-Staff later shares that they were both shocked by this “horrible incident.”

By 4:30 PM, here in Israel, flight 175 crashes into the South Tower and the teachers come rushing to our tents, telling us school is cancelled and that we must go home now.

It’s a 20-minute drive and by the time I arrive in my neighborhood, our carpool of four guys is already discussing who Osama Bin-Laden is, since one father told his son what was already being shown on the news outlets.

Much has been made about George Bush’s reaction, when Chief-of-Staff Andrew Card comes back into the room and whispers in his ear the following words: “A second plane hit the second tower; America is UNDER ATTACK.”

Bush states that he intentionally decided not to appear dismayed or horrified, since he was aware of the press coverage. Andrew Card recalls that at that moment, George W. Bush truly became president.

No matter what your personal opinion is of this moment, it is the one where the realization sets in that nothing will be the same as before.

No American has ever seen anything like this before and the paradigm shift was monumental.

Not to compare the two, in terms of orders of magnitude or in the scope of tragedy, but I do see something ironic in the way that the president first learned of the event as a small plane crashing the North Tower, deeming it an accident, and 20 minutes later, realizing that it was a full-on terrorist attack on American soil, with how central banks and investors valued and weighed the news about hyperinflation in America in 2021, compared to their insights in 2022.

In 2021, it was inconceivable that inflation would last; after all, the consensus was that the world was opening back up, and with how efficient global trade is, we’d be back at it in no-time.

Central banks didn’t even think of hiking; they were terrified of that, thinking that just as the recovery was building steam, they’d be the ones to ruin the mood and kill the joy.

There’s an enormous difference in dealing with a plane accident and a coordinated globally-televised terrorist attack; central banks are now using the 2nd playbook.

When dealing with the attackers, the U.S. government went above and beyond and was greatly criticized for their colossal mistakes, and now the FED is already coming under fire.

On Thursday, I will be publishing the most crucial new elements of this new economy, but please do not mistake this for any ol’ plane crash — the FED is setting up a global CREDIT FREEZE: 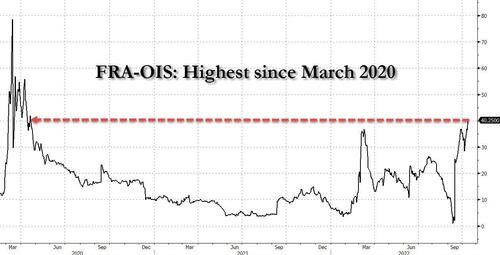