BEYOND DISRUPTIVE This Will Change The World’s Economy!

BEYOND DISRUPTIVE This Will Change The World’s Economy!

A new technological era is upon us, and I am truly excited to tell you about what my team has uncovered after months of intensive research.

It’s not often that I will dare to call a technological advancement “disruptive,” as it’s one of those buzzwords that the mainstream media is so fond of using, but I’m willing to make an exception in this case.

When I explain to you how the world’s economy is going to change drastically, you’ll see exactly what I’m talking about.

Wealth Research Group is constantly watching the technology industry for emerging trends – not mere buzzwords, but real innovations that alter the way businesses operate and the way people live their day-to-day lives.

One example would be the advent of the Internet; another would be blockchain technology. Those of us who invested early in these technologies have enjoyed impressive returns, while the latecomers have to accept whatever remaining gains the market will give them.

And now, the next big thing is here: artificial intelligence, also known as AI or machine learning. It’s in our phones, our banks, our cars, and our schools; we’re clearly past the point of no return with AI technology. If you’ve done just about anything involving technology today, then you’ve been touched by the ubiquitous influence of artificial intelligence.

It has become a global phenomenon, and the numbers are staggering:

When funding in a particular industry surges at such a rapid pace, it reminds me of Google, Amazon, and Microsoft in their early years:  huge opportunities that only a few individuals had the foresight to capitalize upon.  Those companies can still be perfectly good investments, but it won’t be so easy to squeeze massive gains from stocks that have already been discovered and bought by the masses.

As for me, I would prefer to focus my attention on a company in the AI space that is still under the radar.

You see, there’s no getting around the fact that retail investors and the mass media will soon catch on to the intense power and influence of AI technology. We’re already at the point where our economic ecosystem depends on machine learning;

We can see where the money is flowing in the following chart: 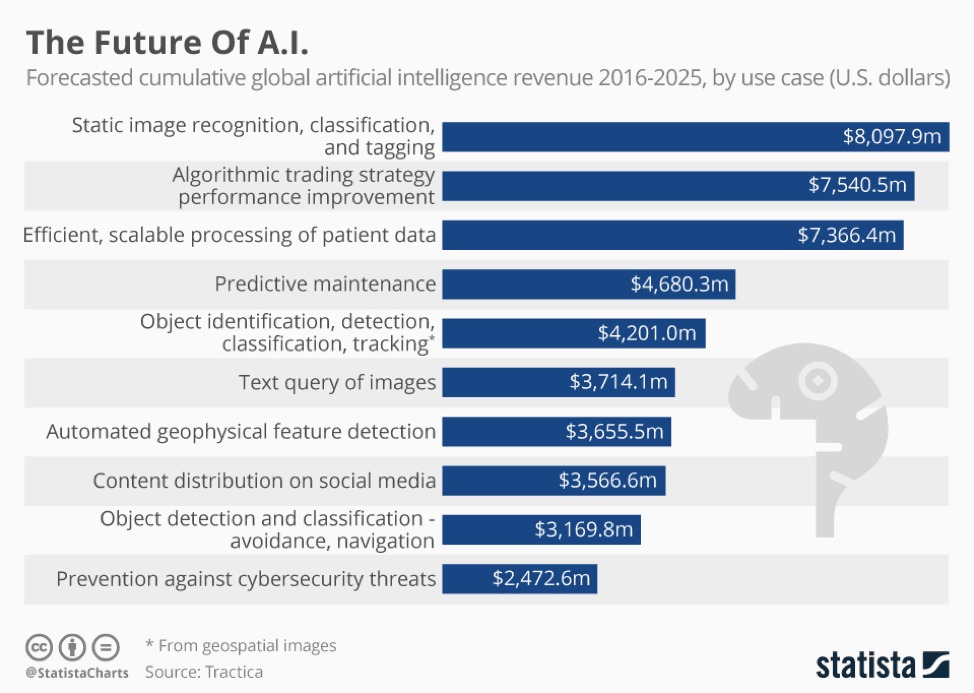 The capital inflow into the artificial intelligence space is to be counted in the billions – not millions – of dollars. The time to get involved is right now, not after the ship has left the port and the traditional media outlets are telling stories of the millions already reaped in the sector.

What we need now is a pure-play investment, a way to stake a claim in the AI sector before it explodes to the upside. To find the right company, my team has been collaborating with fellow researcher Kenneth Ameduri, who has published his own report on this same topic at CrushTheStreet.com/live.

Our findings led us to only one conclusion: a company called Globalive Technology (TSX-V: LIVE & OTC: LVVEF). Working with industry giants such as CoinSquare and Flexiti Financial, Globalive is solving real-world problems using leading-edge 21st-century blockchain and machine learning technology.

With Globalive, founder and CEO Anthony Lacavera has brought investors a shining light among the contenders in the AI space. No other company is a true pure-play artificial intelligence investment that harnesses the immense potential of blockchain technology and the business foresight of joint ventures with powerful partners across the globe.

I’m taking a large position in this, and it’s not a decision that I would make lightly, but I firmly believe that we won’t see an opportunity like this for a very long time.

You’ll definitely want to take advantage of my team’s research findings by downloading our free exclusive report on AI and Globalive at WealthResearchGroup.com/live ­– it’s still not too late to get involved and educate yourself on this life-changing innovation.

Legal Notice: The ideas, projections and views expressed are those of WealthResearchGroup.com and are not ideas, views or recommendations of Globalive or any of its officers or directors. Any forward looking statements are based on our assumptions, projections, beliefs and expectations, however, there is no guarantee that these statements will prove to be correct and are subject to risks and uncertainties. This work refers to joint ventures or investments that Globalive is a party to. Some of the joint ventures may be subject to further negotiation or documentation. Never base any decision off of our emails. WealthResearchGroup.com stock profiles are intended to be stock ideas, NOT recommendations. The ideas we present are high risk and you can lose your entire investment, we are not stock pickers, market timers, investment advisers, and you should not base any investment decision off our website, emails, videos, or anything we publish. Please do your own research before investing. It is crucial that you at least look at current public filings and read the latest press releases. Information contained in this profile was extracted from current documents filed with the public, the company web site and other publicly available sources deemed reliable. Never base any investment decision from information contained in our website or emails or any or our publications. Our report is not intended to be, nor should it be construed as an offer to buy or sell, or a solicitation of an offer to buy or sell securities, or as a recommendation to purchase anything. This publication may provide the addresses or contain hyperlinks to websites; we disclaim any responsibility for the content of any such other websites. We have entered into a three year agreement directly with the company. We plan to purchase shares on the open market as a long-term holding, we have also been compensated eight hundred thousand dollars, eight hundred thousand options, and been given one million nine hundred thousand RSUs. Please use our site as a place to get ideas. Enjoy our videos and news analysis, but never make an investment decision off of anything we say. Please read our full disclaimer at WealthResearchGroup.com/disclaimer