When I was a teenager, I was a basketball fanatic.

I grew up in a time zone that was 7 hours ahead of NYC and 10 hours ahead of Los Angeles, so I would wake up at 2 AM to watch Chicago Bulls games. During the Kobe Bryant era, I woke up at 4 AM, watched the playoffs, and headed straight to class.

I was a starter on the high school varsity basketball team too. When I was 17, a new player joined us from another city, and we immediately connected and became close friends. I taught him a lot, introduced him to people he needed to know, and helped him build social relationships at school.

He, in return, assisted me at the gym because my coach told me I had to show improvement in my legs, mostly.

Two months after his arrival, my coach benched me and decided to start my friend, instead of me.

That was a punch in the face for me. I had introduced him to everyone, made him feel welcome, hooked him up with his 1st girlfriend, assisted him with schoolwork, and now we were fighting for the same slot, and he was winning.

Before we realized that we’re in direct competition with each other, everything was fine. He took me to the next level at the gym, where he was an expert at achieving superior results.

I, in return, showed him his weaknesses on the court and basically turned him into a better player, which was now coming back to haunt me.

You see, two entities, two individuals, two corporations, and even two countries can have a mutually beneficial relationship, until it becomes too competitive. Then, all bets are off.

The U.S. has, through its globalist policies, taken an Asian country, China, which was in turmoil, poverty-stricken, full of internal issues, and violent in nature, and helped it become the world’s largest manufacturing hub in less than 40 years.

On the flip side, China has provided the U.S. consumer, who has been the engine of the global economy since 1946, with affordable goods. The Chinese have also bought U.S. Treasury bonds and thus allowed the western empire to finance its budget deficits for decades on end.

Now, though, The U.S. and China are facing off for global dominance.

President Trump has surrounded himself with people who are not happy about China’s rise to prominence, and they will not give up the throne of militaristic and political supremacy easily.

Peter Navarro, who is the head of the U.S. National Trade Council, actually wrote a book called “Death by China: Confronting the Dragon—A Global Call to Action.”

He sees China as a threat in multiple areas.

Robert Lighthizer from the U.S. Trade Commission, for example, is against free trade, since he sees it as helping China at the expense of the U.S. economy.

It could be that, just like my friend and I went from being best friends to direct competitors for the shooting guard starting position, China and the U.S. are about to collide as well for the position of global leader.

My weakness on the court was slower legs, just as the weakness of the U.S. is its immense Federal debt, specifically when the public now owns almost 96% of it.

If China, as reported, were to halt the purchase of Treasury bonds, it would be a disaster.

Remember, for trade allies, such as the U.S. and China, which have been feeding each other’s growth for decades, there are plenty of hidden secrets that are at stake. Similar to my friend and I who knew things about each other that we didn’t want to become public knowledge, so each country holds over their ally a body of economic, social and political leveraged ractical secrets, which can shock the rest of the world, if revealed.

In other words, trade wars are one thing, but if this escalates into a currency war or a capital war, the ramifications are a full global blackout.

Time will tell what game President Trump is playing – are these negotiations tactics or is the U.S. moving towards protectionist policies, which will strengthen domestic manufacturing, but will make life more expensive for all Americans, at the same time?

When I put myself in Donald’s shoes as an entrepreneur, who pulled off the impossible and became president without having any previous political aspirations, I know one thing for sure – if he fails, he’ll blame it on either the Federal Reserve (domestic enemy) or the Chinese (foreign enemy) for not playing by the rules.

Either way, look out below.

In the 1930’s, governments around the globe were coming out of the 1929 stock market crash, building their economies using monetization plans, but seeing their societies unraveling by increasing wealth gaps, before the entire thing exploded in their faces, and WW2 broke out.

In today’s world, the richest 1% of the population owns 50% of the wealth.

The ultra-rich justify this by claiming that their abilities to generate progress have helped rid much of the world of poverty, but the middle-class in developed nations are getting impatient with this statement, since they feel it was done at their expense, basically. 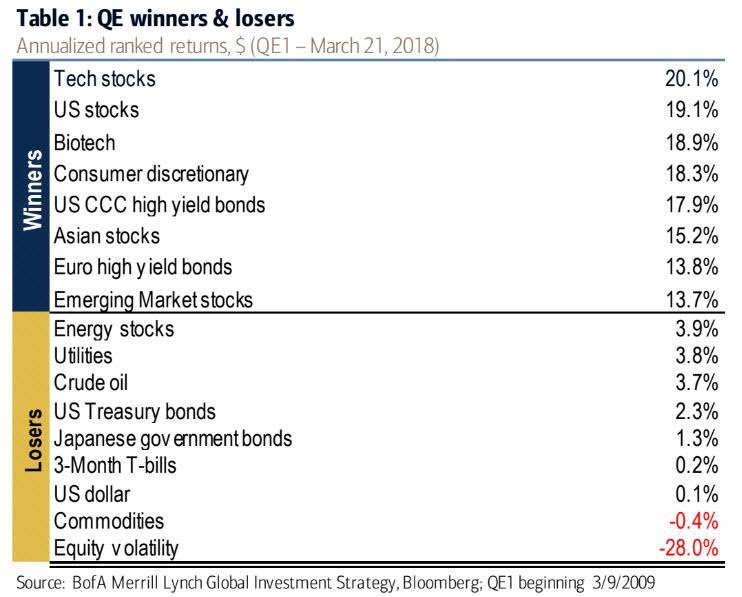 Monetizing debt, at the expense of the taxpayer, has allowed economies to deleverage in an orderly fashion between 2011 and today, since you and I have been paying the bill for it.

Now, the opposite is occurring.

Economies are resuming leverage, cutting taxes, since there are record levels of corporate cash, and central banks are hoping to make sure their QE programs don’t ignite a global inflationary nightmare.

As you can see in the chart above, commodities have been one of the biggest losers of deleveraging.

Wealth Research Group sees them as leading the march from here on.