Warren Buffett began his investment partnership in 1956. It was called Buffett Partnership LTD., and the investors were mostly his family and friends.

That is, the few friends, who trusted him.

Buffett Partnership has compounded wealth to the tune of 19.7% a year, which would have made each seed investor with a $1,000, a multi-millionaire.

I first heard of Warren Buffett when I was 16 and looking to put to work my babysitting savings, along with the money I made as a clothing store salesman, painting decks, and delivering pizzas.

The year was 2000, right after the Dot.Com bubble had burst. By then, Buffett’s company, Berkshire Hathaway was one of the largest businesses on the planet. My goal was to see how that happened, since BRK is, essentially, a holding company, which acquires a wide range of companies, both private and public.

Digging into the history of the firm, I learned that Buffett mastered the art of buying out great businesses, allowing them to prosper and then reinvesting the earnings to make even bigger acquisitions.

When he was only beginning to apply this strategy, the markets were cheap, recovering from the Great Depression. By working harder and wiser than his counterparts, he was able to make a fortune for his shareholders and himself.

The insurance industry, though, which was his bread and butter, doesn’t offer the same attractive valuations today as it did back then. Others have picked up on his secret formula, which is why today Buffett isn’t able to replicate the same philosophy, which made him a billionaire.

Today, it is extremely difficult to make sensible acquisitions at fair prices and grow a conglomerate this way, but the few, who can, make a bloody fortune, both for themselves, but more importantly, for the owners of the stock.

After 18 years of full-time investing, I finally found an under the radar opportunity, which resembles the potential of Buffett’s Berkshire Hathaway, when it wasn't even making the news in his hometown of Omaha, Nebraska.

You see, what I focus most of my efforts on, is finding the Next Warren Buffett, and my industry of choice is the fastest-growing one in the world, yet it is only in its infancy right now.

Because of its unique situation, with the upcoming legalization, the acquisition model is ideal.

This is precisely why Wealth Research Group is making its move now, before the New Warren Buffett becomes a front page story, and the opportunity shrinks into an ordinary one! 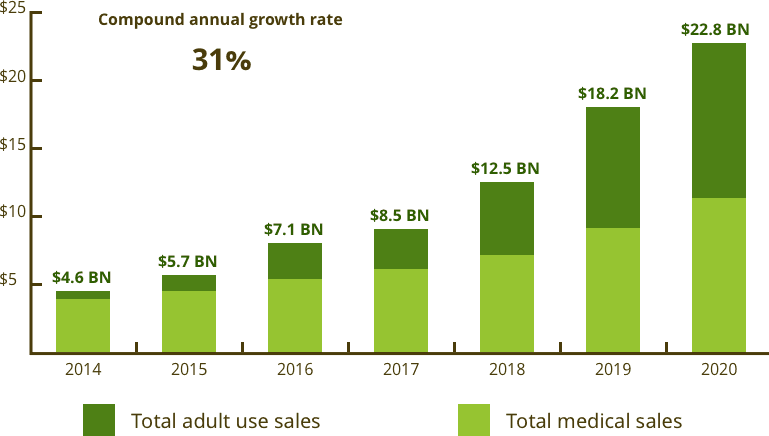 The legal marijuana industry is trending upwards, and there's no end in sight.

Sales for all uses, including the medicinal as well as the adult recreational uses of cannabis, will increase consistently year-after-year, adding to the local economy and bringing abnormally juicy yield for investors.

Legalization is a process, which happens only once, so the timing is critical. 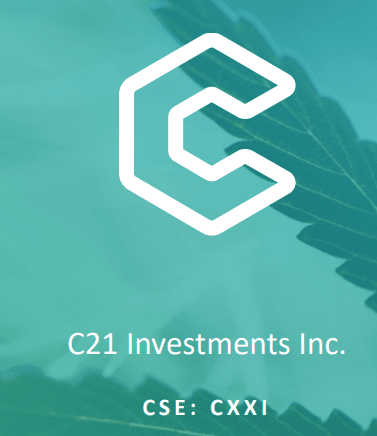 This company is taking the Buffett model and applying 21st century wisdom and 21st century tools to the cannabis industry, and it is working brilliantly for shareholders.

The whole strategy revolves around the uncanny ability of CEO, Robert Cheney, and his team to find diamonds in the rough, negotiate a win-win proposition, and build a leveraged business operation with enormous upside.

To give you an idea of how profitable the company’s wholly owned subsidiaries are, I want you to take a look at this chart:

Sparks, which is now held by C21 Investments (CSE: CXXI) is a superior retail business, even compared with the world’s most recognized high-margin brands, such as Apple, and Tiffany’s.

So far, the management has focused on Nevada and Oregon, but after my 1-on-1 Q&A session with the CEO, my vision of the scope of this opportunity changed dramatically, as I learned that he is eyeing several other states, as well as international expansion.

This is my winning horse for the cannabis legalization, wealth creation race. 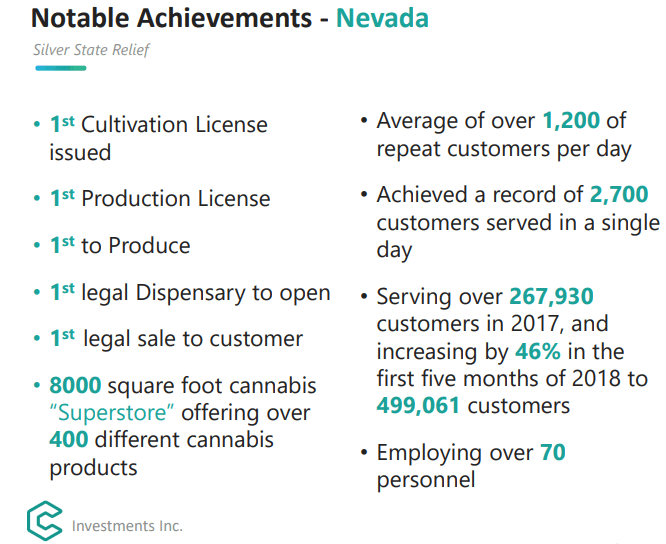 One of the company’s acquisitions in Nevada, Silver State Relief, is so solid that it shatters records practically every passing month.

I’m surprised C21 Investments (CSE: CXXI) is even public. It is so profitable and promising that a large private investor or a competing company is likely to make a bidding offer to take over this stock, but current shareholders won't accept anything close to today’s open market price, in my opinion, since I certainly wouldn’t.

The potential growth spurt in the coming 3-5 years alone could rival my best investment ever, which returned over 1,351% in two and a half years. 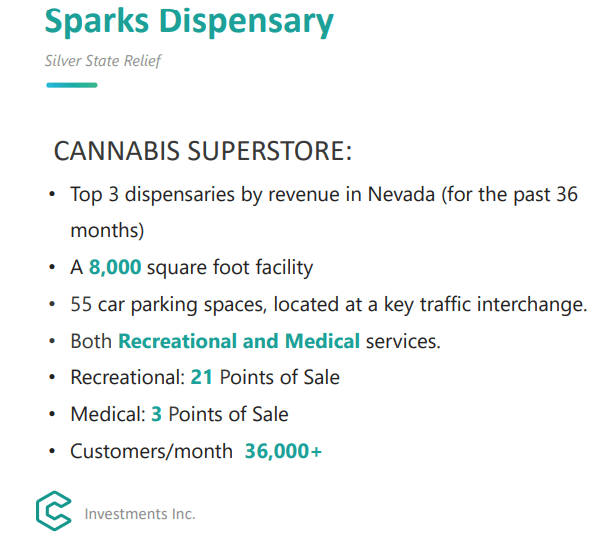 Outside of NV, the company also has a booming operation in Oregon, which is about to supercharge to the next level.

It’s mind-boggling how the share price is so cheap, but part of the reason is that the company is so new that most investors don’t know anything about it, just like no one knew who Warren Buffett was, even a full decade after he had started and succeeded at investing.

Examine these incredible stats out of Oregon: 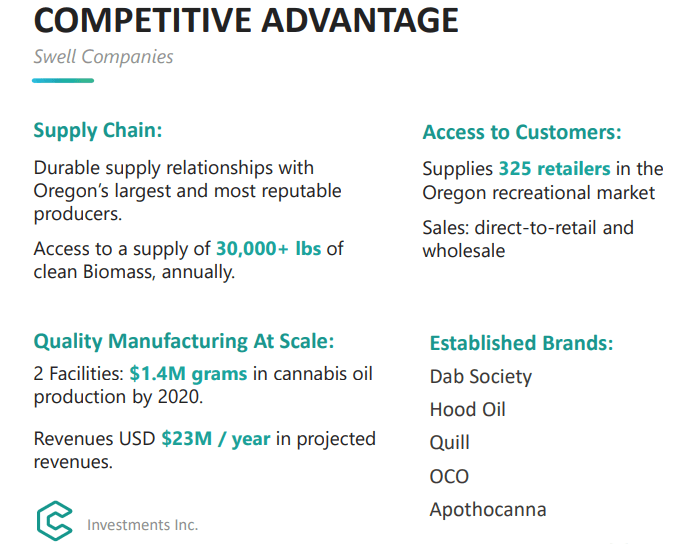 Swell, the company that C21 Investments (CSE: CXXI) acquired is on the launching pad, with the lion share of the growth well ahead of them.

I’ve rarely come across these sort of moments in my 18 years of investing, since finding a disciplined capital allocator, such as this CEO, and a strong team behind him, takes 2-3 years sometimes, if at all.

Each time I was able to pinpoint such human talent, it resulted in triple-digit returns, which is why I’m personally accumulating shares of C21 Investments (CSE: CXXI) right now.

Legal Notice: The ideas, projections and views expressed are those of WealthResearchGroup.com and are not ideas, views or recommendations of C21 or any of its officers or directors. Any forward looking statements are based on our assumptions, projections, beliefs and expectations, however, there is no guarantee that these statements will prove to be correct and are subject to risks and uncertainties. This work refers to joint ventures or investments that C21 is a party to. Some of the joint ventures may be subject to further negotiation or documentation. Never base any decision off of our emails. CrushTheStreet.com stock profiles are intended to be stock ideas, NOT recommendations. The ideas we present are high risk and you can lose your entire investment, we are not stock pickers, market timers, investment advisers, and you should not base any investment decision off our website, emails, videos, or anything we publish. Please do your own research before investing. It is crucial that you at least look at current public filings and read the latest press releases. Information contained in this profile was extracted from current documents filed with the public, the company web site and other publicly available sources deemed reliable. Never base any investment decision from information contained in our website or emails or any or our publications. Our report is not intended to be, nor should it be construed as an offer to buy or sell, or a solicitation of an offer to buy or sell securities, or as a recommendation to purchase anything. This publication may provide the addresses or contain hyperlinks to websites; we disclaim any responsibility for the content of any such other websites. We were paid three hundred thousand and one million eight hundred thousand RSU's, we also participated in a private placement for two hundred thousand shares that are currently restricted to the four month financing hold. Please use our site as a place to get ideas. Enjoy our videos and news analysis, but never make an investment decision off of anything we say. Please read our full disclaimer at www.wealthresearchgroup.com/disclaimer