I want to show you what a highly-skilled management team, an early-stage industry, and a sound business model, joined together under one entity, looks like in terms of stock price – it’s what we call 100-bagger`.

Hardly any investor gets to bank this type of profit from one stock in a career lasting even 40 years, but these types of companies do exist.

There have been hundreds of them in the past 30 years, trading on the stock market, allowing anyone to participate in their success, yet so few do. 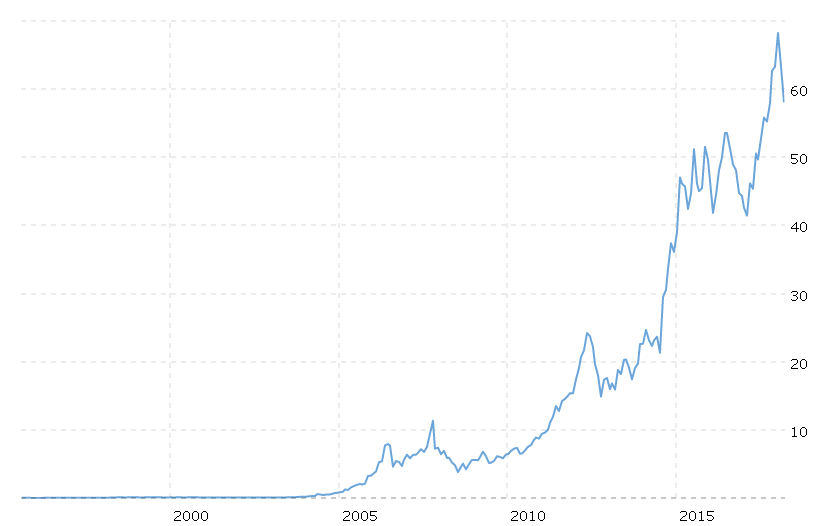 This is a chart of a company, which Coca Cola took over and made private. The chart displays the astounding performance of Monster Beverages, a company, which produces a drink I’ll never consume personally, but many love and enjoy.

I did get to become a shareholder of it, but it was already $18 when I noticed it and $33 when I took profits.

What made Monster Beverages so successful was their management team. The energy drinks industry was only just taking-off 15 years ago, when management made their move. Today it is saturated with competition, but studying the decisions made by the management team is a priceless experience. People can become so gifted in their professions and finding these individuals is the Holy Grail.

Warren Buffett, though, takes a different approach. He invests in businesses, which are so simple to operate that “anyone can do it.” He obviously doesn’t mean that literally, but he makes the point that he wants to be involved with enterprises, which have superior business models and the right people behind the wheel.

Many do not know this about Buffett, but his 1st business was aimed at collecting royalties, since he sees them as a tollbooth – a one-time capital expenditure on the asphalt and lifetime income from passing traffic.

As a teenager, he convinced barbers to lease him a spot in the shop to put his gumball machines.

The barber would collect a royalty for the place he provided Buffett, and he, in return, would collect recurring income on the machine he installed.

Buffett had little success. Convincing barbers proved difficult, so he become obsessed with businesses, which possess a moat – a clear, enduring, competitive advantage – a barrier of entry so large that the business can rely on consistent profits, rain or shine.

I have found a company, which utilizes the royalty model, in an industry, which I think is in even a better position than energy drinks were 15 years ago, with the explosiveness of a commodity-based sector and the most unique competitive moat any CEO could ever hope for – a law barring others from entering this space!

Just like Pierre Lassonde envisioned a way to structure an operating venture in the tough mining world, which would take advantage of all the upside, with as little downside as possible, and created a behemoth, made himself over a billion dollars, and his shareholders more than 100-times their money, we believe that FinCanna Capital (CSE: CALI & US: FNNZF) can become a huge winner, and it has not even been public for 6 months!

Just like many investors have heard about and are frustrated with the suppression of gold prices by commercial banks, so has the situation with the Federal Government been a major cause of concern for cannabis investors for years.

But, instead of looking for ways to fight Jeff Sessions and his antiquated approach, FinCanna Capital has pulled-off a brilliant tactic.

The most important component of any business is money. There has never been any venture, from the days of ancient Greece, which was incorporated without seed funds.

But, since the cannabis industry is federally illegal, the main source of capital for corporations in America, banks, are cautious of giving loans to cannabis companies. In fact, they don’t even want to open bank accounts for them.

FinCanna Capital (CSE: CALI & US: FNNZF) is operating in a sector, which Uncle Sam has effectively made impossible to enter, unless you’ve incorporated in Canada, as a royalty company, which is what Andriyko Herchak, the CEO and president of the company, has been able to achieve.

FinCanna Capital gets to choose which companies get their financial support, since all the cannabis businesses need start-up funds.

What’s brilliant about this, as their company’s ticker implies, is that they have decided to implement their strategy in California, which is the absolute king of this industry.

This is the 1st time I’ve been able to find a royalty company, which is still cheap and under the radar, and the reason is because institutional investors still shy away from cannabis, but that is changing rapidly.

This is an early-stage deal – tremendously so. In fact, the company recently went public and has 3 promising royaltydeals in start-up stage, so, right now, it’s off the radar for many shareholders, but once these deals produce revenue, the company will begin earning royalty income, and I believe it will attract quality shareholders, and I want them to bid up the price, since I won’t be selling mine for anywhere close to today’s prices.

Buffett loves to compare investing to baseball. He says that the best thing about his job is that he can choose not to swing the bat at each curve ball thrown at him. He waits until the perfect one comes and then he goes for a home run.

Due to Jeff Sessions and his army of government Yes-Men, cannabis is still illegal on the Federal level, though the polls almost unanimously point to the fact that Americans are in favor of medical legalization.

That’s the niche FinCanna is focused on, and they have royalty deals, with more coming, as the industry matures. They have the luxury to turn down many cash-strapped companies, since they act as a bank, making up front investments into top-quality deals, in exchange for royalties on all future revenues.

A business like this shouldn’t even exist in a free-market society – it is so overwhelmingly advantageous to us, as shareholders, that I’m literally shocked that we are able to partner with them so early in the game.

Their most ambitious royalty deal is with CTI – an 111,500 ft.² planned Coachella Campus, which will include vertical growth cultivation and extraction, manufacturing, testing, distribution, and centralized processing. FinCanna is entitled to complete its funding to CTI in exchange for a Royalty of 14% of CTI's revenues from its Coachella Project.

On top of that, FinCanna also has the right to finance CTI's next 2 licensed cannabis facility projects on the same terms as the Coachella Project – this is huge.

CTI has established an interim medical cannabis extraction facility on the Coachella Property, which expects to produce approximately 3.7 million grams of raw oil per year. FinCanna is entitled to receive 50% of the profits from the Interim Facility.

These two income streams are only the beginning. I absolutely love their 3rd deal, and I’ve shared this with their CEO, since it’s with a tech company, supplying solutions for the industry.

Green Compliance developed the software with Automated Healthcare Solutions (AHCS) and has an exclusive licensing and support agreement with AHCS to market and sell the software to licensed medical cannabis dispensaries and cultivators.

That’s the main reason I want in this early.

Get updates on FinCanna Capital and
more Wealth Building Ideas for the new economy.

Legal Notice: This work is based on SEC filings, current events, interviews, corporate press releases and what we've learned as financial journalists. It may contain errors and you shouldn't make any investment decision based solely on what you read here. It's your money and your responsibility. The information herein is not intended to be personal legal or investment advice and may not be appropriate or applicable for all readers. If personal advice is needed, the services of a qualified legal, investment or tax professional should be sought. Never base any decision off of our advertorials. Wealth Research Group stock profiles are intended to be stock ideas, NOT recommendations. The ideas we present are high risk and you can lose your entire investment, we are not stock pickers, market timers, investment advisers, and you should not base any investment decision off our website, emails, videos, or anything we publish. Please do your own research before investing. It is crucial that you at least look at current SEC filings and read the latest press releases. Information contained in this profile was extracted from current documents filed with the SEC, the company web site and other publicly available sources deemed reliable. Never base any investment decision from information contained in our website or emails or any or our publications. Our report is not intended to be, nor should it be construed as an offer to buy or sell, or a solicitation of an offer to buy or sell securities, or as a recommendation to purchase anything. This publication may provide the addresses or contain hyperlinks to websites; we disclaim any responsibility for the content of any such other websites. We are long FinCanna Capital Corp. and own shares of the company that we will not sell during our active marketing coverage. The company has paid two hundred and fifty thousand Canadian dollars for one year of digital advertising, which includes emails, videos, and interviews. Never base any decision off of our emails. Please read our full disclaimer at WealthResearchGroup.com/disclaimer