Trump has the ear of the country at this point. Most Americans, even Trump haters, are sitting there wondering why America waited this long to slap tariffs on China. The logical sequence that Americans see now is (1) China stole jobs, IP, wealth, and doesn’t respect Americans, so (2) America must teach them a lesson, by (3) weakening them and putting tariffs on their goods, so that (4) trade will be fair, with the inking of the new deal.

Without an actual recession, which other political contenders can blame on Trump’s policies, I see no Democrat challenging tariffs at the debates. Therefore, I see little reason for the average voter to go with Democrats at this point – if they generally agree with the thesis of tariffs, they will vote for the person who put them in place.

It will be interesting to see what these additional tariffs do to the global and domestic economies in the months ahead, especially with Christmas and the holiday season approaching.

What’s interesting to see is how politics are impacting the indicators that were, up until now, considered extremely reliable and are now sending signals, constantly.

Look at the chart above and the one below because they are telling the whole story.

Above, you can see that both the FED and Washington are clearly heading into periods of easing: the FED will cut rates aggressively, and in politics we will continue to see the launch of more incentives for businesses and municipalities to spend money into circulation.

These projections are based on news flow, on the topic of articles. You can see there’s a REAL correlation between publications on these matters and reality. This suggests that in these matters, the media is more credible.

But on the flip side, look at the discrepancy between “America is the hottest economy on the planet” tweets by President Trump and the mainstream media reports of economic calamity.

The chart below exemplifies this meteoric gap: 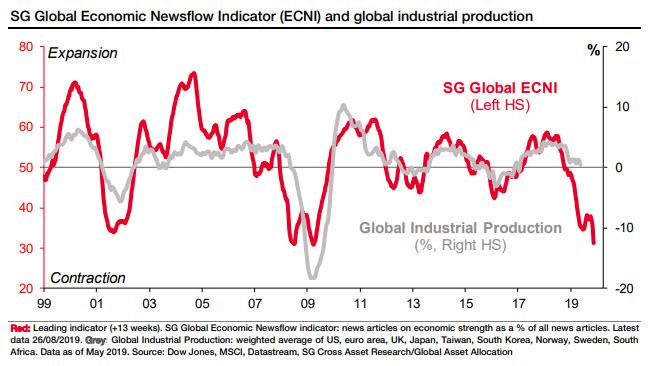 The media is scaring investors like I’ve never seen!

It’s almost like they’re attempting to bend the data in order to influence the next elections.

Here are the facts, which are irrefutable:

On September 18th, the FOMC meeting will decide on its interest-rate policy. Mark your calendars. If the FED announces what I consider to be the nuclear option, silver could be a giant winner.

The dollar is trading at all-time highs right now. This is NOT because the world trusts America, but because it is de-risking and waiting in cash, which creates a need for U.S. currency. It is an artificial rise and will not sustain for much longer. In a world without open borders, countries need precious metals and, therefore, this is FUNDAMENTALLY a political bull market. As you know, retail hasn’t bought into it yet; they feel this is a fake breakout.

Investors are calling the nurse, since they believe the economy is dying, but the mainstream hatred towards Trump could be sending false recessionary signals. Focus on the facts, which are that if silver hits $20.00/ounce, things will go mad for the metal, and that on September 18th, the FED will decide the fate of the global markets.