Right now, everyone is holding tight. 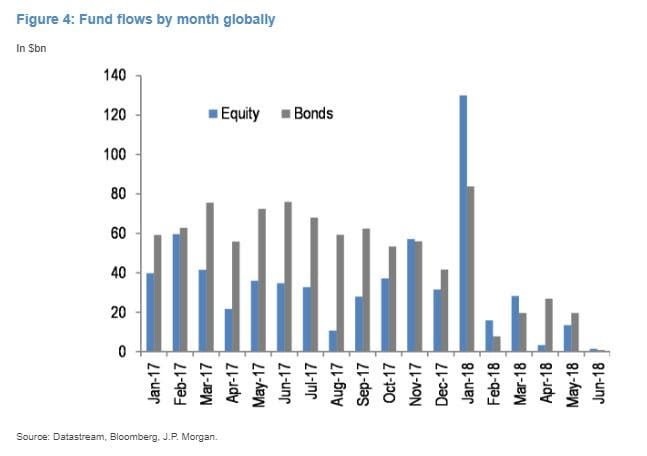 The inflow of funds toward stocks and bonds is extremely low at the moment – the USD is rallying because most investors are baffled by the future trajectory of the markets, so cash positions are on the rise.

You see, on the one hand, we have the one-time stimulus of tax cuts, which make America’s corporations look great, on paper. But on the other hand, interest rates rising mean that profit margins will shrink, as borrowing costs normalize, causing many funds to switch from stocks to bonds or to be willing to only pay less for stocks, in general, prompting the case for lower multiples.

Whichever way you look at it, there’s widespread confusion, and when people are indecisive, they resort to cash.

We all know CEOs of big companies have been shaking in their boots for a number of years, manifesting in the habit of buying back shares of their own companies, especially in 2015 and 2016, when the prices were lower and even today, when they are much higher. However, they cannot afford to do this, going forward, since capital allocation must be devoted towards higher wages, higher material costs, and capital expenditures in growing the internal business.

The reason the markets keep rising is that, historically, for most 5-yr periods, the S&P 500 has outperformed cash, so pension funds, hedge funds, and money managers would rather buy the index than hold large amounts of cash, which are harder to justify to clients.

In other words, hundreds of billions of dollars are parked in equities, not because of genuine, fundamental causes, but due to different reasoning.

This is one wild card, which, at one point in the near future, will change. You see, as interest rates rise, it becomes less advantageous to hold stocks when bonds can yield fair and safe returns.

There’s a balancing act here, and it is tilting between cash and stocks, but with rising rates, cash in money-market accounts might become irrelevant, while bonds take its place.

But, Wealth Research group does see an environment, where bond yields will not be high enough to attract major players, but juicy enough to make investors think twice about holding stocks or cash.

In other words, in the coming few months, as central bank tightening and interest rate hiking accelerates, we see a scenario, in which stocks sell-off; cash won’t be the preferred choice, but bonds won’t be, either.

The excessive, record-breaking cash hoards, held by U.S. corporations, then, will be diverted, for the first time since 2008, to the real economy, to franchise growth.CEOs will begin to put more effort into growing their market share and beating competition rather than pleasing shareholders with artificially high stock prices because America is hitting-up, and Millennials are entering the workforce.

This is how commodities take center stage. We’re already witnessing oil prices above $70, but other commodities haven’t followed suit.

Again, this chessboard has many moving pieces, so diversification is paramount.

This isn’t the right time to concentrate on a few positions and bet the family farm because a paradigm shift could transfer hundreds of billions of dollars from one asset class to another (stocks to cash, cash to bonds, bonds to commodities).

Remember, the trend is towards higher interest rates and elevated inflation levels, so our exposure to commodities is going to work for us, but patience is as important today as it ever was, since irrational behavior exhibits itself everywhere.

For example, while the U.S. is running its largest deficits ever, the USD is rallying big.

Let the opportunities come to you, and keep saving as much as you can, building a wealth machine, by investing mostly in cash-flowing assets.