Why is this Happening?

In August 2002, I passed a 5-day boot camp held in the Negev Desert, where six hundred members of my age group (myself included), from all across the country, were on trial to join Israel’s military flight school.

The sifting bootcamp began on a Sunday and ended on a Friday, and I was dead-set to have my name read that Friday morning by my commander, so I could be chosen for flight school the following January of 2003.

Combat pilots are considered the top of the food chain in the IDF, and those who are suited for this are courted and continue to have illustrious careers in the private sector as well.

I was lucky enough to be part of the 300 whose names were read that Friday morning, but during the course, some five months into it, I was cut, with only 200 course members left (56 actually finished the 3-yr course, from the initial selection of 8,000 soldiers).

I loved it so much that I ended up saving every penny I could from delivering pizzas and working other odd jobs to pay for a private pilot license, which I have kept active since 2008.

One of the things that always fascinates me is hearing about training accidents… worse still, training crashes, which result in casualties — that always bothers me!

If you’ve never seen what training means, watch Top Gun, which is more about combat-maneuver training, but for the most part, what pilots spend time drilling and perfecting are flight emergencies, anything from fire on the wing to fire in the engine or even loss of engine.

I did my fair share of those; the instructor would say, “Okay Lior, imagine that you just lost your engine,” and to simulate that, he would pull the throttle, so the RPM goes to idle (neutral) and the plane immediately loses power and thrust, which translates to reduced speed and increased pull from gravity.

Because it’s a drill, the instructor can end it at any moment and open the throttle back up, so the plane flies normally.

Because of this, I’ve never been able to truly understand the needless loss of life caused by training accidents.

In real-time, when things happen fast, I can understand why a pilot might freeze, make errors, and not follow procedures to the letter. I can also sympathize with the sense of panic that sets in and makes people behave in a manner that isn’t optimal.

Real emergencies are so rare in today’s world that it is customary to actually repeat and announce, “THIS IS NOT A DRILL,” since many pilots have never experienced a real crisis in their careers.

The best way to show you that this isn’t a drill and that the FED can’t suddenly turn dovish and fix the whole matter is to really consider the fact that after all the FED has done, apart from plummeting stock prices and 20-year high mortgage rates and bond yields, inflation hasn’t MOVED AN INCH! 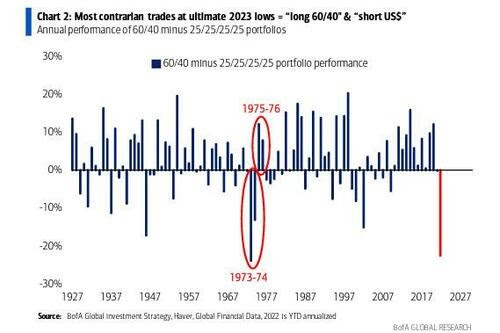 As you can see, the most classic Wall Street portfolio, the 60/40 bond/stock diversification and even Bank of America’s 25/25/25/25 split, which includes commodities and cash, have both gone down this year, but the 60/40 has really seen the worst year since the 1973 oil shock!

The bottom line is that while calm and experienced pilots can survive emergencies, it does take a toll on them, and the aircraft must go through rigorous checks and maintenance before it returns to operation.

So, for any market participant who still thinks the FED is about to turn dovish just because markets are crashing, don’t get your hopes up.