The FED is Failing and Biden is DONE FOR

It could not be any worse!

After last month’s figures gave the impression that inflation has turned a corner, we now that economists are pissing on us with terrible estimates.

Do not listen to any economist right now, because the predictions are futile. 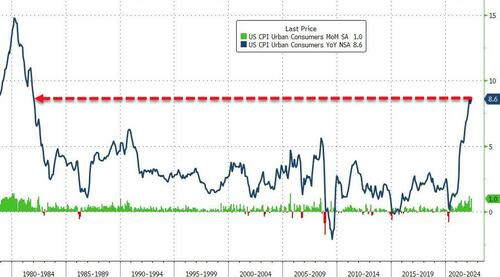 The market expected headline CPI Y-o-Y at 8.3% and it actually ROSE back to 8.6%, showing that everything the FED has been doing and all of the NOTHINGNESS, the sheer inaptitude of the ZERO-IMAGINATION and lack of creativity from Washington, has failed to stop inflation, especially of the most important expenses of our daily lives: shelter {housing, rents}, food and energy {gasoline}.

It could NOT be worse and the only thing I could say that may offer some solace is that MAYBE, JUST MAYBE the person that was elected to run this country now understands that his administration is going to be remembered as the worst-functioning in U.S. history and may now be open to ideas!

There’s an old adage that I believe in and it says that markets bottom, when governments panic and today might be enough to create panic in Washington, where politicians have NO SENSE of what it’s like to pay for shelter, food and energy, so they definitely don’t understand what the average voter is going through!

In July, another 0.50% hike will be announced and in September, yet another one.

In the past 40 years, we have never seen America battling inflation this persistent and broad-based.

We’re in for a rollercoaster ride!

Cash may be trash, but assets might be trashier.