COMMODITIES SURGE TO THE SKY!

After the worst January since 2008 for the markets and one of its worst calendar months on record, the expectations for February’s earnings releases are rock-bottom.

I remember going to a chess tournament in high school against one of the best schools in the country, so the coach sent our best player to compete against a mediocre one from the opposing team, in order to score a victory and boost morale and he lost.

Our team was devastated; if our best chess player can’t beat a mid-level one from the other team, are we in for a bloodbath and a pain-filled defeat?

This is exactly what happened to markets, after META, NFLX and PYPL reported…

If these three are not immune to the current environment, then who is, investors concluded.

And, as you can see, investors are shorting the NASDAQ, in a major way.

There’s always some level of the market that’s short the NASDAQ, if they’re LONG certain individual names, but what we see in the TQQQ (triple-leverage ETF) and the SQQQ (short NASDAQ) tells me that investors have little faith that in 2022, with the many rate hikes scheduled and the mixed U.S. consumer data, the markets are heading much higher.

It’s not just the Federal Reserve that’s tightening interest rates and selling assets from its balance sheet, it’s a global monetary hawkishness regime and the risk-on sentiment is just not there.

We can already see this hawkish behavior in bond yields; the share of negative-yielding bonds is shrinking fast.

The markets have been forecasting this tightening for over a year and we believe that when the FED begins to hike, nothing much will happen at first.

Unlike the present predictions that give a 40% chance that we’ll see a 50bps decision in March, we put the odds at about 10%.

It would be uncharacteristic for them to kick off their hiking cycle with a fireworks display. 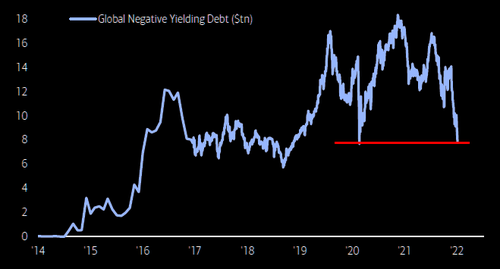 For those, who are comparing this period to the reflation that went on after the 2008 Great Financial Crisis, this bears no resemblance and you’d be served to stop making these. For those, who want to compare this 2016, the data is clear that we’re in a much more inflationary world and that commodities have already well-surpassed 2016, as a basket.

The Bloomberg Commodity Spot Index, which tracks twenty three energy, metals and crop futures, has touched a record this year. That has been driven in part by surging oil prices, which have hit their highest level since 2014:

Another comparison has been made to the Dot.com bubble, but there are so many holes to poke at that theory as well. Isn’t it simpler to say we’re dealing with an economic situation none of us has even seen before?

That’s the main reason for the extreme fear levels; no one has ever seen this financial and economic environment in his life.

One thing that hasn’t change and will never change is buying great companies, for sensible prices, especially after major pullbacks.