Between yesterday and July 12th, we’re in for major news releases.

Yesterday, the FOMC minutes were published.

What’s clear to everyone by now is that markets are basically frozen. 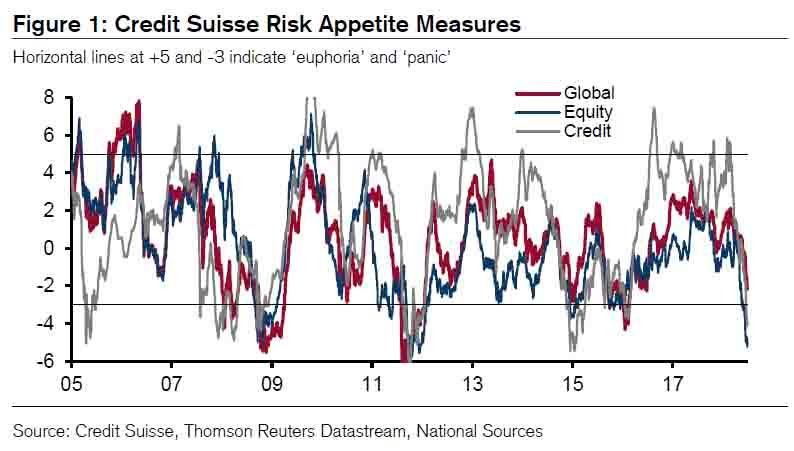 As you can see from previous times, when risk tolerance was this low, a major rally followed.

This was the case in 2008, 2011, and 2015, and as Wealth Research Group noted a number of times over the course of the past year, we expect one final mother of all rallies before this bull market peaks.

Put differently, we’re hitting the bottom for sentiment of the global markets. Europe continues to be a major concern for investors. Trade wars also bring investors to the brink of panic. Then, we have the yield curve flattening, which is always a warning sign for looming recessions. Of course, the S&P 500 has never had ten back-to-back positive years, so investors are not that bullish to begin with.

But I remind you about the eternal lesson of market tops: they end with EUPHORIA.

Right now, investors are not even close to mania mode. Simply go back to 2017’s headlines of Bitcoin to remember how manias feel like. In other words, we are not overly concerned with a bear market for the moment because signs of a top are not here yet.

To start off with, Europe is going to recover at a pace that suits them. Germany is a powerhouse economy, along with France, but they rely heavily on exports, so as the U.S. and China continue growing out of this slow-growth decade, Europe will look better.

Trade wars are overblown, to say the least. No one is fighting the Chinese, and the last thing anyone wants is a physical war, so our most immediate threat is rising short-term interest rates.

The Federal Reserve controls those, so the eyes of the world are on them.

I am not discounting another government bailout down the road for pension funds and the entitlement programs.

In other words, prepare to live in two worlds simultaneously.

One world is the business front, where companies continue to amaze with innovation, creativity, and high managerial performance. We’ve seen unbelievable success exhibited by many industries, and I expect life to become even better for all of us in terms of comfort and possibilities.

Faster airlines, better-quality food, advanced medicine, out-of-this-world technological breakthroughs, higher-quality homes, safer cars, and a wider array of consumer products are coming, but there’s another world where it seems progress is not part of the vocabulary.

They apparently did not receive the memo and continue to drag us down with their policies, which include running giant deficits, lowering taxes without cutting expenses, throwing the middle class under the bus, and the biggest problem of them all, playing monetary games with our currency.

Again, currency-dominated assets are not at risk of terminal decline. Buying a home for $300,000 today doesn’t put your money under the guillotine if the USD goes into the grave in its current form.

Real estate has value, irrespective of USD’s value. If all currencies were to zero out effective immediately, your real estate holdings would be repriced by some new measuring stick for the purposes of trade.

The same goes for ANY asset you own, be it shares of Walgreens, gold, or exotic cars.

Assets that are purely fiat have a higher risk of permanent loss: cash, bonds, or insurance policies.

In the end, inflationary periods are always unique and cause enormous wealth transfers. You’re already extremely educated about the risks of this system, so I know you’ve taken massive action.

Wealth Research Group will update on the major news releases as they hit the public domain in the coming days.