It would have been unthinkable just 30 years ago, but foreigners do not want U.S. dollars anymore. They have simply had enough, and it looks like they have no need of additional ones, either in the short- or long-term.

Washington funds 40% of its budget by selling debt to foreigners, so this sort of pivotal shift in appetite is going to pierce many bubbles. It’s an earthquake.

Take a look at how this chart boils it down: 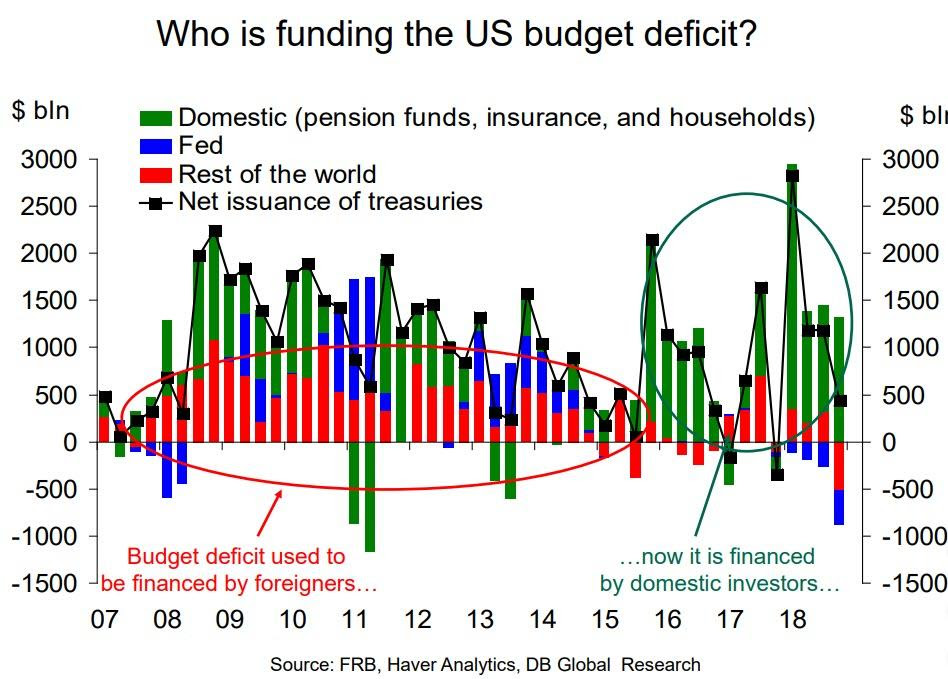 The Great Recession exposed the open wounds in American society that nobody wants to talk about: fewer and fewer people feel patriotic; millions are either becoming ex-pats, migrating abroad, while some are discontinuing their participation in society by going off-grid.

These are major trends.

Tens of millions rely on government subsidies, unable to truly access adequate education that will lift them out of poverty by equipping them with market-worthy skills. Factor in globalization, debt balloons, and the rise of millennials as the nation’s largest demographics in the workforce.

These are not small changes at all. 155 million people work in the U.S. In China, 750 million are employed. The world is transitioning, and this is going to wreak havoc on this country’s ability to pay its liabilities, both domestic and abroad.

In the last year of the 2nd world war, from 1944 to 1945, it is known that the German war machine was essentially in surrender mode. All the top generals knew it. The dictator acknowledged it, but instead of waving the white flag – saving millions of people and being part of the solution – he and his commanders floored it.

They had nothing to lose. When you reach that point, nothing matters anymore. And when you couple desperation with insanity, you get a year like 1944 and 1945, where millions of lives were taken for nothing.

In similar fashion, U.S. politicians are aware that the USD is in surrender mode, so they’re raping it for all it’s got. People who think they’re going to tighten the belt in applying austerity measures are deeply mistaken. Heck, Washington cut taxes and increased the budget in the same calendar year. 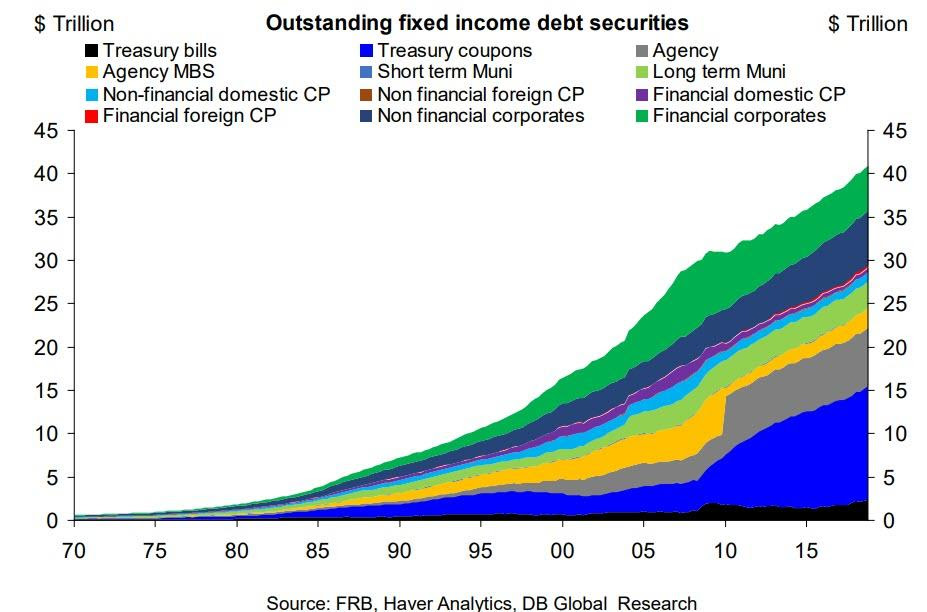 It’s not an easy task, managing the fall of a country. But, when it’s done with sinister agendas by criminal bankers, deep state agents, and globalists, it is even more detrimental.

Look at the surge in debt since 1971. Up until then, this country, indeed the entire world, had a way to curtail fraudulent bankers by holding them accountable to a gold standard. However, since 1971 it’s been a bloodbath – growth, financed by debt. If you’re on the side of growth, you win. But if you’re on the other side, where 90% of the population is situated, YOU LOSE.

This current system is all about corruption and being able to live with it. The elite, the top 1%, are well aware that they’re plundering the planet, but they look at the other side of the spectrum and they don’t want to be there, either.

The system itself is the problem. If business leaders don’t bring about change, voters will through the ballots. We’ll have political race horses inflicting mandatory changes – like it or not.

As I said, it’s a dangerous period. This won’t necessarily happen today or tomorrow, but this decade, for sure. 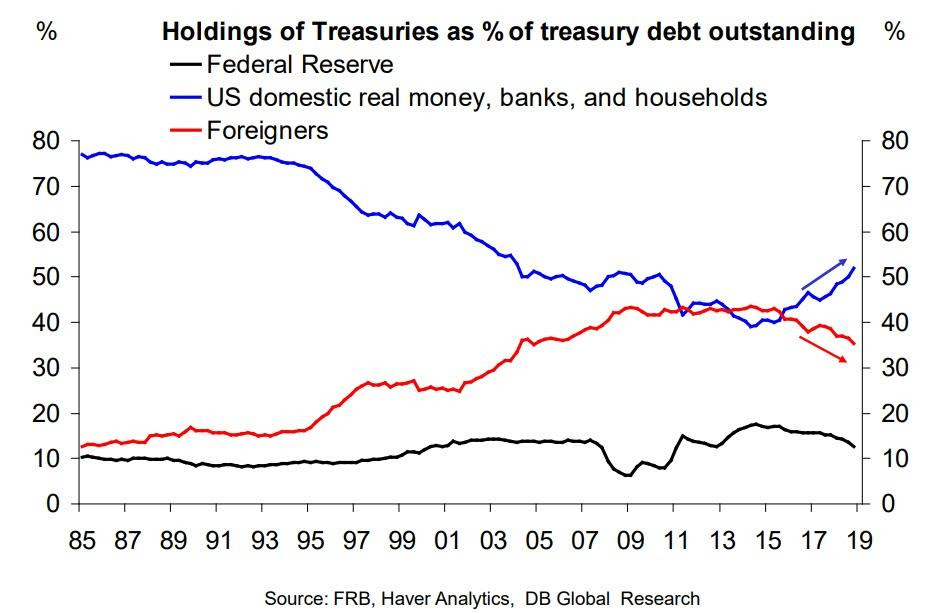 The bigger shifts will occur when the domestic buyers of Treasury debt, who are replacing the lack of foreign ones (as the chart clearly demonstrates), demand accountability from elected officials.

It’s all fun and games when the rest of the world suffocates on USD holdings, but it’s not as pretty when the U.S. suddenly turns into Japan and its own citizens are left, holding the bag.

Before 1971, people didn’t have to worry about a dollar crisis being part of their daily lives. Since 2008, they must expect it.

I have converted 24 months’ worth of living expenses into physical precious metals. If a 2-year recession hits, that is my personal cushion. On top of that, I have an emergency RESET duffle bag, filled with cash for 12 months.

If push comes to shove, this is part of my overall strategy; but in the meantime, I’ve got 75% of my net worth wisely positioned between various cash flowing stocks, real estate, and private lending opportunities.

People live throughout the state of Florida, though hurricanes hit the region on many occasions. San Francisco sits on an unstable tectonic plate. Mitigate risk. That’s the smart compromise between living a quality existence and being terrified 24/7. Risk is part of life; you must adapt to it, accept it and be rewarded for taking it, when needed, and for preparing for it, when that is appropriate.

Yes, we’ll hit a brick wall at some point, but no need to sacrifice your time on this planet in the interim. Prepare sufficiently and keep enjoying this wonderful world.

This work is based on SEC filings, current events, interviews, corporate press releases and what we’ve learned as financial journalists. It may contain errors and you shouldn’t make any investment decision based solely on what you read here. It’s your money and your responsibility. Never base any decision off of our emails. Our report is not intended to be, nor should it be construed as an offer to buy or sell, or a solicitation of an offer to buy or sell securities, or as a recommendation to purchase anything. This publication may provide the addresses or contain hyperlinks to websites; we disclaim any responsibility for the content of any such other websites. We have entered into an agreement for three hundred thousand dollars and five hundred thousand options paid for directly by koios beverages. We have also purchased shares and are long the company. Please use our site as a place to get ideas. Enjoy our videos and news analysis, but never make an investment decision off of anything we say. We have no current business relationship with First Majestic Silver, however, we are shareholders, and have been previously compensated with stock options and forty thousand dollars cash by the company. Those prior marketing agreements have expired. The information herein is not intended to be personal legal or investment advice and may not be appropriate or applicable for all readers. If personal advice is needed, the services of a qualified legal, investment or tax professional should be sought.