We’re on Our Own Now

I’ve spent the past two weeks listening to the earnings calls and keynote speeches of over 25 CEOs running companies in a variety of industries, all being impacted by (1) higher interest rates, (2) supply chain shocks and shortages, (3) the war in Ukraine, (4) Biden’s policies and (5) changing consumer behavior. I came away from this 26-hour research marathon fortified with key insights, and I want to summarize them below.

This is a time of immense confusion! 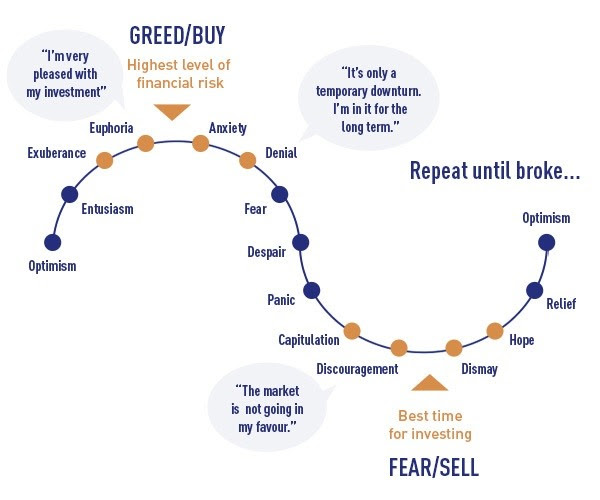 One debate that’s raging on in Davos is about where we are in the cycle, since there’s a difference of opinions on whether or not we’ve seen capitulation.

This is critical, because if we have, things are looking good and we’re nearing the bottom, but if we’re in “Fear, Despair, Panic,” then much more pain lies ahead.

The analysts who think we’re in the “Anxiety” phase justify their view by explaining that it still hasn’t hit home for investors that the FED is not going to rescue them, that risk is now real, that the stock market isn’t a priority for the bank or the administration, and therefore, we’re only in the “Denial” stage.

In order to come out ahead in this turbulent period, you must be both brave and willing to think long and hard about matters, often doing much more research than anyone else; in other words, for the first time in 13 years, it’s NOT a bull market, and other buyers aren’t coming in to bail out investors who made mediocre decisions, and are now making even poorer ones based on the philosophy that the central bank has our back.

Risk, for lack of a better word, has been shifted from the national level to the personal level. The FED feels zero obligation to assist markets and Washington actually doesn’t consider the stock market to be a source of voters for it.

Conflict and war are the norm; atrocities and violence are the rule, not the exception, and it’s important to understand that.

When we go through times like these economic storms of epic proportions, it takes considerably higher sacrifices to excel, but the rewards are FAR BIGGER because of the enormous rate at which others make mistakes.

In other words, by keeping cool and staying poised, a nearly impossible task, the window of opportunity opened to you is as wide as the ocean!

Next Wednesday, June 15th, is shaping up to be the most important trading day of the year, apart from February 24th, when Russia invaded Ukraine.

The FED’s statement and Q&A session, which will follow the virtually guaranteed 0.50% rate hike, will shed much-needed light on the accomplishments that Powell believes have already occurred and how they think about the future.

From my end, I can certainly see big alternations in psychology and behavior. People around me think and act very differently, compared with their attitude one year ago, and what ought to be firmly planted in your head is that this is the time to CREATE GENERATIONAL WEALTH!

The enormity and consequences of the financial decisions you’ll be making in the next 90-120 days can shape the future and destiny of your financial family cell for the next decade.

When billionaires are throwing a tantrum, the magnitude of the moment is unprecedented – this is a time of immense importance.