Debt Crisis Just Hit a Climactic Extreme: What to Do

Debt Crisis Just Hit a Climactic Extreme: What to Do

Debt Crisis Bubble Just Hit a Climactic Extreme
U.S. companies have been buying back their own shares at a record pace this year. 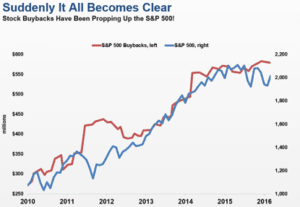 This buyback spree certainly clarifies how the S&P 500 has been able to stage such a miraculous year and hit such historically high P/E ratios.

In 2016, 41 publicly-traded stocks spent more than $1 billion in share buybacks. In the 1st quarter alone, there was a total of $166 billion – a new record for a quarterly buyback amount.

How Long Can This Phony Party Last?

The unsustainable trend is already showing signs of fatigue. S&P 500 companies spent only $127.5 billion in the 2nd quarter, which is a 21% reduction, and it looks like earnings will fall for the sixth consecutive quarter – a clear sign of a recession economy. Total buybacks and dividends in the S&P 500 equaled about 128% of annual earnings last year. That is not sound economics.

Debt in the non-financial sector has more than doubled since the year 2000, reaching $152 trillion last year, and it is still rising. Current debt levels now sit at a record 225% of world gross domestic product.

Much of the borrowing dates back to the boom in private debt that preceded the 2008 financial crisis, according to the IMF. While households and companies in advanced economies started to restrain themselves following the crisis, this deleveraging period is extremely dangerous. Bad debts have ended up on government balance sheets. In other words, since the private debt defaults were so large it caused colossal damage to the system itself, the debt was deemed “too big to be written off” and was transferred to governments.

Now, future taxpayers will have to deal with the mess.

How Debts Are Paid Back in a Fiat Monetary System 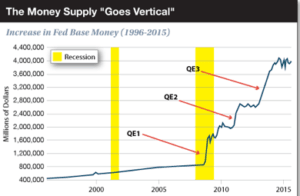 The more there is, the greater the task of taxing the population in order to repay it.

That’s why it is easy to understand that the more robust the economy, the more leverage and debts it can handle. The U.S. government has leveraged the economy to pay for an insane defense budget, education budget, and health care budget, and thus has managed to run the national debt to over $20 trillion. Now, they are starting to pay benefits to 80 million retirees, and it seems like this game of debt is teetering on the edge.

The government is banking on demographic increase – the more citizens there are to be taxed, the more revenue they get to meet obligations. That is the reason it’s so easy to cross the border from Mexico. Mexicans are additional taxpayers, and they reproduce faster than Americans. 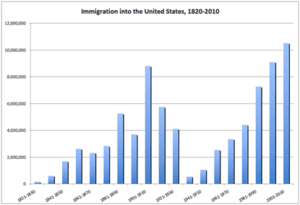 There’s a clear trend here, and since the first days of the republic, it was well understood: the greater the population, the greater the market and the greater the tax system. That’s why China, India, Indonesia, and North Korea are gaining so much power – their demographics are exceptional, as they are young and are becoming richer by the day.

How to Profit from the Coming Deleveraging

At Wealth Research Group, this focus has led to big winners and a wise allocation of assets. In fact, here’s a no-holds-barred Special Report of My Personal Game Plan

The debt crisis is unwinding, and the risk is that it will be mismanaged. The ones that will suffer will be the people, and not the politicians.

Take action and remember that no one will do this for you.