DESPICABLE: This Will End With CATASTROPHE!

DESPICABLE: This Will End With CATASTROPHE!

Today, I really want to put the cards on the table because the numbers that I’m about to reveal are outrageous.

At the age of 13, my father’s business went under for the first time. After rebuilding his reputation, he proceeded to lose his savings on two additional ventures, costing him two heart attacks and very stressful crises that led to depression and other mental scars, along with physical ailments.

In a way, these events shaped much of my early fascination with wealth, business, and entrepreneurship, though. It sent me down a path of self-discovery, which resulted in meeting some of my earliest mentors.

I needed successful adults around me, when I was in my teens, since my immediate family couldn’t answer my financial questions. So I began giving private lessons, as a teenager, in an affluent neighborhood to first-graders, but my real strategy was to connect with their successful parents. Offering basketball lessons to children of wealthy businessmen was my way of getting into the lives of people, whom I would have never met otherwise.

It was on one such ordinary day that a parent asked me some questions about myself, as I was wrapping-up a dribbling practice for his son. I told him that the reason I was working so hard at the age of 14 was due to financial challenges at home. He opened my eyes to the concept of Overwhelming Savings, as he termed it.

Without even knowing it at the time, though I did tell him many years later, he changed my life for good. This person, in less than 10 minutes, told me that I must (1) save half of every penny I generate, no matter what I have to give up in order to achieve that habit. He, then, became very direct and told me, point blank, to (2) never, under any circumstance, have “stupid debts.”

Finally, he looked at me and said, (3) “But don’t expect to become wealthy by saving. If you desire riches, become an indispensable employee, or build businesses and invest.”

This person inspired me to become an addict of saving money. If all people just saved, there would be no global epidemic of ungodly proportions of DEBT.

I’ve never had a debt problem because of this man. On top of that, saving has always given me peace of mind and some wiggle-room to make mistakes, but it was his last remark that birthed the journey of devoting thousands of hours to developing specialized business skills, quite early on, nurturing the love of becoming indispensable to someone else.

My father’s mistakes, in hindsight, inspired my initial move towards taking over responsibility over my own life at the age of 13 and onwards.

The United States is 10 years into an economic expansion. Its stock market has enjoyed a 10-yr bull market. Real estate prices are back above 2008 levels. Unemployment is at record-low levels. Wages are rising for the first time in decades. Everything looks good, except it isn’t.

Washington is on pace to run a $1.2T annual deficit.

It is, at times, hard to wrap your mind around this number, but it means it is over-spending by $3.2B every single DAY! 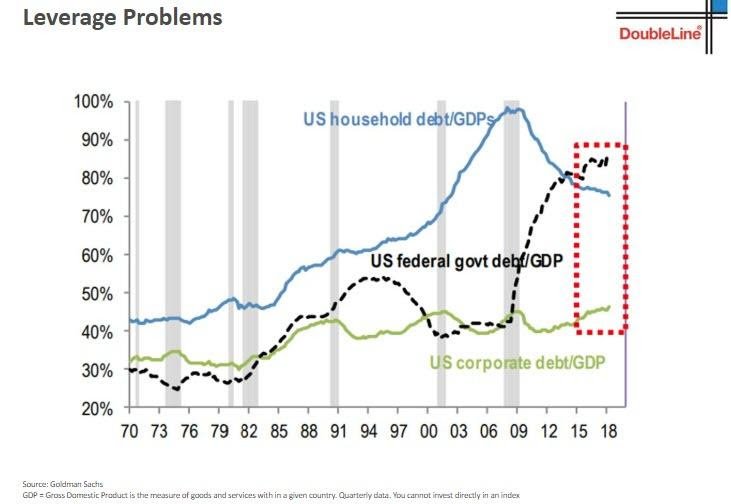 For decades, smart people, who care about their country, have been warning about the abuse done to the dollar, about a financial reset, and about a system implosion, eventually.

U.S. corporations, even after all the loans they’ve taken on, have always maintained a maximum of 45% debt/GDP ratios, but the government and the consumer are on the path to financial ruin, as is very noticeable from the chart above.

People must snap out of the illusion they hold about the currently functioning system. Things, as they are, will cease to work, because debt collapses under its own weight.

It’s pointless to time this event, but it is mandatory to prepare for it. In the same way that a snow avalanche begins, seemingly out of the blue, by the addition of just one more flake to the powder, so does this mountain of monetary obligations will, without too many warning signals, come undone.

The first step to riches is to commit to achieving it. The willingness to change and improve, on a daily basis, requires elasticity of character. It involves the ability to forgive yourself for all that has happened thus far, using the past only as a tool for inspiration, not as a batting club, to hit yourself over the head with for any errors in judgment.

Be at peace with your current situation, because you must embrace reality to be able to analyze it, truthfully and objectively. Accept responsibility and start drawing-up your plan immediately, using your current circumstances as the resources needed to get to the next level.

As you can see, by doing that, you’ll be following the opposite path of the majority of other people and the government.

When the day of reckoning comes, when this avalanche rolls down the slope, taking everything in its path, you’ll thank yourself for every decision you’ve made to buy assets, instead of fancy gadgets, to invest in books, instead of in movie tickets, because you’ll be out of harm’s way.

There is no magic pill. Life is a classroom, and it involves hard work to have a blowout year and a breakthrough moment.

In going over the filing of over 122 mining stock, in order to find our next big winner, I’ve had this breakthrough moment only a few hours ago.

It’s a company that is so unique that I’ll be making calls to several of these parents, who have kept in touch with me, to show them this opportunity, over the weekend, because the potential of it is unlike any company I’ve ever found.

Right now, I’m preparing for a call with the founder. The shareholders are some of the most sophisticated and deep-pocketed resource gurus alive, so I know that they’ve been quietly building their positions. Therefore, I will publish a full-blown report this Sunday, at 09:00AM CST, with all the details.

As gold again touches $1,300, momentum is gathering in this sector. You can feel it. This could be the blowout year!