Knocked Some Sense into Us

*** NOTE: I’ve added a very valuable REPORT at the bottom of today’s publication ***

For the past six months, I’ve been playing table tennis every Thursday against another player. He is a wealthy guy engaged in liquidating failing businesses, and he LOVES table tennis.

When I told my wife that I wanted to pick up “Ping Pong” again, after not playing since I was a kid, she kind of brushed it off and thought I was being childish or weird, but the more I’ve been playing, the more I love it.

For one, it’s MANO A MANO, just you and the other guy, the opponent – a solo sport.

If something goes bad, it’s because of you, and if you’re in the zone, it’s credit to you… no one is there, except for you.

The other guy and I share the same coach, and while I play for 30 minutes with him to warm up, before going head-to-head with the other player, he trains with the coach for hours every week.

Here’s the thing, though: The coach told me that he thinks I’ve been needing to buy a better racket for weeks and that’s the one I played with last Thursday.

Up until now, my opponent’s racket gave him a clear and unquestionable competitive advantage, which I didn’t factor in. I ascribed his winnings to the fact that he’s been playing for five years, three times a week, while I was playing for just over a year, once a week, but I was wrong!

My coach told me I had better form, better physical ability and that he expects me to beat him soon; he implanted in me the idea that I actually should be winning and that this whole time I was allowing myself to feed into this excuse, when all I needed was to switch rackets and understand that he’s got nothing on me.

2022 has shaken the confidence of both gold investors and stock market investors; nothing worked! Inflation was stubbornly high, the best companies in the world were struggling and refusing to do the right thing, until, just like when my coach talked some sense into me, the FED made sure that neither Wall Street, nor Silicon Valley were living in a movie, in the bubble where life is honey, flowers and cappuccino lattes all day.

The real pain is now on!

The dollar suffered its worst week in two months and entered a technical death cross!

Gold, meanwhile, entered a pattern called Golden Cross, which means that the rally is in place, and I expect the next FED meeting to push its price up to over $1,950/ounce! 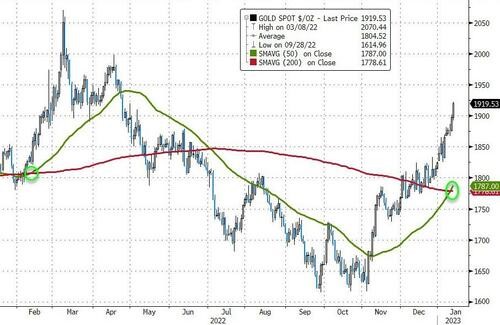 Lastly, as I said above, I spent the year (2022) putting this together.

In THIS link, you will find my entire watch list portfolio; it took 12 months to assemble, and my hope is that you’ll spend time enjoying it and learning from it.

Let’s have an INCREDIBLE YEAR!