The walls are closing in on the global economy and it’s clear that the organic forces of inflation, which erupted with vigorous force in 2020 and 2021, were ignored, almost incompetently, by Jerome Powell. His biased approach to inflation, dismissing it as a thing of the past, led to borderline hyperinflationary conditions!

By November 2021, it became so abundantly clear that inflation is not a temporary occurrence and that the strong free markets and the efficiency of the enterprise system would not be able to hold inflation at bay or contain it, so he totally flipped.

From there on, the FED began to reign in on inflation with the most aggressive rate hike cycle in 40 years, with some figures showing that this is worse than the Volcker-era cycle.

It’s extremely difficult, if not impossible, to be bullish about the global economy, when it is clearly in reset mode, worsened by a war in the Ukraine, with global consequences. The real motives for it are geopolitical tension between America’s NATO regime and Russia’s self-defense mechanism, fearing nationalistic forces within Ukraine were about to allow the U.S. army to place missiles within a 5-minute striking distance of the Kremlin. This is the same aggression that led to the Bay of Pigs fiasco in the 1960s, which nearly, just nearly, led to the first nuclear war.

Indeed, we are outnumbered, as the Bank of England indicated that the rush out of the British Pound makes its economy behave like a 3rd-world country, not a nation with a 2,000-year history of dominance. And with one of the pillars of the Swiss banking system, Credit Suisse, showing signs of utter collapse, all indicate that this reset is happening too fast for the liking of its victims. 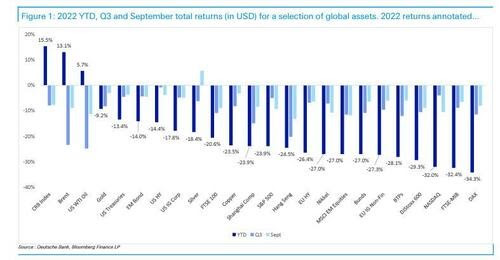 As you can see, when the world’s central banks deleverage the global economy at such a rapid clip, it catches most off-guard, especially after being the sugar daddy of equities for thirteen consecutive years.

The question then becomes one of tactics: How should the individual behave, in the midst of a storm over which he has little control?

Should you join the ranks of the central banks, which are draining the system of liquidity and making cash more valuable by the second, since the availability of it is in a suction vortex?

The central banks are making credit vanish, which means that leverage is becoming more dangerous by the second. In fact, a friend of mine, who is involved in a fund that invests in cash-flowing agricultural farming, told me that the manager shared with him that in 2022, more investors had called to ask for redemptions than in all prior years, PUT TOGETHER.

Rich and poor, many were living under the assumption that they’d have plenty of wiggle room, since prices only go up!

Now, the latest global institution to scare the average person out of his position is the IMF, which warns of an apocalyptic recession, but the truth is that if your assets can withstand a recession, there is very little incentive to sell them to someone at the lowest point in the cycle.

In the big picture, the global economy came out of the Goldilocks economy of 2018 and 2019 and felt invincible, which led to poor financial choices and euphoria. As central banks deliver a crushing blow to these, look at your own financial decisions and figure out whether you were swept into this ecstasy, and if your own holdings are ready to perform well, even as the recession intensifies.