The survey polls are clear-cut: legalization is a matter of WHEN, not IF.

In Canada, cannabis is already legal. In the U.S., many states have already legalized use for medical purposes, recreational purposes, or both; but in the Eurozone, a market that has a projected size of CAD$66B by 2020, the cannabis industry is like the U.S. in 2013!

As an investor, my role is to GET IN EARLY; and right now, there are no ETFs that invest in cannabis outside of North America, so what I did was conduct due diligence on which companies are (1) acquiring the first government licenses in the EU, (2) making strategic investments in brands that appeal to European consumers, (3) forming relationships with suppliers and with distribution chains to spread their products efficiently and profitably, and (4) WHO IS DOING IT FIRST?

All the other questions were answered by one company, which I consider as diversified as actually owning an ETF, since they have licenses in over 14 countries!

In some of these markets, they are either the first or SOLE licensee, which gives them and their shareholders a massive early-mover advantage.

In Europe, they already have a foothold in 11 countries – one of which is Germany, where the potential is immense.

I’ve never been as sure about the prospects of a business becoming a stock dominator as much as I am this. As my research partner puts it, this has the potential to become “Europe’s Canopy Growth.'

They’ve just raised CAD$45M, which means that their balance sheet is rock-solid, a prerequisite for me before I pull the trigger on any opportunity.

Not only do they dominate the European market in size and scope, but they’ve also just acquired incredibly valuable assets. 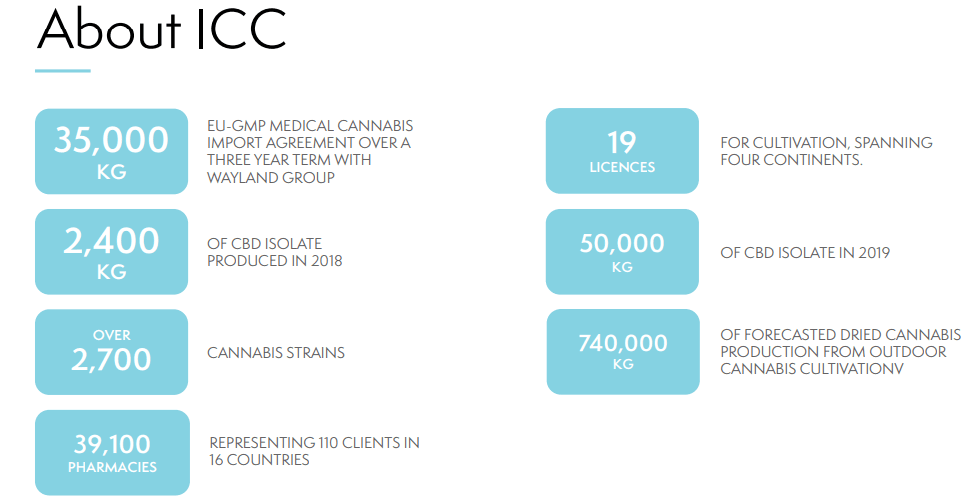 As you can see, they have taken major steps in the past two years to become the largest GLOBAL cannabis-focused company on the planet.

Through their subsidiary, Cosmos Holdings, they have gained access to a distribution agreement that reaches 39,100 pharmacies in 16 countries.

But what really astounds me more than anything else are the following three critical points:

⦁ Valuation: The company has a market cap of CAD$200M, which is USD$150M. Their German facility is huge and is one of the ONLY three in the entire country with an EU-GMP medical grade permit. Its replacement cost alone is USD$125M, and with their CAD$45M cash in the bank, this translates to a situation where shares are trading for the value of the cash and the German replacement cost alone!

ICC International Cannabis (CSE: WRLD.U & US: WLDCF) has secured a 3-year, 30M Gram cannabis agreement for import into the EU from Canada at a fixed price with the Wayland Group, a company of which they acquired 49.9%.

The estimated profit is USD$90M per annum, so that alone is USD$270M, close to twice the current market cap!
To make this easy to understand, it's like buying a house for $100K, which would then generate $300K in rent for the next three years, all things being equal.

⦁ The European Healthcare System: Another JV partner of theirs is BuyWell, which could become one of the key suppliers of cannabis products for the European market.

These are the types of legacy partnerships that potentially create fortunes for early shareholders of the company.

⦁ Valuable Brands: One of the critical new JV partnerships is the license their management has negotiated with ABG, for the purpose of distributing products under well-known brand names.

Going forward, the company will create cannabis products with the power of these brands behind them.

Combine all of these into one package: the early-mover advantage, the healthy balance sheet with close to CAD$45M in cash, the diversification in Europe, the 3-yr agreement with an estimated USD$270M profit potential, the brands portfolio, and the distribution network that includes 39,100 pharmacies, make this the BEST cannabis company for the global markets, as I see it.

On top of these, the company actually has strategic licenses across the globe:

This is how a future cannabis powerhouse comes together; and, as I’ve grown to understand this management team, there are many more strategic investments and alliances coming shortly!

Consider becoming a shareholder of

This work is based on SEC filings, current events, interviews, corporate press releases and what we've learned as financial journalists. It may contain errors and you shouldn't make any investment decision based solely on what you read here. It's your money and your responsibility. Wallace Hill Partners LTD owned by the same members who own Wealth Research Group, has entered into a three year agreement with International Cannabis and have received one million and two thousand dollars and one million eight hundred thousand shares paid for directly by the company. Never base any decision off of our emails. Never base any decision off of our emails. Please do your own research before investing. Never base any investment decision from information contained in our website or emails or any or our publications. If personal advice is needed, the services of a qualified legal, investment or tax professional should be sought.

Be an insider of the cannabis sector
and stay well ahead of the game!

Get the Exclusive Report on how to profit from cannabis now!