Charlie Munger, now 95 years old, is one of the most blatant and clear-cut speakers I’ve ever encountered. His style of speech is to use powerful language in ordinary conversation. He uses few words, but the effect is a blast to the audience with a strong message.

Munger is the investing partner of Warren Buffett. Together, they’ve built the largest holding company of its kind in the world, Berkshire Hathaway. They’ve accomplished this through a combination of taking over insurance businesses, a wide array of private businesses, and establishing massive-sized positions in some of the strongest brands on the planet, at times of pessimism, when the share prices were cheap. Their investing style has been studied, analyzed, and has been the subject of countless books. Many of today’s hedge fund managers grew up learning about value investing as well as the principles that Buffett and Munger planted in the American capitalistic sphere.

One thing that Buffett and Munger are famous for is their eternal optimism about American enterprise and the efficiency of the free-market system. Until a few years ago, they rarely commented negatively on politics or about monetary policy, domestically. That is changing, though.

Munger exposed his real thoughts to CNBC by comparing the U.S. to Rome and to the British Empire, asking, “where are they now?” This comes after both Buffett and Munger mentioned that they wouldn’t be surprised by a 50% decline in stock market prices. Finally, in an interview with Charlie Rose that really struck me as unique, Buffett – in a joint panel with Bill Gates – talked about universal income programs and government programs, which are partnerships with large companies formed to rejuvenate distressed areas. Socialism is becoming a frightening reality.

Like Wealth Research Group, these two titans understand that America is losing its prominence as the global leader. They aren’t using the word RESET yet, but Buffett has already mentioned that fiat currencies are horrible stores of wealth, and that printing currency is a dangerous idea, when done at this pace.

But what I really want to show you is how the wealth gap is playing out, in day-to-day life for the majority of Americans, who see the U.S. becoming increasingly like Brazil: a wealthy nation with a tightly-knit elite class and a multitude of workers who can’t easily or realistically make the leap from poor to rich. 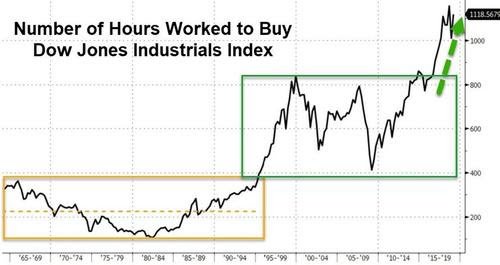 Courtesy: Zerohedge.com
I visit this chart periodically. It shows how 1980 – the year that gold covered the entire dollar supply – was precisely the same year that the stock market was also most affordable for wage earners. In other words, it was fairly traded.

Notice that even after the 2008 plunge, the average worker still needed to work over 400 hours to buy one share of the Dow Jones; whereas in 1980, it took only a quarter of that time.

The wealth gap is here and it’s real. The average person now needs to work 1,000 hours to afford one share of the Dow Jones. That’s preposterous.

Beyond the sheer absurdity, it is a cause for genuine concern. There are tens of millions of Americans, Canadians, Europeans, and westerners in general, who, when reaching the age of 40, see that they’ve been running in circles the whole time and give up on capitalism altogether. Even worse, we see 20-yr olds, fresh out of college, who feel that frustration in advance. 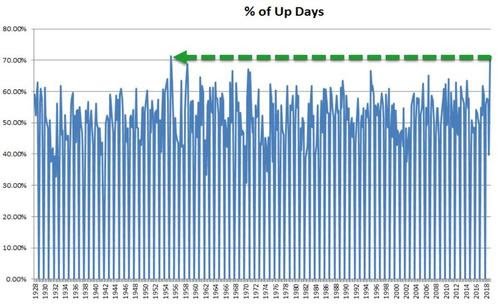 Courtesy: Zerohedge.com
One thing this chart clearly shows is that the stock market has been the greatest wealth generator of passive income in the 20th century and continues to be in the 21st century. The system works for fewer and fewer people nowadays, since the top 10% of the population owns 90% of the equities pie; nevertheless, the gains are REAL.

What’s happening is the western world is in a process of detachment from reality. Retirees want to receive the entitlements that they’ve been promised throughout their lives, while the tax receipts from the working class, collected by the governments of the developed countries, can’t meet the needs of these demographics and stay within the means of the budget.

At this point, everyone knows that the USD is merely a temporary convenience, and not a viable solution. At the same time, the incentive to move away from it is still not strong enough to cause pivotal changes.

It’s like all the developed nations are standing on the cliff together, shackled to each other. Each is holding on to the other, and they will all either jump together or keep starring down the abyss. They’re in constant danger that one of the links will topple over, but at least, for the time being, they’re all out of harm’s way, by not tempting fate.

Foreign investors dumped over $77 billion in US treasuries in December – the most on record. So while they’re all holding hands, the situation is more complex than meets the eye. Pushing one nation down to the abyss in order to save others is an option – but it looks impossible, as the one being pushed off is likely to take others with him. 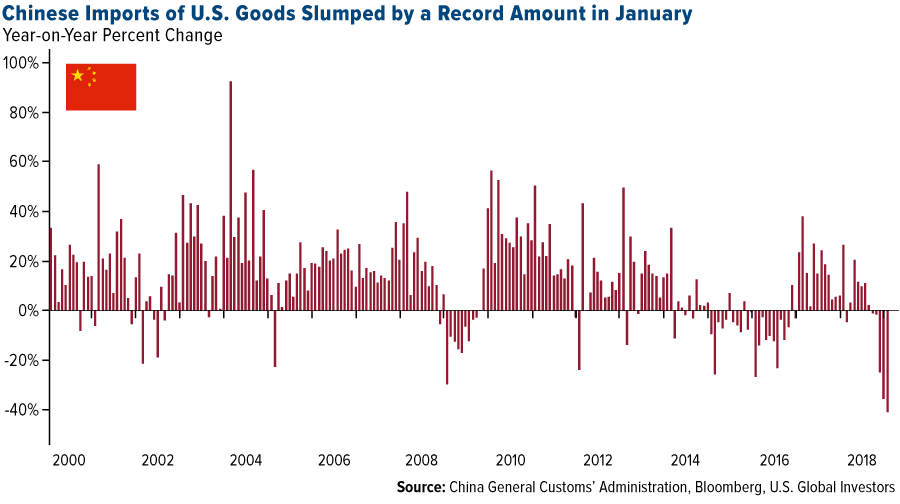 Courtesy: U.S. Global Investors
For one, the U.S. now has a president who isn’t scared of challenging the status quo. Empires normally like smooth sailing, but it looks like the time has come to break the old rules. You can see how the tariffs are impacting imports.

What’s likely going to occur in the years ahead is a total change of the landscape, politically and economically. The dollar is the casualty of that change; this I need you to know.

President Trump is renegotiating trade deals, cutting red tape, and changing the tax code, but what is being projected to the rest of the world is that the U.S. has a funding problem. Trillion-dollar annual deficits aren’t normal, but they will be happening for the coming decade.

We’re living in two realities at once, which is difficult for most people to comprehend. On one hand, the stock market is generating huge gains for our portfolios. On the other hand, the societal cost of keeping the markets up is piercing a deep wound in our capitalistic system, by way of monetary stimulus that benefits the upper-class and erodes the purchasing power of the bottom 90% of the population.

Build wealth. There is no alternative. Choosing anything less than unreserved commitment to daily improvement will prove risky and foolish.

Focus. The opportunities are global and you must be ready to seize them.