It was late in February 2020, a Friday morning. My hedge fund manager and I were headed for breakfast and the images of people dropping dead in the streets of China were being broadcasted, but the panic hadn’t yet hit Europe or America.

The selloffs had begun, but the consensus was that these were the ordinary profit-taking kind, so many brushed it off as saying that markets were at all-time highs, so that’s all it is.

My plan for that morning was simple; I wanted to see where his head was, so I took him to grab one of my favorite sandwiches in another city so we could talk on the way. From there, I took him to a flight simulator for some epic fun.

I can still remember the 21st of February 2020 as if it were yesterday, because just as we said our goodbyes, as I was planning to drop him off at his apartment, his boss called.

They began a 1-minute conversation, which turned into 45 minutes, and I got a glimpse inside the head of one of the top-performing fund managers in the country for the past four years.

I want to share four key attributes of his character, which allow him to excel so clearly above the rest, as well as what my hour-long meeting with him yesterday revealed to me about his current overview of equities.

When speaking with his boss, the conversation wasn’t about trading strategies, but about how to handle redemptions.

Funds that have to deal with clients requesting to get their money out must force-sell positions, in order to meet those capital outflows.

When I looked at my own portfolio, I was confident the companies I held weren’t part of the group that would be disproportionately hit by the lockdowns, so I saw my portfolio plummet, but I didn’t sell a single holding.

To the contrary, I was BUYING.

The government’s and the Federal Reserve’s indication that this is not the public’s fault – which means they’ll backstop and support equities – gave me the confidence not only to not sell, but also to buy the dip.

For many years, my motto was that markets are rigged to go up and remain expensive until everybody believes it, and then it turns into an unsustainable bubble.

It’s one thing when markets are overvalued but not raging with retail activity, but when the entire world is buying equities and bidding valuations, it can only last for a short while, before it poisons society with risk-taking, splurging and inflationary problems.

The muscle memory of the investing public is that markets are still subject to the whims of the Federal Reserve and that at some point, they will not allow investors to go bust.

What my fund manager and I were discussing is where that FED PUT is. 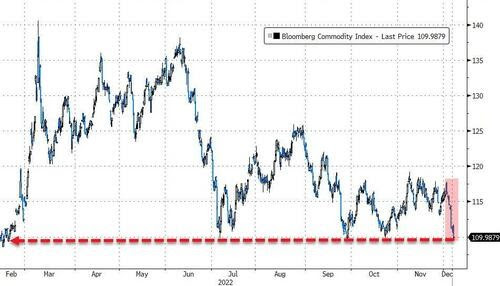 As you can see, the commodity index is on the verge of breaking below support, after testing it for the 4th time.

The Federal Reserve and other central banks deemed supply chain inflation and commodities inflation as their chief enemy.

For the past three months, we have witnessed a meaningful decline in commodities inflation and in port congestion.

The people I speak with don’t give a damn about growth right now and are highly liquid, parking their cash in short-term bonds, awaiting another major leg down in prices.

It is, therefore, prudent to have exposure to gold and silver, the two metals that don’t trade as commodities, but as money. The bottom might be in for both.