A Map of the Hidden Treasure

One of Canada’s largest mining investors’ biggest winning trade has been with a company that has discovered an enormous gold project just recently. I’ve rarely seen such a success, as he’s had with that company.

What he did should be studied by all resource investors, worldwide.

And, while that company has already soared by thousands of percent, this billionaire mogul’s actions show me that he’s a huge believer in this area: 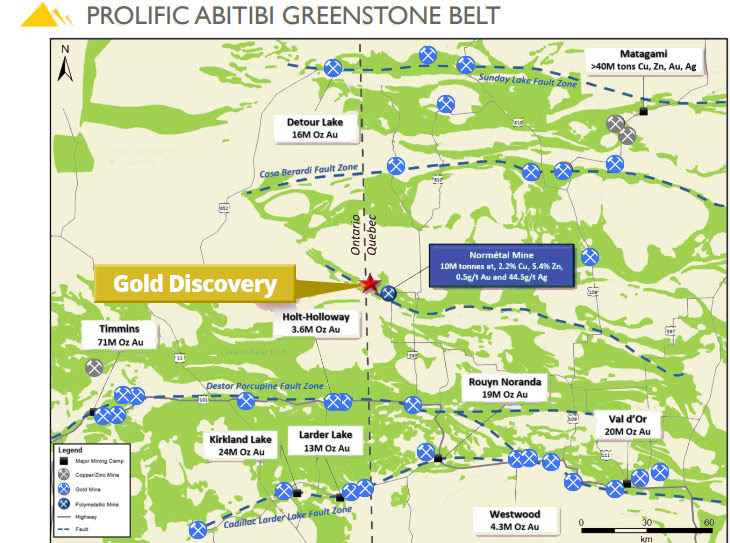 This area, in the Abitibi Greenstone Belt, is where this billionaire is a shareholder of several companies, some of which have already rallied by thousands of percent, is EXACTLY WHERE my market idea is situated!

You see where the star is? That’s one of the most exciting gold discoveries in Canada and right next to it there’s a past-producing mine called Normetal, where 10M tons of ore were historically mined at.

The company I found owns a property, containing gold, silver, zinc and copper, known as a VMS deposit, smack-dab in between them!

Between the star and the Normetal mine, a VMS deposit was just recently discovered!

This mining mogul’s success at the Abitibi Greenstone Belt, which includes several companies, had brought my attention to this area and while I was in search of gold, what I found is even better; a VMS deposit is rare, because it contains multiple minerals and is robust and has long mine lives.

Even more interestingly, the Chairman of the company that owns that gold discovery saw the results of the drilling holes made by the company that’s right next door {my idea} and has joined their team as Chief Technical Advisor!

He knows what’s up and now you do too.

What’s even more insane is that the company that owns the gold discovery just raised $43M in its recently-announced financing, which is an enormous sum, reserved for only the best of properties.

I think we have a huge opportunity here and I’ll cover the whole story tomorrow at 09:00 AM CST.