Since February 1st 2020, I’ve been living in Tel Aviv. The Economist just ranked it the most expensive city in the world. It is hard to imagine a period, just two decades ago, when people feared visiting Tel Aviv, because of frequent suicide bombings in the early 2000s, and since many parts of it were considered dirty and dangerous.

Just a few months ago, through the large, aquarium-like glass living room screens/windows at the 9th floor apartment I’m renting, we saw missiles in the sky being intercepted by the hundreds.

The Iron Dome interception system, which Israel deploys, attempts to figure out which missiles are on a trajectory toward residential areas, and launches a counter-strike to defuse it above the skies, by colliding with the one coming from the Gaza Strip.

As 4,000 missiles were fired at Israel’s civilian targets, in order to invoke fear and disruption of the daily lives of its residents and pressure the government into making concessions, the Iron Dome’s A.I. was able to intercept (right above my head, I might add) 90% of the incoming bombs.

At that point, after understanding how effective and efficient it is, especially since most buildings have mandatory fortified shelters, my concern shifted to retaliation by the government and political muscle-flexing, which could escalate a transitory and temporary (albeit uncomfortable and frightening) situation into something much worse.

This, in a nutshell, is what the markets feel about inflation right now. The contention is that it is like a battle that Hamas is waging against Israel: Just as their firepower is finite (because it’s costly and leaves them empty of ammunition for years), if they exhaust it and subject themselves to scrutiny from the international community for aiming at innocent civilians, so is inflation temporary, but still very much a problem.

Ceasefire is something we all hope for, just as much as we want lower prices for our everyday items, but at times, we need more patience than we assumed initially.

A couple of days ago, another massive attack was launched, figuratively speaking: Producer Prices printed a record-breaking 9.6% YoY rise! 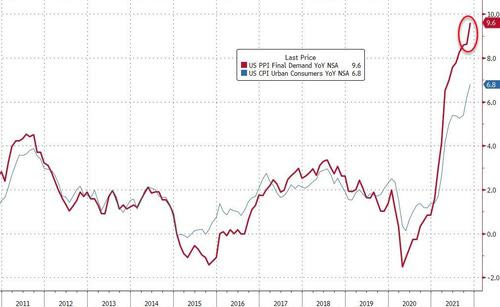 Much like Israeli citizens, the market is accustomed to these by now. Unsurprisingly, to anyone who has been through these before, the real concern is over the power grab that can be made by elected officials, who can lengthen a mostly contained event and make it worse and far more unpredictable.

WHAT DID POWELL SAY?

My takeaways are these:

2022 will be one of the best years for Main Street America in the past 50 years, mark my words. There will be more jobs, better wages, massive retail discounts in stores, and a divorce from COVID. The best is really yet to come!