Over a decade ago, a close associate of mine and a very successful businessman talked to me about investing at the depths of the real estate and stock market meltdown of the Great Financial Crisis; it was September 2008 when he told me the story I’ll share with you, a lesson that has helped me with building poise and taking action in the face of adversity.

When he was in 8th grade, his teacher, a person he actually liked and respected, became nasty and unbearable in his behavior to another student in the class.

For minutes on end, he shouted at this boy, burying his self-esteem into the ground and telling him that he’d amount to nothing, that he should be ashamed of his achievements, and that he’d be lonely and desperate when he grew up.

This went on for a full four minutes, until another student stood up and told the teacher that what he was doing was wrong.

The teacher then told everyone in the class that the boy in question knew about this in advance, and that the whole episode was a social experiment to show how people of good moral values are afraid to speak up for the truth and are often paralyzed, panicked and even speechless, all the while knowing what the right step is to take.

He said he knew that what the teacher did was clearly wrong and outrageous and that he felt strongly about it, constantly wanting to stop it, but too timid to stand up to authority.

He told me that he vowed, then and there, to NEVER allow insecurity from putting the brakes on his inner sense of integrity and justice. He was so disappointed in himself that it was this other kid who got up, and not him.

The teacher was trying to show everyone how good-natured people stay silent in the face of tyranny, while they were studying WW2 in his history class.

​Wall Street and the mainstream media are putting fear into the minds of Americans, causing them to panic-sell and give their equity in the growth of America’s economy to others for a discounted price.

I cannot sit there and watch how people are scared out of the stock market, because of conflicts in Russia, interest rates tightening cycles or supply chain woes, which are creating lasting inflation.

The fundamentals of the U.S. economy are phenomenal and we are re-opening again. Despite this, investors are selling out of bonds and moving to cash! 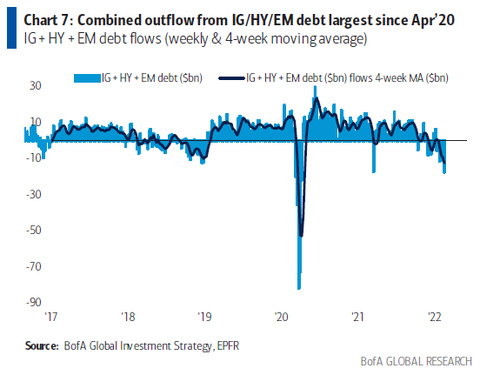 Paralysis is the wrong behavior, at this point. If you understand the potential of the stock market and of growth and corporate efficiency, you understand that businesses just survived a blizzard of troubles, and that the global economy just withstood a mega-earthquake shock.

To protect ourselves, we hedge our equities portfolio with gold, which rose for a 3rd straight week and hit an 8-month high.

What you want to see next is silver hitting above $25/ounce, preferably even this week. Silver MUST SHOW STRENGTH for this rally to continue!