I’m in London. Yesterday, on a Saturday, we took the double-decker open top bus and toured some of the key spots, including entering the City of London, the financial district of the country. In that one square mile of skyscrapers, more economic activity is created, generated and processed than in the rest of the country, combined.

This is where the famous LBMA (London Bullion Market Association) resides and besides seeing the Bank of England and other important financial institutions, I thought about this powerful and very tightly-packed area of office building space and how it is the source of so much riches.

The City of London is not a tourist attraction, nor is it important for the average person, who goes through life in the city, but just like the average American doesn’t think about Wall Street and the NYC financial district that much or cares about who Jerome Powell is, the facts are that banking and credit are the STARTING POINT of all economic activity.

The currencies that denominate our wealth are national fiat currencies and when Nixon gave up on the gold standard, he opened the door to the birth of the purely-centrally-managed monetary policy regime.

In 2022, these monetary policies are in the process of making sure that the credit expansion that went on, mostly undisturbed, for 13 years (2009-2022) doesn’t allow for inflation to spread far and wide and damage every facet of our lives. 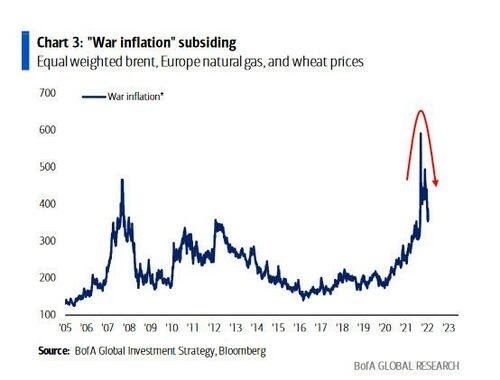 If you look above, you’ll see that what Bank of America refers to as “War Inflation,” namely oil + natural gas + wheat prices, is actually food and energy prices, two categories that most of us call peacetime inflation, since we need to eat and commute.

Wall Street, in its conceit and arrogance, may call it what it wants, but putting this aside, you can see clearly that prices are starting to calm and that’s a real positive.

After the bus finished its 90-minute tour, where we saw the Parliament building, the Big Ben (which is actually the bell, not the clock), Buckingham Palace and Piccadilly Square, we boarded the London Eye, a 32-pod Ferris Wheel that gives you uninterrupted views of the whole city. 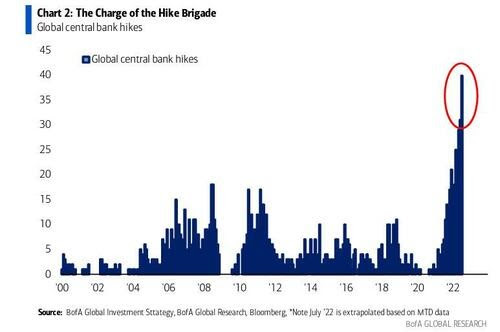 As the wheel began its round, I meditated on the riches of this city, of Europe, as a continent and of the world, as a whole. The human race is incredibly wealthy, but also disturbingly and sadly unequally so. I could see the 5-star hotels and high-end restaurants of Mayfair, where designer clothing is sold for thousands of dollars and worn once or twice and, in stark contrast, I imagined the lives of the many millions that live in the city and its suburbs, paycheck-to-paycheck and are focused solely on survival.

Then, I thought of gold and its role in the human existence throughout the ages and how, through all the innumerable trials and tribulations of the human experience, it remained as relevant today as it ever was.

I mean, London is a city that suffered from a great fire in 1666 and had to be rebuilt. Countless languages and civilization have gone extinct and countless ideas, books and knowledge is no longer valid or useful, but GOLD, nearly in a majestic fashion, is still the best form of money today, as it was when the first recorded discoveries of it were made more than 5,000 years ago.

As you can see above, central banks are tightening aggressively, in order to alter the course of our inflationary recession and, in the process, are putting severe pressure on precious metals prices, just like in 2008 and we think that it’s forming a critical bottom for both gold and silver.

The task at hand, what’s dead-ahead of us, is the mission of surviving the suppression and not giving in. I always think of the movie Forrest Gump and their shrimping boat… Gump and lieutenant Dan did nothing special, except getting through the storm and after that, as the movie goes “shrimping was easy.”

Survive this storm! You will be greatly rewarded!