One of the biggest myths in Wall Street is that fund managers are superior investors. I want you to end today’s letter with a resolved assuredness that over the long-term, very few fund managers are able to grow their wealth faster than the index does.

Get this – only 6 out of every 100 funds, have beaten the S&P 500 over the course of the last 20 years, and out of those, about half were newcomers, so you’d have no resume to rely on, when looking at their background. They are newly-launched funds, so the chances of choosing them are slim.

In order to consistently generate more than the S&P 500 does, you have to realize that 3 major differences separate us from the investment industry and allow us to book enormous gains: 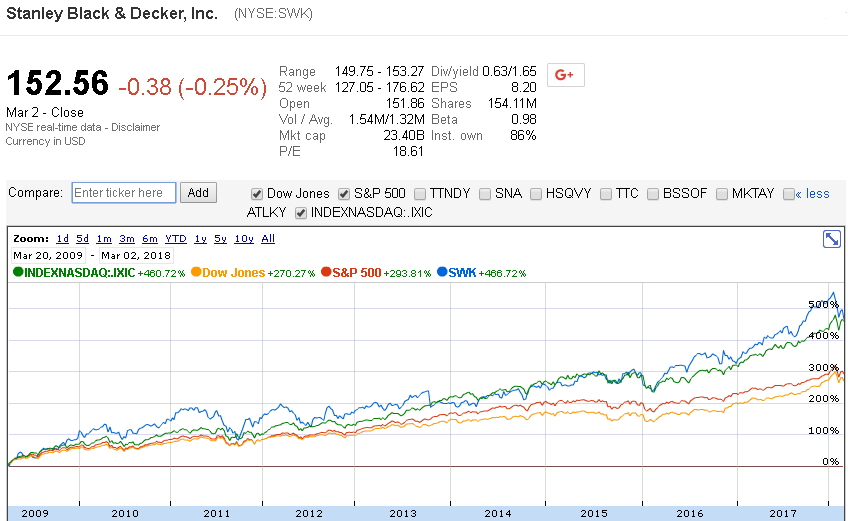 Here’s a perfect example. One of my personal longest-standing open positions is Stanley Black & Decker, which today is quite expensive, after it has gained 466% since the March 2009 bottom, and trades close to its all-time high of $176.

I want you to notice two important chart patterns here – the first being that it has beaten the 3 major indices since the Great Recession, and the second, that for 2 whole years, between 2014 and 2015, it underperformed the NASDAQ.

I, personally, held throughout that period, but fund managers had to liquidate furing 2014 or 2015, since their filings would look better, if they only held stocks, which outperformed indices. They had to entice new customers, while I only cared about investment fundamentals.

During this ’09-’18 period, Stanley’s dividend doubled as well, so the income generated has also accelerated. The difference in terms of fees and taxes are monumental between holding and selling. Remember, booking profits on long-term positions trigger capital gains, fees, and stops your dividend compounding.

Remember this critical lesson – as an individual investor, it’s perfectly normal to underperform for extended periods, since timing the market is next to impossible.

As long as we, as investors, invest with a significant margin of safety, in other words, when shares are extremely undervalued, and, as long as the business behind the stock is improving, it is largely a matter of time before the price follows reality.

That’s where the junior mining sector is today, for example. We all know it is sensationally attractive and cheap, yet it has been so for nearly 3 years already.

Now, 3 long years of waiting can pay-off in 3 months. Remember that this sector ignites like a Formula 1 car, without early notice and goes straight to 6th gear, where it stays throughout the duration of its boom cycle.

We’ve not sat idle during this 3 year period, though. Using a combination of Dollar-cost averaging, short positions on gold using the ETF’s, and aggressive accumulations at the ideal technical moments, we know exactly which companies are the soundest and most capable of rallying and leading the sector. When the sector begins rallying, we’ll have the upper hand.

Here’s a real-life scenario of what I mean. Six months ago, a subscriber, who hadn’t yet opened an exchange account for trading cryptocurrencies, emailed me and asked which exchange and wallet I used personally. After replying, he emailed once more to share with me that he hadn’t been on vacation in 3 years.

I replied that I was taking a big position with HIVE Blockchain Technologies (TSX-V: HIVE & US: HVBTF), as it had just started trading and shares were below CAD$1.00.

This was September 20th, 2017. By November 1st, this stock traded for CAD$4.48, outperforming all cryptocurrencies on the planet during that period.

I received an email the following month. He had cashed-out, taken profits, bought a car, airline tickets, and accommodations at a 4 Seasons Resort that he had been teasing his wife about for years.

Hive Blockchain Tech kept rallying, eventually topping at CAD$6.75, and now it trades for CAD$1.71. I just spoke with Frank Holmes, the company’s multi-millionaire chairman, who is also a fund manager (one of the 6 out of 100, who outperformed for decades), and we went over (1) their earnings and (2) the updated price target analysis from GMP Securities, Canada’s leading blockchain-focused brokerage firm, at CAD$5.35.

Short-term gains are life-changing for part-time investors and a phenomenal tool for us to fund lifestyle purchases, which put a big smile on our faces, especially for employees or retirees, who live on a fixed-income, without many ways of increasing their paychecks quickly.

As it stands, HIVE Blockchain is seriously undervalued and could be on the verge of yet another legendary rally. Again, in terms of margin of safety, it hasn’t traded this low in months, yet their facilities are mining record amounts of ETH, with BTC on the way!

While funds won’t research the cannabis sector or the blockchain sector, until all regulations and procedures by the Federal government have been finalized and inked, we’re already years into our research, forming key relationships with industry leaders and staking our claim with the most undervalued plays.

In the small-cap domain, the volatility is unbelievable, but the rewards for patience and guts are unique to these niched industries.

This Tuesday, Wealth Research Group will be publishing a Special Report on Options Trading, which now can truly juice investment returns. We will also be highlighting the full update on inflation, since the Federal Reserve has just done something, which indicates how terrified they’re getting of a disaster, but not only them…

The list of bears is becoming reputable by the second and includes Bill Gates and the legendary Paul Tudor Jones. They’re warning about the precise issues that Wealth Research Group has been pounding the table on since December.

The narrative is changing, and we’re at the heart of this whirlpool.