GOLD’S NEXT MOVE Will Be Its BIGGEST!

94 years ago, in 1928, my late grandmother was born. Her family had moved from Poland to Germany and settled in Frankfurt. She used to tell me tales from that period, and what always astounded me is how difficult it was to think clearly, without availability of information.

In today’s world, for example, my soon-to-be six-year-old can sit with me and ask me what a whale shark looks like, and I can show her countless videos shot by others on GoPro cameras, getting up close and personal with the whale sharks.

If she doesn’t know the lyrics to a particular song, I print them out in mere seconds, or if I need to read anything that’s ever been said or written about someone or by someone, I literally enter his name in a search engine and there it is.

The world of today is so vastly different than it was in 1928, but human beings are created in precisely the same manner.

Their emotional blueprint is exactly the same and each individual still experiences a battle between feelings of hope, optimism and love, and those of doubt, insecurity and hatred.

Panic and euphoria still dictate much of the way we operate and will never change. Processes of deep thinking and logic are not praised by the majority as much as adherence to superficial social proof.

When we hear a Paul Tudor Jones, a Carl Icahn, a Ray Dalio or a Jeff Gundlach warning about the end of America, a terrible recession, a changing world order or a debt default, our society basically takes them at their word, but we owe ourselves so much more.

There are so many experts out there, whose results and performance are not up to par, yet they are riding the coattails of one great moment or trade, which has glorified and immortalized them. In retrospect, however, the trade may not have even been good, just lucky.

In those 94 years between 1928 and today, there have been other dismal January and February months.

Here’s how those years panned out in the end:

Any doom-and-gloom investor who is parked in one of those companies, which were incredible half a century ago and today grow at 2% or 3% and dish a nice, steady dividend, can laugh at you for buying the dip on the companies of the future and look like a genius for not taking on the risk of dollar-cost averaging—but performance is measured in years and decades, not days, weeks or months.

I want to show you Warren Buffett’s net worth progression over time, to illustrate the advantage of buying every big dip and NEVER timing in and out, but always CAPITALIZING on fears: 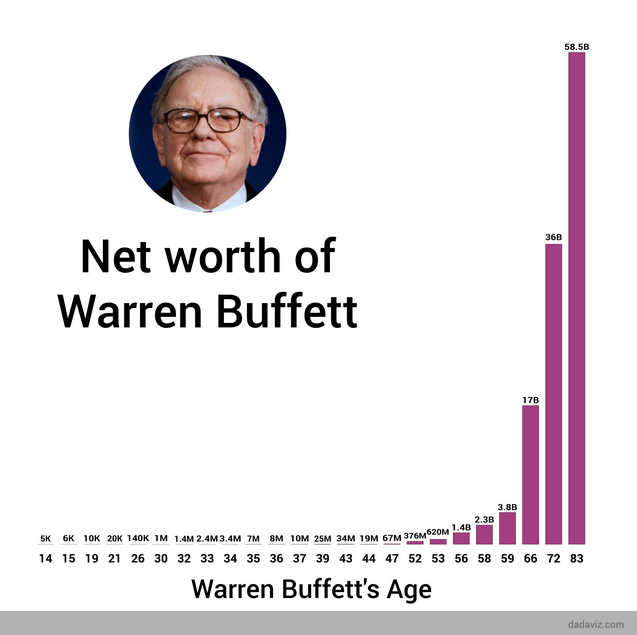 Now, for the question of gold: The FED is about to hike interest rates by 50bps, either in May or June. This will either prompt gold to surge above $2,100 or plummet below $1,800. History suggests that it will be enormously bullish — are you positioned for the biggest move gold has ever made?