Every year, $14T worth of oil changes hands. That’s massive. Oil is the No.1, most traded commodity in the world. For comparison, U.S. GDP stands at about $19T, which means that the global oil market is absolutely huge.

Though many governments, including China and India, are fully committed to clean energy policies, there’s no real alternative for fossil fuels for the time being.

Replacing the global reach of gasoline-powered transportation will take decades.

Therefore, oil dominance has, in the 20th century, been the key to determining what countries will have a leading role in global commerce.

The U.S. has been, for a very long time, the No.1 oil consumer, among nations, but China is surpassing it.

This is critical, because in 2011 I began talking about the fact that mining technology was one of the most ingenious revolutions in the hard assets sector.

Go to any mine around the globe and you’ll see mostly high-level executives over the age of 50. Some are even 60, 70, and 80 years old.

You see, for about 3 decades, between 1982 and 2012, college applicants wanted nothing to do with engineering, let alone mining engineering, but that began changing with the advent of fracking. Young millennials wanted nothing to do with fieldwork. Instead, they wanted tech and finance. So, the mining industry remained stagnant, in terms of modern-tech implementation.

Fracking brought an end to stagnation.

The way I came to learn about this generational disconnect in mining was through my real estate pursuits.

I was in the right place at the right time in 2009, when real estate prices collapsed throughout the U.S., and the housing market was anything but normalized.

In Florida, for example, I was able to buy properties for less than construction costs. In Phoenix, an investor was willing to quitclaim a 4-plex to me, if I’d buy another property off his hands.

It was bad. Banks needed help clearing the glut of foreclosed homes, so I was pounding it, flying to FL, NC, AZ, NV, and CA on a monthly basis, making between 10 and 12 low-ball offers a day on properties.

The way my niche worked was by the fact that, in most calendar months, 3%-5% of my offers were countered, and 2-3 deals were born out of the 300+ offers I had initially made.

By 2013, my niche grew, and we were operating in 5 metropolitan areas when I got a call to come and check out TX.

Up until that time, I ignored Texas and Oklahoma altogether, but after getting to know fracking closely, I was sure the U.S. would be different 5-10 years down the road. Dallas became my biggest moneymaker in the real estate business.

My early gut feeling, which told me that an energy rebirth was happening in the U.S. is coming to fruition today, yet not one in 1,000 Americans knows that the U.S. will be energy-independent in a year or two.

The U.S. has fundamentally changed.

Oil isn’t a small-time game – it’s the big leagues, and China is noticing this remarkable, unmistakable change that fracking has allowed, which is why it is making its move right now.

The U.S. doesn’t need Saudi Arabia, Mexico, or any other trading partner in the oil market anymore, which means these countries won’t be flooded with dollars either.

China sees an opportunity to trade directly with nations, as it is not on course to become energy-independent anytime soon. It needs to import oil. The U.S., on the other hand, is becoming a net exporter. 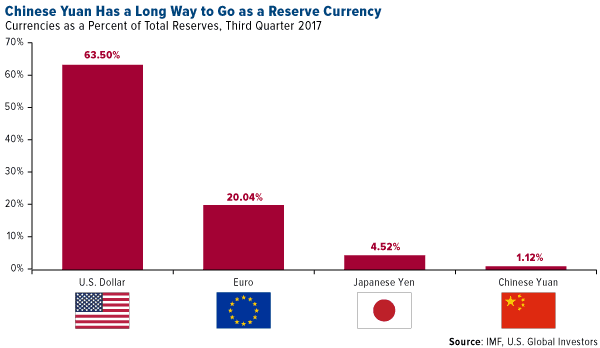 This chart must shock you, but it’s the latest data, and it hasn’t changed much in the months, which followed its publication.

It’s going to chip away at the USD’s dominance by becoming a better trading partner to oil exporters like Russia and Brazil.

China and the U.S. will either trade or clash on this matter, but whoever controls oil, reigns supreme.

China’s oil demand will eclipse anything the world has seen thus far, which forces it to make sure other countries are comfortable with its currency.

Trading oil, while using the USD, makes no sense whatsoever to them.

In May and June, I will be in the field researching the oil rebirth in Texas, arriving straight from NYC, where I’ll be working closely with my partners to see where the blockchain sector is headed next.

Most ICO’s have zeroed-out, and the speculators, who had put their life savings into cryptocurrencies, are learning a valuable lesson right now.

After TX, I’ll be flying to California in early June, to see with my own eyes how the cannabis industry is becoming essential for municipalities and the state government.

For the past two days, I’ve spent all of my waking hours with Mr. Keith Neumeyer, who is in Costa Rica, like me.

We looked closely at each of his companies, as well as companies he backs, as an influential shareholder. Since 1989, he has built two billion-dollar companies, and his main message to me was that patience is the dividing line between winners and losers in this market.

He shared with me how he has seen countless moments where others were selling, while he was holding or buying more.

We back-tested many of his trading decisions, and it became clear that huge gains took Mr. Neumeyer between 3-7 years to grow in potential. He even disclosed to me that in the preliminary 2 years of trading, he is concerned only with accumulating more shares.

“If the entire mining market rallies, then my positions will do well, but the way I operate is to take strategic positions with companies, which can move independently of the sector as well,” he told me.

Mining is truly a small investment class, and whenever it rallies, the inflow of cash resembles shoving a basketball into a garden hose.

Sitting on positions is the most grueling part of this equation, but Keith was very adamant with me that this is where amateurs and professionals seem to part ways.

Amateurs get bored, discouraged, or have liquidity events and are forced to sell, even at a major loss. Professionals, on the other hand, look 3-7 years down the road, know everything about the stocks they own, and build their positions over months, not in one foul swoop.

Keith has shown me his latest public filings. He has been aggressively buying in the past few weeks, and I recorded an exclusive 3-part video series with Mr. Neumeyer, which we’ll be publishing in the weeks ahead.

I own major positions in his companies. In fact, going over the data with Keith, around 80% of the mining portfolio is tied to him.

This will turn out to be the most valuable investment decision I’ve ever made, as the mining sector hits-up again.

Study your own portfolio closely as well. Look at the insider filings of the companies you own. I love CEOs, who refuse to receive fat salaries, and instead want large positions of their own. That tells me they’re committed.

That’s how Keith Neumeyer does business, and you should expect nothing less from the management teams of your own holdings.

Don’t forget, for a second that being a shareholder means you are a partial owner of the company, and you better be very pleased with management, otherwise consider taking action.

Small-cap investing is demanding as it is. Stick with the best.