HIT BELOW THE BELT: USD Dumps – Gold COMES BACK!

HIT BELOW THE BELT: USD Dumps – Gold COMES BACK!

This has been an incredible year to be an investor. We’re up, across all sectors. Since December’s -19.2% drop, September 2018’s bottom in gold, and December’s bottom in Bitcoin, it’s been an OCEAN OF GREEN!

Gold and silver are up double-digits, both over 20%. Bitcoin is the BEST-PERFORMING asset of the year. The S&P 500 is up over 30%. Our Dividend Aristocrats have outperformed the index. Out of our 4 MUST-OWN stocks – three are up over 30%, with one of them up 75% this year.

On top of that, our December 2018 REBOUND PLAYS have been WILDLY PROFITABLE!

I don’t know when the next major downturn will occur, but I’ve already prepared a shopping list of 4 companies to bid on once that happens, and will publish it on a timely basis. The whole strategy behind it is to find companies that are getting punished, due to the general pushback, but are otherwise ready to rally big.

One of the major phenomena that America is undergoing is the longevity of the average person’s life. In the past, the younger generation had opportunities abound, when leaving college and starting a life. Today, careers begin to pick up steam and soar only when people reach their late 30s or early 40s.

In fact, the average recipient of an inheritance is 51 years of age!

Over 25% of people receive inheritance money in their 60s, which is a major CONTRIBUTOR to the increasing wealth gap. The older generations (50 years and above) own assets and have the highest salaries. Because of the end of traditional retirement plans, they also HOARD cash, not spending it. Consequently, trillions of dollars are parked in stocks and bonds, but are not trickling to Millennials, who remain mostly without assets, savings or high-paying jobs.

Life begins at 50 in the U.S. in the age of globalism, since most high-paying jobs are at the executive level – and that requires decades of experience to reach.

Take a look at this major trend: 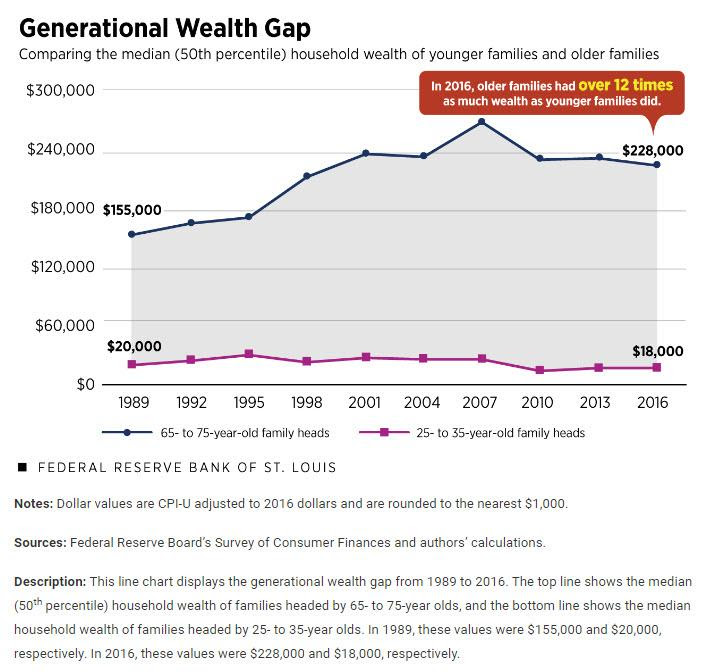 This is the reason that Millennials are postponing family unit creation and are not buying homes. The opportunities that await them in the U.S. have been stripped, due to globalization and technology.

America’s government FAILED miserably at keeping the national interest on the table and allowed U.S.-based corporations to pursue capitalistic agendas, without regard to the well-being of American citizens.

In other words, corporations were allowed to outsource and exploit the world as their oyster, which has had a tremendous positive effect on the dominance of American enterprise on the global economy. But this has created a casualty: the worker, who isn’t at the top of his or her enterprise and doesn’t make decisions.

The difference in salary and compensation between employees doing the actual work, and those making the key decisions, has never been WIDER.

For a decade, the dollar has drawn investors to it, because it has been a safe haven compared with alternative fiat currencies. It is now starting to lose momentum, especially as the trade deal is getting closer by the day.

There are still some tough negotiations going on; each side is showing the other it won’t blink first, but it is looking more and more like a Phase 1 is at hand.

In order to succeed in today’s America, you have to THINK, not just do. Many of the top-paying professions include the need to lead others, make key decisions and be technologically savvy.

There is no easy money or a quick path; you have to ROLL UP your sleeves.

I’ve shared twelve principles that I use and will be detailing the 13th and 14th right now.

Success requires having a backbone and the ability to look into the reason that something didn’t work. Everyone, no matter who you are, SUFFERS blows and we must be able to study them, in order to learn and proceed.

I’ve made major errors in judgement in my career, but still live the life of my dreams at age 35. I worked 10 hours a day, 7 days a week for 60 long months, until I saw the light at the end of the tunnel – an opportunity to break through!

Don’t just drift. Be focused, so that you can improve. This is not a game and I believe in the power of personal change and have seen it work miracles, first hand.

Be easy with yourself on this strange rock we call Planet Earth; no one has ever been perfect, but the ones that succeed do so under the concept of climbing an endless ladder.

I’ve been fortunate to let go of the social need to be accepted and have mostly lived in a way that others would criticize, but RESULTS tell my story.

When I decided to bungee jump, or scuba dive in shark-infested waters without a cage, my parents were livid. When I decided to go straight from high school to business, all my friends raised an eyebrow. When my wife and I decided to take our baby daughter on an 18-month-long tour of 20 countries, everyone questioned me.

Imagination and vision of how to CONDUCT YOURSELF in a way that benefits your own needs, while ELEVATING others forces you to make tough choices, but they are the right ones.

You need to take your ideas so far into the ocean that you can’t see the shore anymore and why SHOULDN’T you!

Live your best life – get inspired to break all the mental shackles that 97% of human beings back.