Silver has gone up 6.4% this week alone. On the 17th, the ETF saw its largest inflow since early 2013. This is definitely beginning to resemble a bull market, but just in case it ends up being only a sharp rally, lasting weeks or months instead of years, we’re cashing in like NEVER BEFORE.

In 2018, twenty-two central banks, (mostly from the ex-USSR block, India, and China) bought the largest amount of gold since 1967, which was the SAME year that the London Gold Pool collapsed.

There’s huge momentum for the metals and since Thursday morning, when our last letter was published, our top two royalty stocks are up an additional 3%, closing at all-time highs. Meanwhile, closed at a fresh 52-week high, up 14.4% since I first alerted ON IT.

Still, it is NOWHERE near its cycle highs and that can be said of the majority of mining equities.

For most people, a bear market in the dollar is worse than a bull market. For Americans, when the dollar strengthens, consumers gain purchasing power over other countries. The U.S. economy imports 70% of its products and services, thereby elevating the quality of life for the majority. Because the wealthiest 10% of households own 84% of all stocks, the remaining 90% collectively own the other 16%.

In other words, celebrating the bull market we’ve been enjoying for 10 years on Trump’s Twitter feed or on the mainstream media is like standing outside a billionaire’s mansion, watching on TV how his rich friends are having a ball; worse, the attendance fee continues to go higher, so the opportunity for spectators to enter the grounds gets diminished with each firework that gets shot in the air.

By owning precious metals, you’re putting yourself in the winning camp for the next few years, since the majority will suffer from erosion to their savings power. 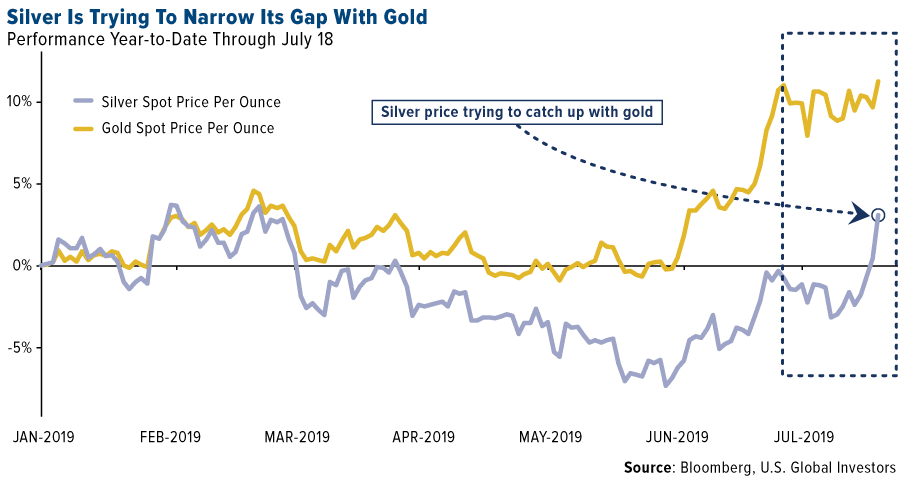 As I said before, silver joins gold and surpasses it only in the later stages of bull markets, so this catch-up is indicative that we could be in the early stages of a fundamentally-driven period of higher metal prices.

Washington is definitely still the BEST of all governments when it comes to the yield it is paying lenders. Compared with Europe, where now HALF of government bonds come with negative yield, the U.S. looks like money paradise.

That’s the reason the dollar is holding up; there’s demand for it, but the FED is almost guaranteed to start chopping rates at the end of the month.

The 2nd reason that precious metals are beginning to draw a bid is because investors are realizing that central banks are out of ammunition, save for the FED. In other words, they understand that between now and a year or two from today, governments will have to take charge with fiscal policies, replacing the dominance of monetary policies.

We’ve seen what occurs with classic monetary policy: lowering and suppressing rates, and buying financial assets drive up prices, but help only the wealthiest; while fiscal policies prioritize deregulation, tax reform, government incentives, and infrastructure plans that have broad impact and reach most people’s lives. In fact, we just saw Congress pass a new law of $15.00/hour minimum wage by 2025.

What investors understand is that (1) with reduced central bank stimulus going forward, stocks will be less attractive, then (2) governments will have to DEVALUE currencies, (3) tax the rich, and (4) run enormous deficits. 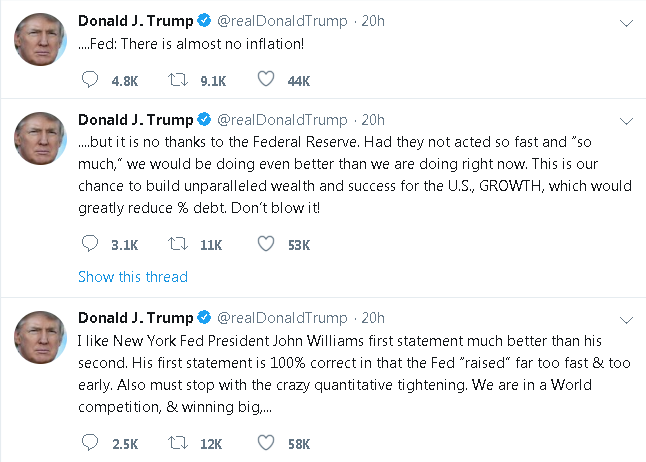 President Trump is the manifestation of this shift in America. Obama didn’t mention the FED or criticize it, but only looked to maintain unity by praising it, while it was clearly working for the RICH at the expense of the MAJORITY. Conversely, this administration is making its complaints heard.

In order to fund healthcare liabilities and social security, you must combine issuing debt with lowering the real value of currency – a wealth tax (inflation).

Washington cannot cut back on entitlements – not because it doesn’t want to upset the citizenry, but because over half of recipients are dependent upon it.

When it was first introduced, the government explained that it was merely a bit of extra income, not to be confused with working your ass off and saving in order to be self-sufficient in retirement. Unfortunately, Americans don’t save.

Inflation isn’t dead. Like a great forest fire, which to the naked eye looks like a disaster, it actually paves the way for life to continue – so the decade of 2010-2019 made it possible for the coming one to prove to people that you CAN’T BORROW YOUR WAY TO PROSPERITY.

Inflation will resume, not in the traditional sense, but by direct interventions by the authorities. Own gold. Own silver. Be ready to dangle some big profits in front of non-believers.

This work is based on SEC filings, current events, interviews, corporate press releases and what we’ve learned as financial journalists. It may contain errors and you shouldn’t make any investment decision based solely on what you read here. It’s your money and your responsibility. We have not been paid for this coverage by Sprott Inc. and did not contact the company for prior review since it is unpaid coverage. The information herein is not intended to be personal legal or investment advice and may not be appropriate or applicable for all readers. If personal advice is needed, the services of a qualified legal, investment or tax professional should be sought.