In the TRENCHES: War BEGINS!

In the TRENCHES: War BEGINS!

The stakes are high right now. It’s one of those “Brexit” moments again or a “fiscal cliff” scare, which downgraded the U.S. credit rating – it is, in no doubt, the most important juncture of this decade.

As we all know, presidents or prime ministers are not always in control of nations.Heck, there’s even a term for that: “puppet regime.”

In the U.S., whether you voted Democrat or Republican for the past 40 years, you’ve received an equal dose of elite globalism, regardless of who’s in power.

Wars in the Middle East, Central America, and Africa have been a recipe for an ever-growing military presence while running a giant printing press to pay for all of it and sticking the bill on foreign creditors and U.S. taxpayers.

In similar fashion to Brazil’s economy, the elite are super rich, control the government, and split the profits among themselves while the majority are being kept at a distance from the wealth pool, fighting over the crumbs and never getting close to the source of money.

President Trump was elected to rattle the cage, and he hasn’t failed to take advantage of his political capital. 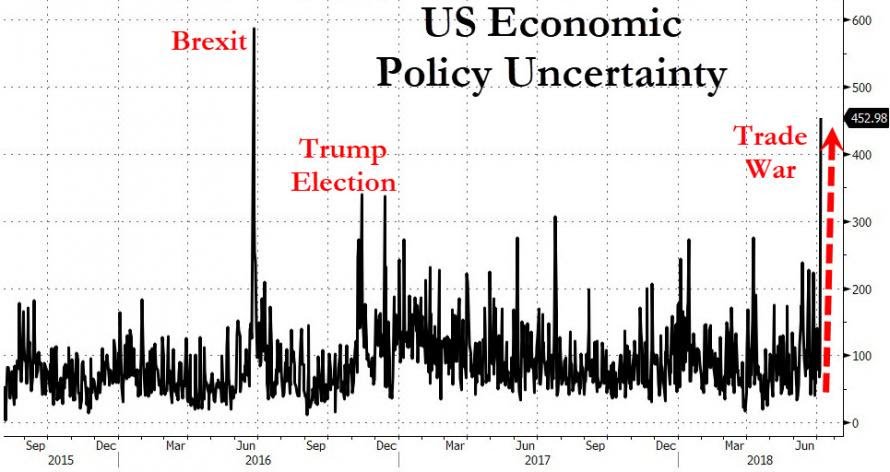 This comes at a price, though.

Policy changes could be good or bad, but the surprise factor is also of importance.

Right now, investors are truly panicking because they do not know what the administration will do next, so they do what human nature dictates. In times of indecision, people do not act, so we’re witnessing enormous cash positions and very few big bets on anything.

It’s all at a standstill.

War with China — economic, political, or otherwise — is a Pandora’s Box, and we’re about to open it up. Only then will we know what the future holds.

The U.S. is like an unhappy wife who expresses her feelings, but the husband may be due for divorce or reconciling the marriage and opening a new chapter in the relationship, bringing more love and courtship than ever before. It can go either way.

Essentially, what the U.S. is initiating is a renegotiating of global terms, and Americans should be thrilled about one thing for sure: their president is the aggressor, not the reactor.

Whatever happens next, at least we know that America’s political leadership is making moves, not responding to others’.

In 2001, Bush responded and a war began. It is said that many of the 9/11 perpetrators were known to the agencies, like the FBI or the CIA, and I’ve seen plenty of evidence, facts, and hard data to support many theories and probable scenarios that completely dismiss the government’s version of events that day in the Twin Towers, Pentagon, and woods, where no plane remains were found. 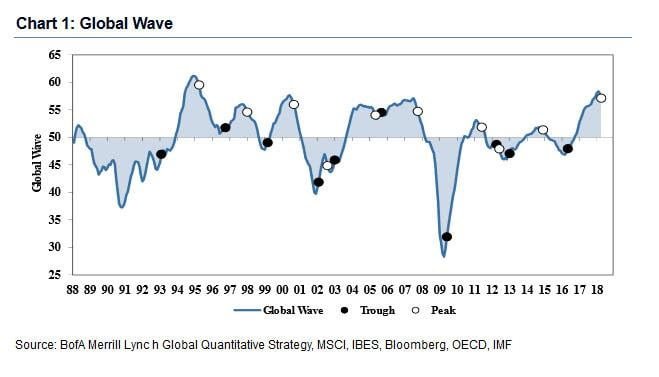 As you can see, the Global Wave indicator, which is Bank of America’s proprietary index, peaks in times of economic activity overload, but it doesn’t forecast recessions. Instead, it generates a reliable read for “breathers,” which Wealth Research Group has mentioned a number of times this year.

Remember, we highlighted that gold stocks need a miracle to rally, and in 2016, when the markets took the previous breather, we saw a raging rally that provided us with 12 separate 100% winners in 8 months. Out of them, 6 gained over 200% and 3 went as high as 450%. 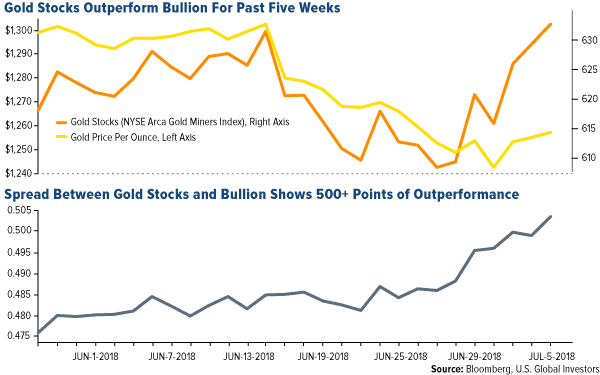 One thing we are certain of is that gold equities are outperforming the spot price, which is a prerequisite for a major rally.

Then, factor in that the USD has been on a tear and is overbought, and our miracle might be at hand.

In any case, the one event that had the most dramatic impact on our portfolio is cannabis legalization.

We need yet another miracle, but the winds of federal legalization are certainly blowing hard.

War stirs the pot, and that always creates new winners and fresh losers. Be ready to make moves as the political landscape clears. The Global Wave indicator usually predicts what are called “relief rallies,” and Wealth Research Group sees much more upside before recession hits.