Snap Out of It

When I think about Warren Buffett’s annual reminder to his shareholders and to any of his listeners to never bet against America, I often read comments that Buffett is naïve and out of touch and that he doesn’t understand where the puck is headed, but the more I dig into it, the more I realize he’s right.

There is no other country so uniquely positioned to be the dominant economy of the world. The U.S. can turn on the spigots at any time, allow for much more immigration of brainpower and a promising, educated population, and grow much faster and be even more influential and powerful than it currently is.

So, when I see Klaus Schwab and the World Economic Forum praising China and attempting to bypass American sovereignty to bring about more of a global framework, I immediately understand the outrage of patriots in America, who knew that what this country has in place is the greatest system of entrepreneurship anywhere in the world.

Wherever America’s government followed centralized and authoritarian policies, it only failed and set the country back.

Nothing could be more evident on this matter than the creation of a central bank. When I see these academics sit in their conference seats discussing how to engineer society, I am both disgusted by the sheer smugness and the height of arrogance demonstrated when they think that they have the slightest idea of what the masses are feeling and what prompts them into action.

In 2009, when these so-called experts on economic behavior and human conduct wanted to “help” Main Street bounce back from the sub-prime meltdown, they came up with the idea of the trickle effect. You may think that Bernanke did this on purpose, bailing out the banks instead of directly bailing out homeowners, but you’re giving these clowns way too much credit.

The truth is the Federal Reserve works by way of elimination. They look at a problem, come up with a possible explanation for it, and see that their theory is wrong because the data doesn’t fit. Months of uncertainty continue, until they finally get it so wrong that there’s no way back.

This is how their failed trickle effect (which they assumed would help both the banking system and the average person recoup their losses and drain their wounds) backfired on them and created the HAVES/HAVE NOTS system, which led to this current rise in populism.

Klaus Schwab is yet another in a long line of delusional academics, who somehow has risen to the grandeur of “Mount Stupid,” believing that he has the world figured out. 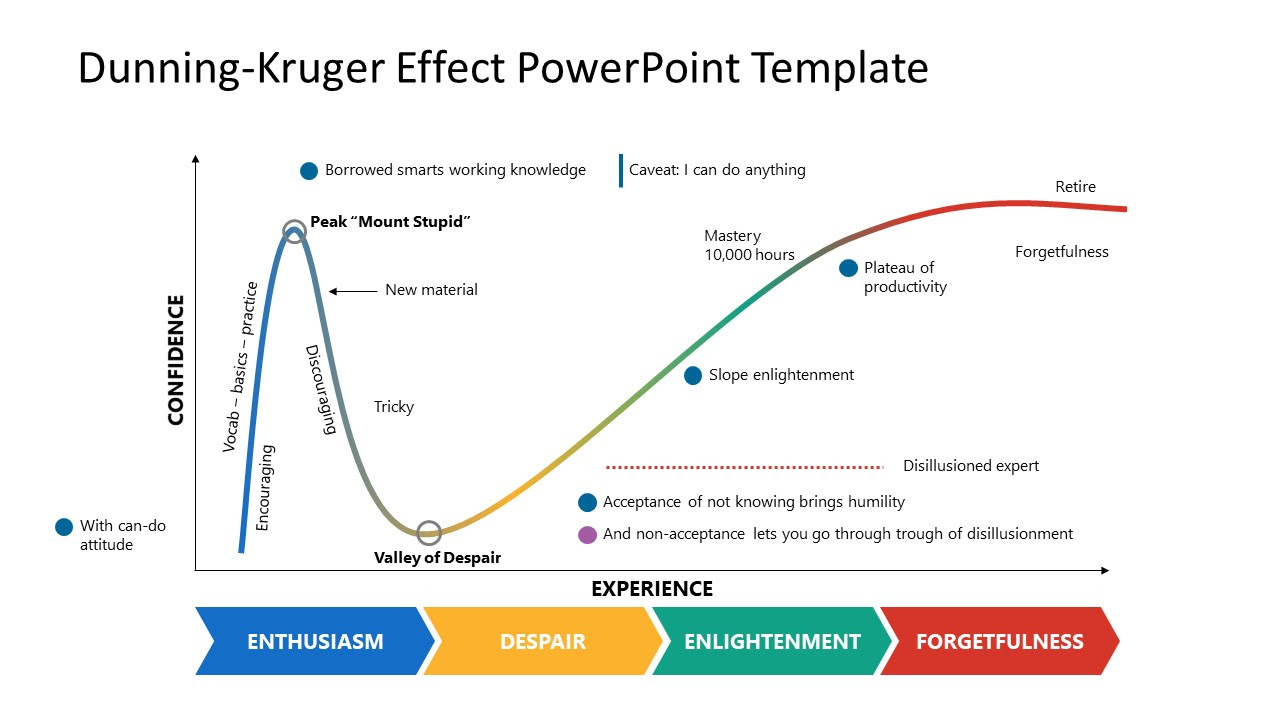 Bernanke saying in February 2007 that America had never had a nationwide real estate crash, so there was no chance of it happening, right before the most acute crisis since the Great Depression, is a classic example of Mount Stupid. Powell’s brushing-off of lumber prices going up 500% as transitory inflation is a recent one.

Klaus Schwab’s praise of China as a role model for growth and prosperity, a country, where citizens are subject to months-long lockdowns and restricted internet access, all in the name of national pride, is the HEIGHT of BLINDNESS.

The smartest and most successful people I know question everything and spend very little time on the peak of Mount Stupid, because they don’t allow themselves to climb it, based on very basic knowledge.

Now, with the FED and Schwab both in valley of despair, they begin to realize the truth: The economy of China is much smaller than previously assumed {whoever took their data at face-value is beyond me} and moving in the wrong direction again, and the U.S. economy is undergoing real and lasting inflationary issues. Finally, we are getting a real grasp on the issues facing the planet.

On Tuesday, I will show you how these refined insights point to a dollar bear market, a gold bull market and a RECESSION in the first half of 2023.

The markets are decoupled from the real-world recession and will rally, just as the blood in the streets appears, ironically.