This Wealth Research Group publication was sent at exactly 09:00 AM Central Time. In the middle of an ancient shallow seabed, filled with the remains of sea creatures that fossilized into the rock and were covered with sand, lies the Middle-East, specifically the Persian Gulf. Underneath the nearly-worthless sand, which forced thousands of nomad tribes to live in miserable conditions for centuries, oil was struck in commercial quantities and untold riches were formed. While it is morning in North America, in Abu Dhabi, the final Formula 1 of the season is just wrapping up (5 PM Israel Time).

There are two drivers fighting tooth and nail for the title of world champion; they are tied, gaining 369.5 points each in the season’s first 21 races, a gridlock that has not happened in ages.

As you’re reading this, a new world champion might already be crowned, and it is either Lewis Hamilton’s 8th championship, surpassing Michael Schumacher’s seven titles and making him the greatest victor in the sport’s history, or it is Max Verstappen’s first one, 24 years after he came out of the womb and was told by his racing-legend father that he must do what his father couldn’t and win an F1 world championship.

Next year I plan to attend my first race in person, and the one I’m looking to spectate is the Monaco Grand Prix, the most famous race in the world.

I toured Monaco in the summer of 2019 for two days. The world’s 2nd smallest sovereign nation, sized only 2.2 square kilometers, is home to 39,000, of which only 13,000 are actually natives; the rest go there throughout their lives for practical reasons.

The country is smaller than Central Park, but when the House of Grimaldi negotiated the 1861 Treaty with France, giving it the lands in the surrounding hills and rocks that were used for citrus farming, it pivoted its focus to gambling and legalizing casinos, while its neighbors restricted that pastime.

The Casino of Monte Carlo brought so many of Europe’s wealthiest tourists to the heart of Monaco that the revenues allowed the Grimaldi royals to lower taxes to 0%. As news broke, Europe’s elites flocked there with their fortunes, built luxury hotels, docked their yachts in the harbor and constructed palaces and lavish villas.

Though Monaco’s racetrack is made up of its streets and would not pass current FIA regulations, it is the one that everyone wants to win, because of the glamour and the celebrities in attendance, who often watch the race from their mega-yachts docked in the harbor.

If you’re reading this, while today’s race is underway, know that Verstappen’s and Hamilton’s heart rates are nearing 180 BPM, as they compete in a modern-day gladiatorial battle.

For hundreds of millions of people – and I would even wager billions – their hearts race not when they see F1 races, but when they see inflation at 40-year highs, and they’re perplexed as to how to pay their bills comfortably. 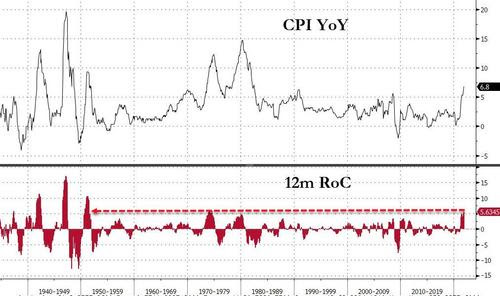 It’s not only the 6.8% year-over-year CPI number (the highest since 1982) that is bothersome; in the red, you can also observe the Rate of Change (RoC), which shows that the last time inflation spiked so much from one year to the next was in the early 1950s!

As you know, as drivers go into corners at 200 KPH and then have to brake hard and enter an opposite corner at 150 KPH, the rates of change in G-force applied to the body is immense, and they must rest after the race and allow it to recover.

A normal person, not accustomed to such rapid and dramatic changes, would get a heart attack.

High inflation, coupled with a staggering rate of change, has caused politicians to address the matter, central bankers to flip their entire thesis, and the markets to completely move from one asset class to another.

As we enter the final straightaway of the last race of the year, figuratively speaking, with the FED’s meeting on the 15th, the fate of silver lies in the balance. On Friday, it was able to bounce from the $21.95/ounce level and close at $22.28, a major win for it.

It is only the first of several battles for the metal, which must attract buyers following the FED’s meeting, or risk entering the brutal bear market, which could send it to $15/ounce.

We will be covering silver’s trading week, as we eye not only its own fate, but that of the mining stocks for 2022 – are we about to be swallowed into the belly of the beast?