No Fairytales or Fantasies

The FED came clean this week; they felt it was time, as we did. For months, even for the entirety of 2021, the FED’s role as an opinion shaper took precedence.

When a son trusts his father, the son will listen to his dad when it comes to topics that matter, even if his gut feeling is that his papa is wrong. For a father, just telling his kid something is true (even when it isn’t) could convince him.

The FED is a central bank that, for the past decade, has taken the stance of following the curve, not of getting ahead of it, so it waited until they literally would look stupid, if they didn’t admit that inflation isn’t transitory anymore.

When my daughter awoke at 06:50 AM yesterday, I wanted to stay in bed for another 30-60 minutes, so I kept telling her that this time technically isn’t considered “morning” and that we should stay in bed until it is officially “morning.” She is five-and-a-half years old, so at 07:20 AM, she finally told me: “Dad, the sun is up, give me a break.”

I couldn’t retain my stance any longer, and that, in a nutshell, is what the FED and the market were playing all year. They took an arbitrary term like “morning” and “massaged” it with different metrics and definitions, in order to signal to the market not to panic about how impactful supply chain constraints, port clogs, worker shortages and commodities surges are to our way of living.

At this point in time, though, they simply figured that it is safe enough to acknowledge their mistake, since the word “inflation” has been used so many times that any fear of it is mostly priced in.

The new debate raging in Wall Street is whether or not this inflation is actually stagflation, and how aggressive the FED will be when it comes to tightening and tapering. 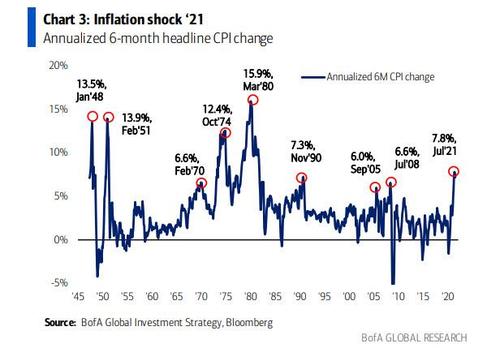 When I’m still tired, but my five-year-old is asking me to get up with her, I have figured out how to make it work with her; we have a routine and, even if I’m still in disbelief that I’m up, the system I have with her makes it sustainable.

This, in effect, is what the FED is trying to ensure.

The FED believes that Covid-19 has changed the jobs market in the U.S. and that labor shortages are going to be with us, as millions of boomers simply took the crisis as a sign to retire early. To top that off, younger millennials, who are single moms and dads, are having trouble going back to work, with their children still not at school in an orderly manner.

Therefore, the FED will focus much more on its mandate to ensure price stability than its other mandate, which is maximum employment.

The FED is going to start tightening and tapering and it can either go well or poorly or a mix of both.

On Tuesday, I will publish the most important portfolio calls, in light of these big changes.

In general, I think that more money will flood into inflation hedges and will leave stay-at-home stocks, which aren’t that important anymore.