I have a friend who was a soldier in one of the world’s most prestigious and ELITE commando units. He was trained to be a warrior and a fighter who could handle SERIOUS mental shocks and still remain poised.

During intensive training, which lasts for 90 days and in which many of the recruits VOLUNTARILY quit the program, the future-commando soldiers deal with many of the most physically and mentally DAMAGING activities known to man. First of all, they sleep 4 hours a night and without being notified of when (so the hour constantly changes). It also happens in 2-hour sessions, with a SURPRISE SIREN alert midway through. You sleep 120 minutes, are woken up to run to the freezing waters for 20 minutes, followed by another 120 minutes of sleep.

They have to enter the sea at night and remain there for hours, just standing. They must crawl on the sand for hours every day, and run for miles, carrying 30-50kg of equipment on their backs. And they have no KNOWLEDGE of what’s coming next.

It could just be that you stood in low-temperature waters for hours on end, including getting checked by a doctor every 15 minutes, to make sure your vitals were strong and that you weren’t getting hypothermia. Then the officer tells that you to run 4 miles, followed by a meal – but after you’ve been eating for only 2 minutes, he changes his mind and sends you to the seas to stand to three more hours, cancelling the meal.

The mental and physical TORTURE is overwhelming for most and this is the reason SO FEW make it through this process.

When I asked my friend what the most difficult part of it was, he told me that it was thinking that the worst was behind you, only to learn YOU AIN’T EVEN CLOSE.

The worst part of a bear market is the bottom. No one knows when it occurs, but only after the fact. 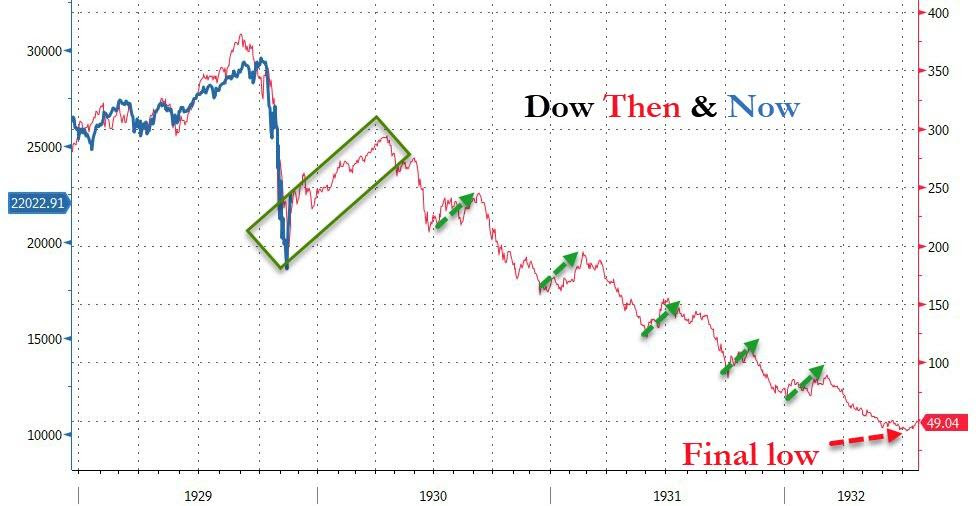 This particular bear market has been following the EXACT trajectory of the 1929-1932 Great Depression up until now. As you can see from the analog, the initial sell-off was BRUTAL and vicious. Next, investors bought the dip and prices rebounded, but those bottom fishers were WAY TOO EARLY to call it.

If we are to experience a repeat of that HORRENDOUS financial reset – one that shaped the lives of tens of millions of people around the world – the Dow Jones Industrial Average would have to fall by an UNBEARABLE 50% from here, on top of what it has already given up.

One of the Federal Reserve’s STONE-CARVED mantras is to never let the Great Depression reappear on American soil.

Generations of central bankers grew up studying the mistakes (as they call them) of that era, which included (in their minds) a LACKLUSTER RESPONSE to the meltdown.

This current board of FED governors is RADICALLY different than the one that oversaw the 1929-1932 PANIC.

What the Federal Reserve has done in the previous two weeks has no historical equivalents. It’s hard to really understand it until you begin to compare it with other monetary rescue plans of the past.

Check out this truly JAW-DROPPING chart: 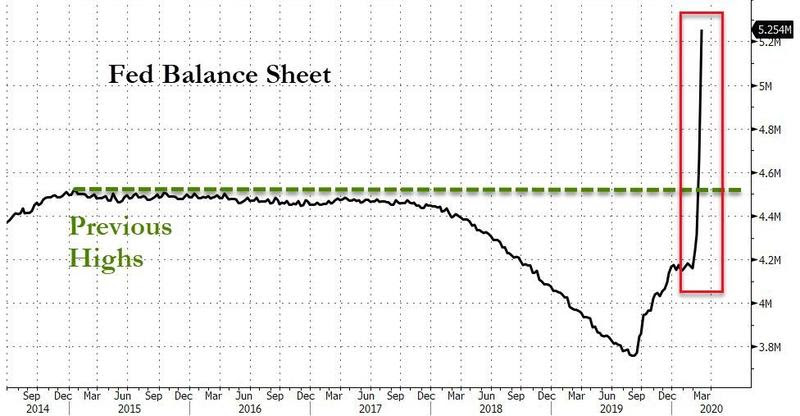 The Federal Reserve’s balance sheet ROSE by $1.3 trillion in 14 DAYS, which is akin to them buying Google and Walmart – the scope of their purchases are MONSTROUS. This sum is equal to 6% of GDP and they are FAR FROM finished.

The Federal Reserve is becoming such a critical investor that it hired Blackrock, the world’s largest asset manager, to help build and manage its portfolio.

We are NATIONALIZING (in point of fact) the U.S. stock market and DIGGING HOLES which will be ugly getting out of later on.

The problem is that the governments have asked over 2 billion people to minimize their existence to the confines of their homes. This is the most concentrated effort of any PLANETARY event the human race has undergone since the dawn of time.

Never have 8 billion souls focused on solving one problem, which makes me OPTIMISTIC that the solutions will come sooner than we think, but we can’t allow emotions to dictate ACTIONS.

We must act in a calculated manner. Just like the commando unit trains its soldiers to be mentally ready for anything, so SHOULD we be psychologically ready for ROUND 2 of the SELL-OFF and not to expect this boxing match to be any shorter than 15 rounds.

The world’s central banks and governments have pledged $7 trillion in liquidity and $5 trillion in fiscal packages. I want to make sure we’re PREPARED, so I’m working on something SPECIAL, which I’ve never done in the past and might never do again in the future. I will provide details during the coming week.

The dollar is the determining factor as to where the global economy is going next. If it resumes its climb, then rounds 2, 3 and 4 will be HELLISH, but if the concentrated effort of the authorities to PUNT the reset by another decade have worked, then REFLATION will make us WINNERS, as we know the playbook for it.

I’m working on a MASTERPLAN for both scenarios and will detail everything SOON.