Fiat currencies are used for international commerce by governments in the same way Bitcoin is used for global trading by whomever. Now, at $20,000, Bitcoin’s market cap has surpassed that of the SDR – the Special Drawing Rights currency, which was issued by the IMF in 1969.

Not any people know this, but the IMF, which is influenced by the U.S. to a large extent, created the SDR 2 years before Nixon took all fiat currencies off the gold standard.

The SDR was designed to replace the Bretton Woods system and usher in a global reserve currency dominated by U.S. dollars – the plan never materialized, but this currency exists today as well.

Of course, their official reasoning for creating them will always be justified as a means of stabilizing exchange rates, but that’s bullshit. In fact, it reminds me of Nixon’s famous TV appearance to reassure the American people that the action of disconnecting gold and the dollar will end volatility and manipulation, when it has done nothing but the opposite.

Nixon’s 1 minute and 19 seconds of pure BS is a constant reminder that high-ranking politicians are working for an agenda that has nothing to do with the good of the public.

The devaluation is beyond belief.

Countries are watching their national currencies and foreign holdings be devalued while private, decentralized currencies are gaining value rapidly.

They’ve already come to grips with the fact that outlawing cryptocurrencies is not an option because people will continue using them regardless. It will only serve to undermine governments and bring about alternative economies and societies.

They must stop the bleeding. The corporations they bailed out — JPMorgan, Wells Fargo, Bank of America, AIG, General Motors, and others — are not “too big to fail” anymore.

Bitcoin is too big to fail, and it doesn’t need taxpayers to fund it like these crybaby CEOs who looked to the government for a bailout like a bum from the street – it’s doing just fine on its own.

Government officials see how this is quickly slipping out of their hands.

Bitcoin futures now bring mainstream America into the mix, along with corporations and foreign investors.

The Eurozone and the U.S. Federal Reserve issue currency that makes its way around the globe.

Remember, 71% of the world’s fiat currency is USD, and 50% of it resides outside the U.S. borders.

They’re stuck with what they’ve got. Smaller nations, those with nothing to lose or that have the will to suffer through the birth pains of a new currency system, will create a blockchain for government-issued cryptocurrencies. I expect these to be primarily in 3rd-world countries or 2nd-world countries.

For G20 countries, the bombshell strategy they will deploy (stealthily, of course) is going to be buying Bitcoin as part of their foreign reserves, and possibly altcoins as well.

2018 will be extremely disruptive, and Wealth Research Group expects new cryptocurrencies to hit the scene and offer solutions to governments, which will catapult their market caps from $0 to $1B in no time.

One final note, and it’s a critical one.

The cryptocurrencies have all been able to flourish while the USD was in a bull market. Check this chart out: 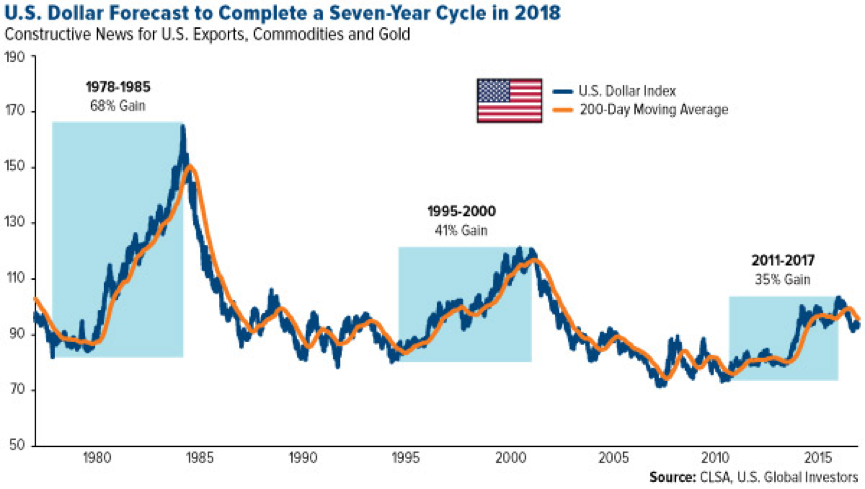 Now that the dollar is noticeably breaking down after its normal 7-year bull market cycle, gold’s price, along with the industrial metals (silver, zinc, copper) and the energy/strategic sector (uranium, oil, lithium, cobalt) will have a clear runway ahead of them, especially if tax cuts are approved and the infrastructure plan commences.

If gold and cryptocurrencies rally together, central bankers and politicians will be like whipped dogs. I personally can’t wait to see how they try to weasel out this time around.