Nothing Even Comes Close: No. 1 Canadian Cannabis Stock

The Most Undervalued Company I’ve Ever Seen, Without Question!

It’s time. The trend is strong, and we’ve got confirmation that the bull market has commenced. We’re first in the door – literally. 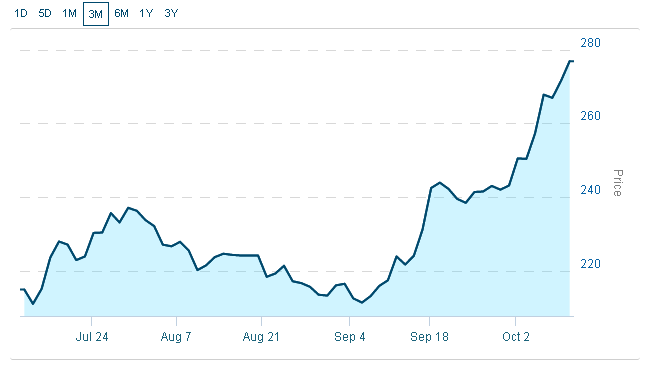 This is the Canada Marijuana Index, and since July, it has started a breakout.

It’s up 35% since then, and the sector is up over 20%, which officially puts us in bull territory.

What I’m about to hand you today is the key to make incredible returns, effective immediately.

Canada's marijuana market could be worth as much as $9 billion once recreational use launches. That’s 22 times the current size – a 2,200% increase o-v-e-r-n-i-g-h-t!

If that’s not enough, Canada will become the ONLY developed nation in the world with the capacity to export cannabis, at a time when 29 other countries are going through the legalization process, including Germany (Europe’s richest country), Australia, and Argentina.

The strongest companies right out of the gate could become tomorrow’s Amazons of the weed industry, and with worldwide acceptance growing exponentially by the minute due to amazing stories like that of Alexis Bortell, the 12-year-old epileptic girl who has been seizure-free for a couple of years after using oils, the validity of the medical benefits are attracting the best scientists in the world.

What we found after looking at 71 cannabis companies in Canada is one cash-rich, fully-funded cultivator, with licenses already permitted, operations in Alberta and Ontario, a gifted management team, and a roadmap to a billion-dollar valuation in 3 years. Its current market cap is CAD$100M.

It is our No. 1 cannabis company, bar none, and it could potentially soar 1,000% from today’s prices in a mere 3 years, conservatively.

I spoke to founder and CEO Dan Kriznic. Along with Trevor Dixon and Brenda Dixon, management has a cumulative 28% ownership of this company.

The shareholder base couldn’t be healthier. Their sole objective is to unlock the value of their cultivation facilities and dominate Canadian cannabis for both medicinal and recreational uses.

Our due diligence of Invictus MD (TSX-V: IMH & OTC: IVITF) began in March when they were listed on the TSX Venture exchange.

That same month, they closed a CAD$16.1M financing and their Alberta facility, 100% owned, received its ACMPR license, one of only 62 in the nation.

They then attracted institutional investors and raised an additional CAD$25M to accelerate the acquisitions model. They are being very aggressive and laser-focused because they want to harvest and sell into the monstrous demand that is about to occur as the floodgates open in a few months.

The reason our timing is immaculate is because they are about to receive their sales approval and begin to start revving the cash profits machine! 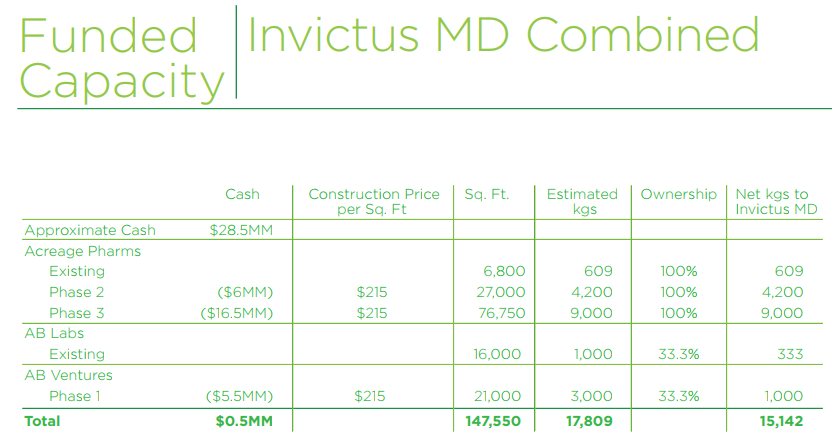 As you can see, the fact that management moved quickly ahead of many of the now-launching competitors has given Invictus MD (TSX-V: IMH & OTC: IVITF) a huge advantage.

They have CAD$27M cash on hand, and their expansion phase is fully funded until 15,000 kg.

Once they hit 15,000 kg, the expansion plan kicks into 6th gear, as Dan Kriznic, who has already built companies worth $750M in his career, puts in motion the strategy to reach 50,000 kg and a billion-dollar market cap, doubling the 2021 milestone. 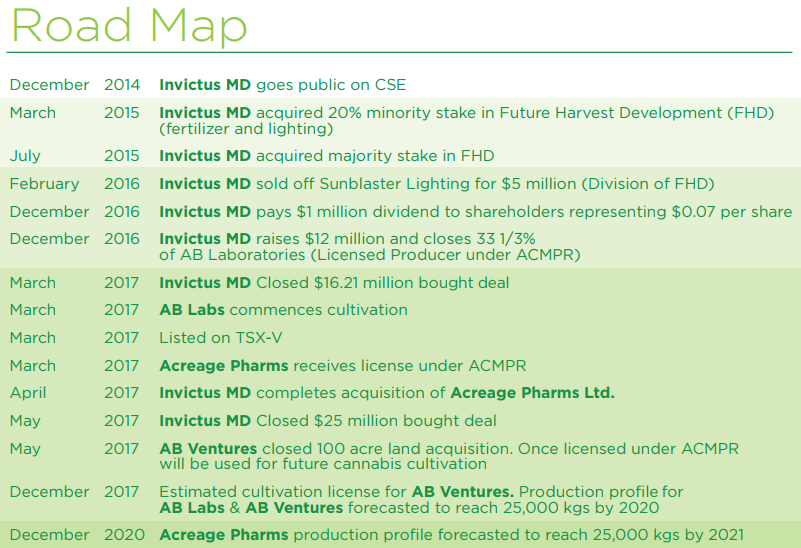 As I see it, we are now getting the opportunity to become shareholders right before the announcement of sales license approval and the expansion phase going into next year's legalization date.

But the full story becomes apparent when you reduce the cash from the balance sheet and look at Enterprise Value.

With a current cap at CAD$100M and CAD$27M at the company’s disposal, the EV is CAD$73M, which means that among its peers, it’s the most undervalued Canadian cannabis stock!

In other words, every institutional investor with deep pockets will notice right away that with the entire universe of cannabis stocks at their disposal, none of them have: 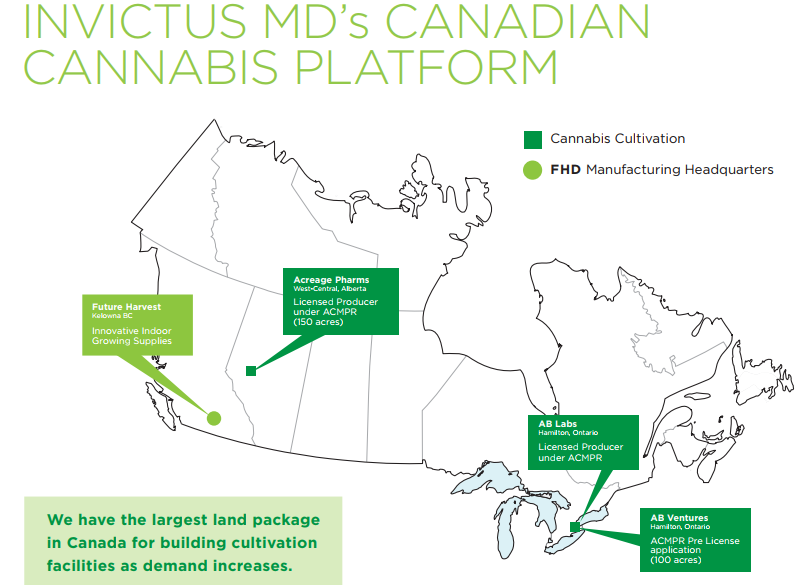 In the U.S., there are already marijuana millionaires who have been alert to special situations and exceptional opportunities to back early-stage companies.

Everyone has ignored Canada, but it is already medicinally legal right now. By this time next year, the country will be fully legalized (including recreational use) and a full-blown shortage in crops could erupt.

The first marijuana ETFs launched recently, and this will add to the attention the media will bring, but for now, Canada’s cannabis market isn’t getting any attention – this is your moment.

The mounting catalysts for Invictus MD (TSX-V: IMH & US: IVITF) to become one of Canada’s leading companies and reach a 10-figure valuation are in place.

Dan Kriznic, the founder, has been responsible for incubating companies in a variety of industries from nominal valuations to over a billion in enterprise value.

He’s a serial business-builder, and after meeting with him face-to-face and speaking with him over the phone for months, it is my opinion that he will be a hundred-millionaire from the legalization boom.

Each decision he has made with regards to adding value to shareholders has been flawless.

Invictus MD is our No. 1 stock suggestion, and it has a clear runway to triple in price, as we see it, in months – not years.

I also want to share with you what management has up their sleeve if operations continue to run like clockwork, as they have up until now. 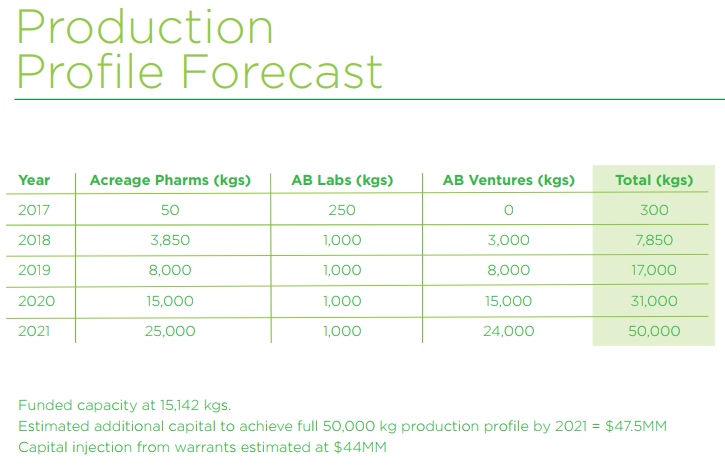 This is a production profile, which completely blew my mind.

Since the management team has championed how to raise funds brilliantly, it even has the potential to reach 50,000 kg in production without DILUTION, using only warrants for cash injection.

Put differently, Invictus could grow from CAD$100M to around CAD$850M-CAD$1B purely by internal growth.

If that happens, it will be the most sought-after business to own in Canada and will be ranked with the world’s most capital-efficient businesses.

What I think is critical to wrap our minds around is the fact that Canada’s medicinal market is only the tip of the iceberg, and in itself, it’s set to exponentially boom.

Once full legalization hits, Invictus MD (TSX-V: IMH & US: IVITF) will attack the recreational sector like no other company. With the caliber of their board and the tight relationships it has formed with government officials and peer businesses, their acquisitions model will disrupt the industry – they have cash on hand and the willingness of institutions to come in at any moment.

This could truly be your best investment ever.

Get updates on Invictus MD and
more Wealth Building Ideas for the new economy.

Legal Notice: This work is based on SEC filings, current events, interviews, corporate press releases and what we've learned as financial journalists. It may contain errors and you shouldn't make any investment decision based solely on what you read here. It's your money and your responsibility. The information herein is not intended to be personal legal or investment advice and may not be appropriate or applicable for all readers. If personal advice is needed, the services of a qualified legal, investment or tax professional should be sought.

Never base any decision off of our advertorials. Wealth Research Group stock profiles are intended to be stock ideas, NOT recommendations. The ideas we present are high risk and you can lose your entire investment, we are not stock pickers, market timers, investment advisers, and you should not base any investment decision off our website, emails, videos, or anything we publish. Please do your own research before investing. It is crucial that you at least look at current SEC filings and read the latest press releases. Information contained in this profile was extracted from current documents filed with the SEC, the company web site and other publicly available sources deemed reliable. Never base any investment decision from information contained in our website or emails or any or our publications. Our report is not intended to be, nor should it be construed as an offer to buy or sell, or a solicitation of an offer to buy or sell securities, or as a recommendation to purchase anything. This publication may provide the addresses or contain hyperlinks to websites; we disclaim any responsibility for the content of any such other websites. Gold Standard Media, owned by the same individuals as Wealth Research Group, has been directly compensated one hundred and fifty thousand dollars by Invictus MD for an online marketing campaign. Never base any decision off of our emails.