President William Howard Taft, who presided over one of the worst banking shocks in U.S. history, was explaining to Woodrow Wilson, the incoming president, who got America its Federal Reserve and made the call to get America involved in WW1, that the job at the White House would isolate him greatly. “This is the loneliest place in the world,” Taft said. Wilson was stunned by the warning, but was even more shocked by the reality of it: “I never dreamed such loneliness and desolation of heart possible.”

This sentence about the White House being the loneliest place in the world has become part of the culture. When Harry Truman, the president who would decide to drop two nuclear bombs on Japan, was asked about the accuracy of that notion, he detailed his daily routine and how far-removed it is from the life of the average person. Being president requires unimaginable personal sacrifice; it’s one thing to win an election, but another to run the USA.

JFK’s famous photo, just a couple of months into his tenure, sitting at the desk, feeling discouraged, is even more affiliated with this quote than the president who coined it (Taft).

It’s an extremely challenging position and, clearly, some do it far better than others.

2022 is shaping up to be one of the worst and most unique years in the history of this republic.

You can already see how the Economic Surprise Index is flirting with multi-cycle lows, which have always led to a breaking point: 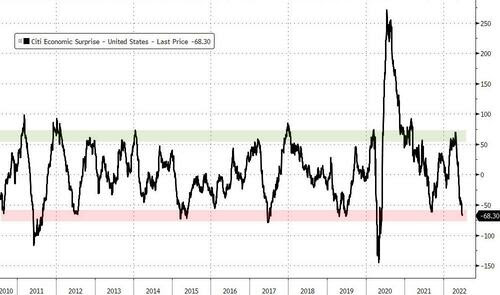 This time around, with this paradigm shift, it is clear that the central banks are not going to pivot; the SOLUTION must come from government, not from the FED, as we’ve entered a fiscal regime, not a monetary one.

What the Federal Reserve is doing is front-loading aggressive policy, in order to provide it with more options down the road, if their policy leads to a sharp decline in business activity in the real economy.

What I’ve yet to see from big governments this year is any DETAILED PLAN that includes solutions!

If you think about it carefully, you’ll agree that no one is trying to fix things; America, a global leader and political king, isn’t lifting a finger to bring global leaders together, to sit at a table and negotiate peace or truce in Europe, a global trajectory for supply chain logistics or for food, energy and inflation obstacles.
I don’t remember any LEADERSHIP VACUUM this dramatic in U.S. history, post-WW2.

Biden is setting the precedent that American diplomacy is taking a much smaller role in shaping the future and that will have huge implications.

Again, the policy of central banks is well-known, widely communicated and telegraphed months in advance. I have no problem with the FED’s conduct in 2022 and I tend to think government incompetence is what’s causing the worst year for the economy in over 100 years! 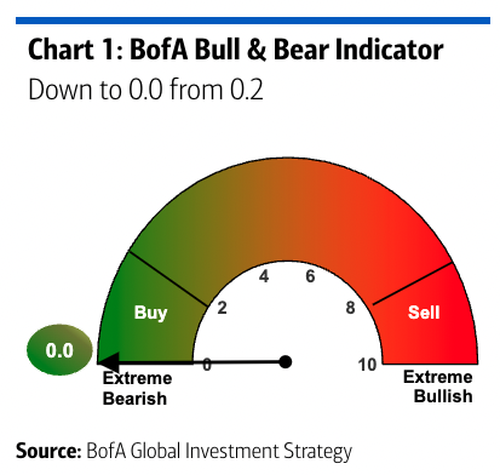 It was in March 2020 that we last saw this bear indicator hitting 0.0, and what I can vividly remember is that it stayed that way for a couple of weeks, and that solutions were being drafted upon the realization that it couldn’t get any worse, without creating terrible dysfunction.

In the first half of the year, ZERO solutions were offered by governments.

We believe that this will change dramatically in the second half of the year. The era of government entering this crisis and truly announcing major policies is at hand, because the mid-term elections are nearing and Biden’s approval rating is dismal and needs repair.