No one is expecting this, absolutely no one. I showed you less than two weeks ago that gold short positions are at 18-yr highs, sentiment is at a 30-yr lows, and COT (Commitment of Traders) is extremely bearish.

However, it goes even deeper than that because this is only the direct manifestation of the hatred towards gold right now – there’s a major indirect signal as well, and it is proving just how absurd the situation truly is. It tells me that we can expect a rare scenario, which only occurred in 2010 and 2011.

Back then, U.S. stocks traded up at the same time as gold.

This was thanks to a set-up, which Wealth Research Group sees repeating itself towards Q4 of 2018 and, with high likelihood, in early 2019 as well. This investment condition is comprised of (1) high inflationary expectations, (2) low-interest rates, and (3) an improving economy, thanks to an “event,” which will release steam and bring about a rally in share prices.

As I’m writing this, “Dumb Money,” which is notorious for piling in and crowding a trade at the worst possible time, is betting at record amounts that interest rates will head higher.

This is only the beginning, though, since these same traders are revealing their cards even further, by betting that long-term rates, portrayed by 10-yr Treasury bonds, will rise slower than short-term bonds, the 2-yr Treasury bonds, thus triggering a recession.

In other words, “dumb money” is bearish, and Wealth Research Group believes this is shortsighted and missing the point. 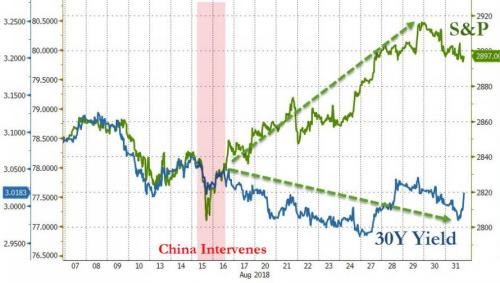 In August, their bet has gone against them, as you can see, while our bet on stocks going higher has generated the best month for the NASDAQ since the year 2000.

Bull markets don’t end with the “crowd” being bearish. It ends when “Smart Money” sees the market has gone too high, too fast, without real fundamentals, which usually leads to some “Black Swan” event, such as Enron’s scandal, or a “Lehman Moment,” and mass psychology changes for some years, becoming negative on stock market performance.

We’re not there yet. In fact, it’s the complete opposite of it. We’re about to have a big rally, and I see mom and pop investors joining the frenzy this time.

I believe President Trump is winning a giant chess match, which he has maneuvered beautifully thus far. No one has confirmed this strategy to be the official one, and no one ever will because if word gets out that what I’m about to reveal is a deliberate plan, it loses its efficiency.

President Trump has created the façade that he is out to wage wars with allies and intensify ones with enemies.

Markets and economies, less robust and stable than the U.S., are already feeling the burn, birthed by this uncertainty. Emerging markets are in the shitter right now, cheaper than ever before.

Traders and investors are betting on a recession, lower commodity prices, a bear market, yield curve inversion, and civil unrest.

Now is Trump’s time to turn the momentum on a dime and prove his worth. Last week’s deal with Mexico is just the beginning – the starting gun. One by one, before the mid-term elections, you’ll see more and more “positive” deals, reassuring ones, being signed and inked.

Trump is setting the stage for a market rally, which will result in getting the Republicans elected to Congress, and putting the economy on steroids.

This is when Wealth Research Group believes banks will show more flexibility by lending to Main Street businesses, to first-time homebuyers, and to building/construction companies. The real estate market will lead the way, and stock markets will rally, as Americans and foreigners breathe a sigh of relief and believe in the full recovery of the global markets.

That will signal the end, but between now and then, we can capitalize on huge opportunities:

Gold will rally because interest rates are headed down, while inflation is going up.

Cannabis will rally because it’s the most exciting industry in the world.

Millennials’-style health companies will go parabolic, as spending by this deemed “impoverished” generation will prove to be a fallacy.

Look out for a major alert tomorrow at 03:00 PM CST – I’m scheduled to speak with the CEO/founder of a company, which I’ve vetted over the weekend, for the fourth time today.