Elvis Has Left the Building

I want to start by showing you something that shows that markets are like boomerangs, and if you mean leverage in the good days, you’ll get a nice email notification from your broker in capitulation moments:

In 2011, Hollywood produced a movie called Margin Call about the Great Financial Crisis, which explains that left spike, but this current one can only be explained by one thing: Retail money is getting squeezed, until there’s no more juice to squeeze out.

They’re getting a notification from their brokers to either fund their accounts or they’ll be forced to sell positions in their portfolios.

April was a margin call squeeze, the exact opposite of a short squeeze; it’s when the bulls are forced to liquidate, not the bears.

The NASDAQ 100’s freefall in the month of March, down by 13%, which is nothing short of extraordinary, is rivaled only by the Lehman Brothers bankruptcy weekend in 2008.

APRIL WAS HORRIBLE, ON AN HISTORICAL LEVEL

In all of history, there have only been eleven worse months.

If you want to research for a worse January-through-April performance for the S&P 500, you’d have to ask Warren Buffett about that time, when a European political leader wanted to expand his territory at the expense of human lives, including his own soldiers, enemy combatants and any civilian resistance {and I’m not talking about Vladimir Putin!}. 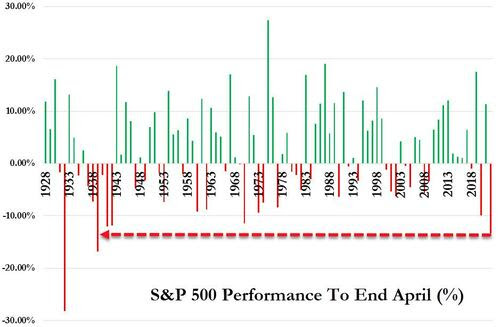 In 1939, the world began its darkest 6-year period in modern history.

Are we entering an economic and military crisis, on a global scale?

Whether we are or not, check out what happens when January-April is this bearish:

The retail investors got the tax bill on April 15th, next they received margin calls and were forced to sell, and I don’t see many of them returning for several years to come.

This, in my opinion, should serve as an indicator of just how bearish investors are, but I also want to show you three other key criteria:

Most don’t think about what I’m about to show you, but this might be even more important to understanding the predicament we’re in than the stock market is.

The global bonds market is far larger than the global equities markets are. If I said that we have to go back to Hitler’s invasion of Poland to witness a worse stock market, when Warren Buffett was just a small child, then you have to go back to Pre-Warren times, in order to see even worse bond carnage.

This is a once-in-a-hundred-years event: 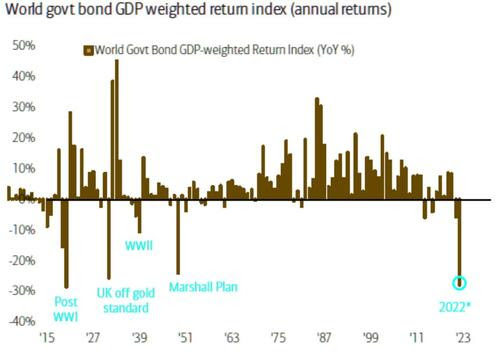 So, now you see why I will never forget April 2022, but with that said, it all pales in comparison to what will happen in just 28 hours from now, when the FED’s FOMC meeting concludes with a statement and a Q&A session, which I expect to be insanely volatile.