How Did we Get Here?

Thursday, February 24th 2022, just over three weeks after my twin boys were conceived and took their first breathe of air, the world changed forever. On that day, Russia proved that in the 21st century, it is still possible for a country to invade its neighbor.

Roughly 200,000 soldiers invaded Ukraine and shocked the globalized economy and our connected society, where media and news travel seamlessly.

Onlookers quickly understood that whatever response the U.S. will have to this invasion will reflect on another matter… that of an island in the Pacific Ocean called Taiwan.

The Ukraine and Taiwan have some similarities, being two small, de-facto independent nations, directly next to a Big Brother country (Russia and China, respectively), ethnically related, but culturally apart from their smaller neighboring country (Ukraine and Taiwan).

The big country, in both cases, is under the impression that the smaller is a renegade, a rebellious rouge country, which should come back under the full control of the mother goose.

In 1895, The Japanese conquered the island of Taiwan and held it until the end of WW2, when it was returned to the Chinese, which were in the midst of an internal, domestic war between the communists and the nationalists.

Even though we can see similarities between the cases of Taiwan and Ukraine, from a military perspective, these are very different situations.

While Russia and the Ukraine share a land border that stretches thousands of kilometers, a military invasion of Taiwan would entail the largest-ever amphibious assault, with 100K’s of troops, warships, fighter jets and military personnel, working in tandem to conquer Taiwan.

On Thursday, I will explain why Taiwan is the epicenter of the cold war between the U.S. and China, but for now, know that Biden’s remarks {or Xi’s remarks and in the future, any other world leader’s remarks} over the brewing conflict of Taiwan, is sure to be volatile for global equity markets.

Now, let’s concentrate on the equity markets and where they are, at this particular point: 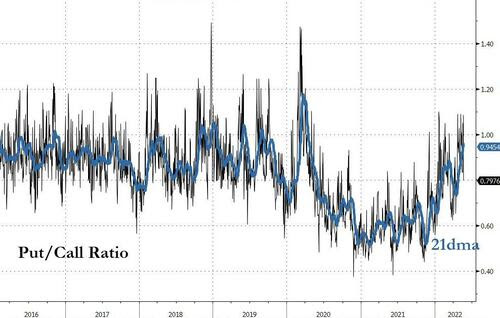 The markets seem to believe that the S&P 500’s FED PUT, which is the imagined level, where the central bank will stop talking so aggressively about how it wants to stop inflation, by raising rates, and tone back the rhetoric, so that investors could start buying back in, is at 3,500 points.

To me, this means that we’re probably not going to reach those levels, because traders will want to get ahead of that…

I also think that another important dynamic is at play here, which is that, as you can see above, it’s now popular to be bearish.

Bulls and optimists are scorned and laughed at.

When any analyst says he doesn’t foresee a hard landing or a recession, he’s dubbed as naïve or blind and CNBC is bringing on commentators, saying that stocks are “Un-investible,” which tells you all you need to know about just how much drama is out there.

Gold will continue to outperform in this environment!