In 2008, years of criminal-like lending practices by the world’s largest banks – which also act as leveraged investment banks – came to a screeching halt. In THIS documentary, all of the key figures appear and talk about their personal experiences, as they struggled to get a grip on the situation.

In the aftermath of 2008, there were Occupy Wall Street protests and the formation of the Tea Party movement.

As has happened in the history of this country on a number of different occasions, division persisted and even intensified. There are, literally, millions of people (I estimate over 20 million in the U.S. alone) that have ZERO trust in government, central banking, or any of the authorities; they despise them.

Monetary policy failed to extend credit to Main Street for the past 10 years and has only served to fuel share buybacks, an inflated stock market, and inflated real estate valuations. As a result, that distrust has grown into disgust, infiltrating large sections of the population who were, before 2008, extremely proud to be Americans.

Now, they question the motives of elected officials, learning that there’s a Deep State working to create a one-world government. Yet the recovery is peaking, so as lousy as things are, this is as good as it gets. 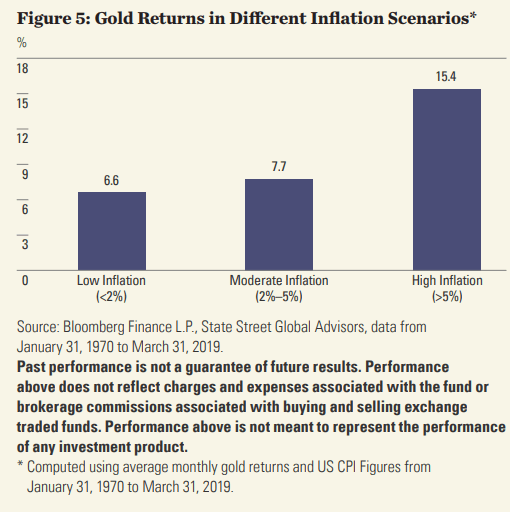 I love this chart. It shows that since the “GOLD IPO” began in August 1971 – when the worst economic decision in history occurred with the Nixon sham – gold has been a MUST for investors.

In the 1970s, gold soared. In the 2000s, it soared once more. Today, it’s three years into a moderate bull market; the potential for it is enormous, going forward.

Right now I am more concerned with the size of my gold position than I am with its gains. I am making sure it is as large as I want it to be.

In 2008, Hank Paulson told Jamie Dimon of JP Morgan Chase, the one bank with no liquidity issues and that didn’t want to touch TARP money, to take the money anyway. Jamie was rightfully fearful that the street would assume the bank was in distress, if they accepted aid. But, Hank told him that he will take his first born if Jamie didn’t accept it. The idea was for all the banks to take some, so that trust in the banking system would be restored.

The Buffett-proposed TARP actually made Washington about $50B in interest payments and was fully repaid, but the introduction of these relationships between banks and governments (and then AIG, General Motors, and the government) is a slippery slope.

The type of fear-mongering used to get the bill approved by Congress included Hank Paulson telling Nancy Pelosi (who wanted to schedule a meeting the next day) that “tomorrow morning will be too late.”

Any system in which tomorrow is “too late” is rotten and should be immediately changed – that’s my take on it.

As you can see, the Asian and Chinese demand for gold jewelry is going to put immense pressure on the supply of the metal, just as its monetary use is back on full display.

You will see political battles in this country that will end in trauma.

Too many people want to see bankers hung, like in medieval Europe. Could you imagine how this anger would intensify at 6% or 7% unemployment rates?

This is the reason Wealth Research Group is certain that the government will introduce guaranteed salaries and public works in the next downturn.

Gold is essential for the times ahead. If they resemble the 1970s, gold mining stocks will trade like Bitcoin in 2017!