This is the Showdown

Our best friends from the United States have just left for the airport. They spent the past six days in Israel, and on Tuesday, we took a big van and headed South towards the lowest place on Earth, the Dead Sea.

Driving towards it, we went into the West Bank, an area that is shared by both Israeli and Palestinian settlements, before finally reaching sea level on the winding desert road.

The interstate leading to Jericho, the oldest city on Earth, at the northern tip of the Dead Sea, is filled with signs telling you your altitude below sea level. Right next to one of those, we stopped and rode camels. The kids were beside themselves, because those camels need to sit down on the pavement and stand up after you climb them and they’re tall!

From there, we went to Masada. When the Roman Empire ruled Judea (before it was renamed Palestine or Israel), Herod the Great wanted to construct a winter palace for himself, and the Judean desert enjoys mild temperatures in December.

Sitting at the top of a rock, Masada was his getaway crib away from the freezing winds of the mountains of Jerusalem, but is secluded, dry and remote: 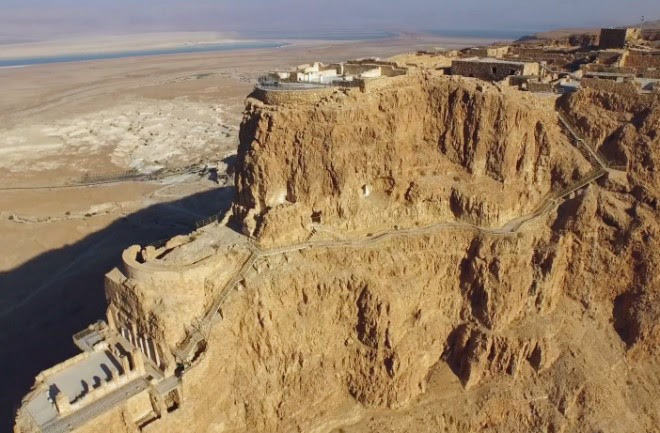 Against all odds, the Jews revolted and rebelled against Roman rule. In the year 66, a group of Jewish rebels conquered Masada from a Roman military legion and stood their ground.

All told, approximately 960 Jewish rebels were under siege by a massive army force, made up of 6,000 professional Roman soldiers.

Each of these soldiers was an expert at weaponry, the art of war, construction of war machines and water logistics. Klaus Schwab and his army of elites are stronger than the Romans, but they are fighting many, who have seen their plot.

As we made our way up to Masada on the state-of-the-art cable car that takes tourists up to the archeological fort and 2001 UNESCO World Heritage site, the sheer effort of building the water canals and transporting the building materials and the rest of it to this hilltop, becomes overwhelmingly illogical.

The whole thing is a giant miracle.

One evening, Eleazar Ben Yair, the rebellion ring leader, seeing how their chances of survival were running slim and facing the notion that the Romans would be able to climb the mountain in the AM, made a speech.

He told his fellow rebels that tomorrow morning, the Romans would beat them and squash the revolt, so the prospects facing them were torture, slavery, rape and death.

He said that he’d rather die on his own terms, a free man, than become a lifelong puppet at the mercy of a master.

His speech reverberated through his fellow rebels, and when the Romans breached the wall and entered the compound, they found everyone dead. These Jewish warriors would not live as slaves and watch their children starve and beaten by the enemy.

These mass suicides remain a controversial topic in Israel and the Jewish world, since the question remains as to whether they should have fought to the end, instead of doing what they did.

Without getting into their heads, my most important conclusion is that extreme situations make people’s mental and cognitive skills run wild.

The global economy is entering such a time, when lose-lose scenarios will emerge, with no real upside.

Politicians, central bankers, officials, corporations, businesses, households and, ultimately, individuals, will be forced to make touch decisions in the 2023 recession, and I want to inspire you not to give up, not to quit and to PERSEVERE!