MASSIVE WEALTH: Sit Down For This ONE!

MASSIVE WEALTH: Sit Down For This ONE!

In 2017, Wealth Research Group made historical gains with our cryptocurrency alerts. 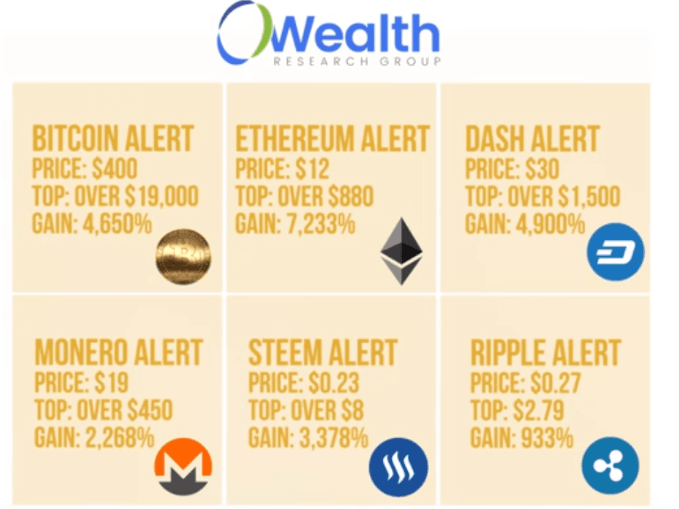 As early as May of 2017, many of you have emailed to share with us the legendary profits made with altcoins and Bitcoin last year.

In December of 2017, we alerted on Ripple (XRP) and banked close to 1,000% in a month. These were generational gains, perhaps even once-in-a-century trades.

Most people, the majority of Americans, Europeans, Asians, and Australians, making a decent living, saving and investing the remainder, don’t have a prayer in the world to become financially independent before their 50s or 60s. With today’s wages, having a vast portfolio of assets to generate passive income, isn’t possible, unless you work for 20 years, climbing up the ladder.

Only building successful businesses or making concentrated, calculated investments with high-growth stocks can catapult their lives and change it in a meaningful, measurable, and significant way over the course of three to ten years.

2017 presented such an opportunity with cryptocurrencies. Some of us have made hundreds of thousands of dollars, after-tax. This is no mean feat.

On Sunday, I published what I view as the bedrock of wealth – the surest way to become a millionaire within three to five decades, even with a mediocre salary. I believe that anyone, whether an entry-level employee or the CEO of a Fortune 500 company, should lock the lion share of his funds with this strategy, but this is not a fast lane to riches, it’s the 40-yr marathon.

With this newsletter, I combine both of these worlds, though. While it is the core of my philosophy to build a fortress of assets over time, using profits from my active businesses, it is also my intention and burning desire to replicate our incredible track record in 2017 of being early to the biggest “wealth pockets” of our times.

When I saw the Ethereum project in person when every ETH was priced for $12, and the entire project was worth only a few million dollars, we sent our alert. ETH went to trade for over $1,000 a few months afterwards.

Today, I am going to serve you, on a silver platter, the next Ethereum, while it’s still in its infancy.

Tomorrow, I’m scheduled to speak with an entrepreneur, who has been involved with over 100 ventures and private equity investments over the past 15 years and founded the fourth largest company of its kind in one of the most competitive industries in North America.

He was named CEO of the Year during this business cycle, and his company is working in a sector, which is set to usher in a new wave of multi-millionaires and billionaires.

I personally think that this person will have a 10-figure net worth by 2024. Therefore, I’m attaching myself to him now, building a relationship that will benefit us all!

Amazon, Netflix, and Apple are already making use of artificial intelligence, as well as Google, but it is hardly scratching the surface of what’s about to disrupt all industries, from our long-standing retail and commerce, to our modernized internet and communications.

In five to seven years, quantum computing will be a reality.

This type of power, as exhibited by these machines, will transform and impact the lives of all people, especially in the western world.

Remember, artificial intelligence is going to be bigger than the Internet, and when you marry it with cryptography or blockchain technology, you get an unbeatable business combination.

Trillions of dollars are at stake, and we’re going to see the new Bill Gates and Jeff Bezos emerging by the time this matures.

In my opinion, this particular person will be bigger than Sir Richard Branson. Right now, he is working on becoming the first person to take artificial intelligence and blockchain tech to the next stage.

For example, in the past few years, companies have started implementing A.I. in commuting, as traffic jams in the U.S., for instance, result in lost productivity in the billions of dollars a year, alone.

Artificial Intelligence will be used to optimize your sleeping, eating, and your spending. It will find the highest quality and the lowest price and will alert you to opportunities in your sphere.

But, it will also make current systems obsolete in many ways, which means that a massive wealth transfer will occur, where innovators and pioneers of technology companies and software developers will make a bloody fortune.

Now, most pure-play artificial intelligence companies remain private for years, just like Google did in the early internet days, but if you want to achieve greatness, you must tap the capital markets, which is what I’ve uncovered for us.

The world’s first pure-play on artificial intelligence uses cryptography and decentralized blockchain technology – the best part is that just like with the Google IPO, this company is also an established enterprise already, with a network of existing Joint Ventures and partnerships. 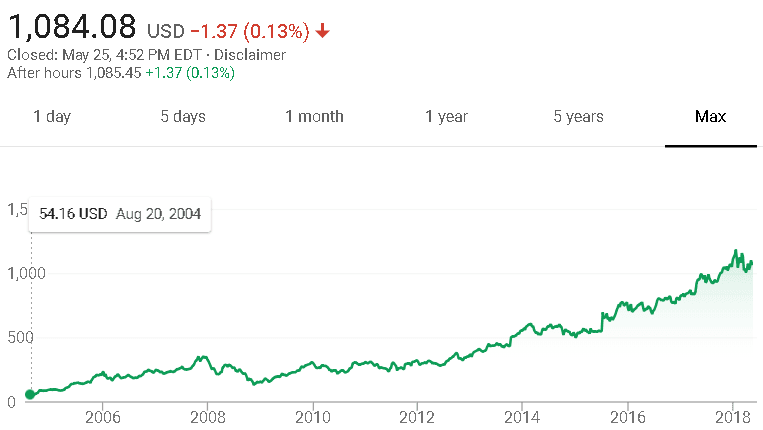 That’s a compounded return of 24% annually. To compare that with other forms of investing, the S&P 500 has returned 147% during this period and the NASDAQ has earned investors 303%.

To date, Litecoin has been my single biggest winner, regarding a massive return over a short period.

This upcoming artificial intelligence play could dwarf that and then some.