Global central banks have decided to literally spit in the face of the general population.

Most people – about 75% of the world’s working-class demographic, especially in the largest, most developed economies, rely on A SOLE source of income. To them, the chief ways to increase their wealth are to (1) get higher wages from their existing jobs, (2) pay lower taxes, (3) develop skills to get a promotion that comes with bigger paydays, and (4) build a secondary business source, a part-time endeavor to supplement their main one.

Lowering taxes in developed countries is IMPOSSIBLE, since all of them are running massive, out of the ordinary, outrageous social programs that have put them all on permanent deficit spending autopilots. Forget about ever getting meaningful tax breaks if you’re a working man. Any tax reform is temporary, at best and is done mostly for political reasons.

Secondly, eliminate from your mind the probability that your employer would EVER give you a significant wage boost. Just scratch that hope; since the corporate world is incredibly efficient and competitive, as well as globalized, the wages pressure is DOWN, overall. The only people getting increases are the minimum wage jobs, for political reasons. These are classified as poor and the government wants to show them they care, in exchange for votes. Top management teams are making a fortune in salaries and bonuses, due to share buybacks.

This leaves only three viable ways to elevate your quality of life as an employee: (A) develop your skills and get promoted, (B) build secondary sources on a part-time basis, (C) improve your workplace environment itself – a better job, without necessarily getting more money, but one that makes you satisfied and happy.

I want to show you how to achieve the first one and the second one, without taking on any expenses to get there. In other words, what most people do is go back to school and get another degree in order to extend their bios, but I want to give you INFINITE returns – zero cost and much more compensation than you’ve ever received in your life.

These will be the focuses behind Thursday’s letter. Right now, I want to show you why the central banks are making it worse for you by lowering rates again.

Since 3 out of 4 working-class Americans depend on their paycheck for survival, any sort of slowdown that can put their job at risk or cut back on their hours is detrimental.

Cutting rates so late into a business cycle raises the debt levels of corporations, which shouldn’t be highly leveraged to begin with. Instead of focusing on Capex or R&D expenditures, which put more people to work, buyback programs have risen by 1.26X since last year! S&P 500 buybacks will climb by 13% to a new all-time high of $940 billion this year.

Negative rates also make CEOs look foolish for hoarding cash, so corporations are now hitting their lowest cash balances (as a percentage) in 39 years. This is HORRIBLE for your own job security, because you know it’s easier to sack a few heads than to earn more and raise cash.

There’s no going around it, though; by the end of 2019, most central banks will be cutting again. Central banks will never raise rates to normal ones AGAIN. From here on, it will be negative rates or zero rates until inflation shows up, forcing currency devaluations in order to deal with the debt.

This is the primary reason that central banks are easing again; it’s called preemptive cutting, which is the traditional monetary strategy of prolonging the business cycle. 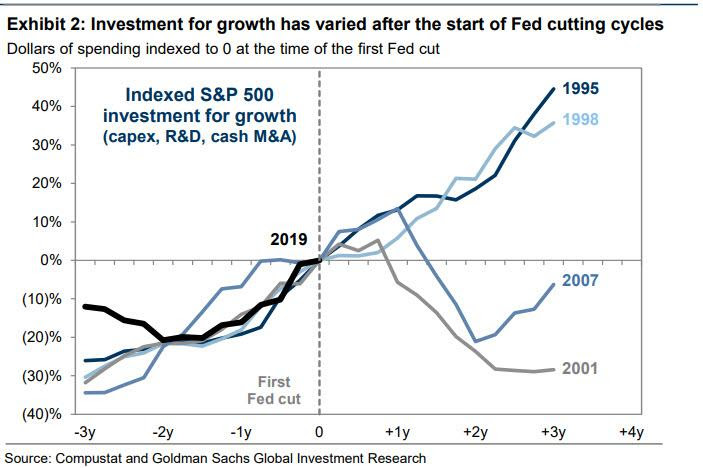 When the economy isn’t in a recession, cutting makes corporations spend and that’s what the FED hopes to achieve.

Outside of your main career, which accounts for the bulk of your income, the most aggressive move you can make is to take ASYMETRIC RISKS.

Bitcoin was a prime example. We published in December that Bitcoin’s bear market is normally 80%-90% crashes and that $3,300 is a buying opportunity; putting 2% of the portfolio in it was super-smart. The downside was 20% (stop loss), but the upside is a Bitcoin bull market, which has been a fireworks show.

In December, we also were extremely bullish on U.S. equities; the market dropped 20% and our positions in very safe companies have gone up 48% on average, versus the 19% in the S&P 500, since then.

The next big ASYMETRIC RISK bet is silver. Coughing up about 2%-3% of the portfolio into the miners is a way of generating massive gains, while limiting the downside.

I HATE the way that the system, big government, and central bank choke the lifeblood of the middle class, but I will not let anyone spend even one second being a victim of it.

I don’t fight the corrupt bankers by protesting their actions, but through BECOMING WEALTHIER. The only way to rid our world of these monarchs of the modern age is to not need their existence. They retain positions of power only because the masses are too weak to rise up on their own merit.

Education and action are the keys, which is the purpose of publishing this information. People lived in darkness for millions of years, until one person educated the world about electricity and darkness was no more.

Learning how to be a person of value to others would eliminate subsidies and unsustainable social programs; it will not happen overnight, but it is a goal worth devoting an entire lifetime to; making lives better, by helping individuals understand how unique and capable they are, when they put their minds to it. So as long as these ten fingers can type, I’ll be here.

Fight the system, by eliminating any reliance upon it.