Building Wealth One Step At A Time

My five-year-old daughter keeps asking me to take her to the circus. What kid doesn’t want to see smiling clowns, soaring acrobats and dangerous animals performing tricks?

In the early days of the circus, taming lions was one of the riskiest professions one could undertake, until a number of now-famous tamers figured out a few key attributes of how lions’ eyes and brains operate.

In this picture, you see a lion tamer in the circus: 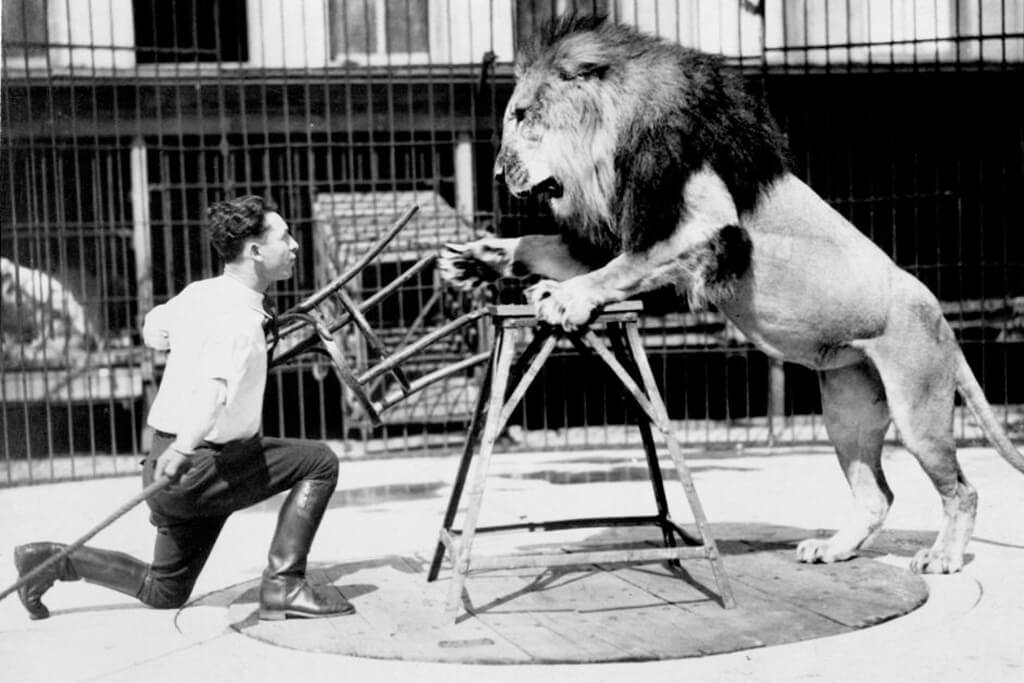 When asked, most onlookers and spectators reply that the whip is what’s important for taming the lion, since (supposedly) the tamer uses force to condition the lion to obey, but that’s false.

The whip isn’t what’s critical for the survival and well-being of the entertainer!

Lions are similar to humans when it comes to indecision; when faced with a confusing situation, they freeze.

The mighty lion, which can kill the person in the ring with him in a matter of seconds, is actually frozen, when presented with the legs of the stool.

The chair has four legs and the lion is attempting to concentrate on all of them at once; this is his downfall.

This animal, which is nicknamed the “King of the Jungle” and rightly feared by all others in the animal kingdom including humans, is paralyzed by the wooden stool.

This majestic beast, whose roar can be heard five miles away, reach speeds of 50 MPH and leap as far as 12 feet, is no match for the four-legged stool.

His eyes are glued to the four separate objects in front of him, and he is confused by the myriad of options.

Human beings, the most intelligent creatures the universe has ever known, capable of inventing machines that can take us to the moon and to Mars, capable of solving most of nature’s riddles and enigmas, are also easily distracted by such things.

Shares of AMC, GME and other meme stocks and altcoins are dangled in front of their faces. They’re glued to their screens, as friends tell them tales of turning a few thousand dollars into millions within months.

Hypnotized and distracted, they lose all sense of logic and pay exorbitant prices, without having any idea what their exit strategy is.

All they know is that somebody else is making money and they want to join the party.

Last week, I purchased an annual membership to the pool and country club next to my apartment. I picked up my daughter early from pre-school and headed straight there.

It was 2 PM, so the pool was relatively empty. By 4 PM, other parents, who got off work and picked their kids up, started herding in.

The pool wasn’t fun anymore; it was congested, loud and felt tight and overwhelming.

Those who got into these meme stocks and altcoins early had the pool to themselves, but that’s not the case anymore and very soon, the rug will be pulled from underneath this madness, leaving millions of gamblers with pee-water.

It happens every time, when one is distracted from building wealth and resorts to a lazy gambler mentality of chasing hot things.

If you’re early, congrats… if you’re not, know that in a game of poker, if you don’t know who the patsy is after a few minutes of playing, then you’re it.

We are not securities dealers or brokers, investment advisers or financial advisers, and you should not rely on the information herein as investment advice. We are a marketing company and are paid advertisers. If you are seeking personal investment advice, please contact a qualified and registered broker, investment adviser or financial adviser. You should not make any investment decisions based on our communications. Examples that we provide of share price increases pertaining to a particular Issuer from one referenced date to another represent an arbitrarily chosen time period and are no indication whatsoever of future stock prices for that Issuer and are of no predictive value. Our stock profiles are intended to highlight certain companies for your further investigation; they are not stock recommendations or constitute an offer or sale of the referenced securities. The securities issued by the companies we profile should be considered high risk; if you do invest despite these warnings, you may lose your entire investment. Please do your own research before investing, including reading the companies’ SEDAR and SEC filings, press releases, and risk disclosures. It is our policy that information contained in this profile was provided by the company, extracted from SEDAR and SEC filings, company websites, and other publicly available sources. We believe the sources and information are accurate and reliable but we cannot guarantee it.Please read our full disclaimer at WealthResearchGroup.com/disclaimer  ​