After the 1st FED rate hike in December of 2015, I began researching gold and silver stocks, after close to 3 years of focusing on biotechnology as my top game-changing industry. 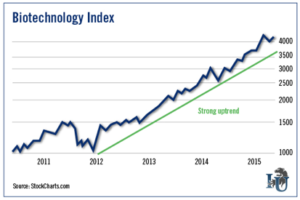 It was becoming apparent to me that the period of time spanning from the end of January 2016 until mid-February would be the “make or break” phase for mining stocks.

On the 17th of December 2015, I began, along with my research partners, to compile our Watch List, as our goal was to strengthen your financial fortress by publishing a rich plethora of investment research that included the big 3 Smart Speculative markets: cutting-edge science, cannabis, and natural resources.

The reason why the end of January and early February is a critical time period is because of the Chinese New Year.

The Lunar New Year is the most important date in the Chinese calendar. It’s also the start of the longest holiday, at two weeks, during which families reunite and go on vacations.

Gold prices won’t be supported by Chinese traders next week, as markets will be closed.

Gold is making the same pattern on the charts as it did after the 1st FED rate hike. 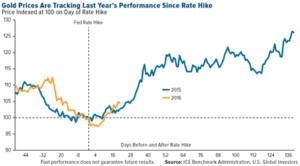 Last year, this Chinese holiday marked the beginning of the biggest move in precious metals seen in decades.

Our initial stock suggestion was a silver producer, and what I want you to pay attention to is the price action during the time of the holiday.

The 1st and 2nd weeks of February marked the early stages of a 1,066% move in 7 months for this company, bottom to top, and it wasn’t the only one.

The idea behind this is simple: China’s middle class is now bigger than the U.S.’, and it is going to become much more dominant. 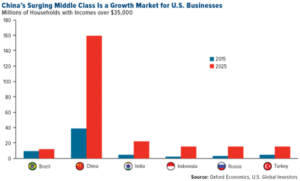 Now, more than in 2016, the converging economic indicators for gold are near perfect, yet it’s only up 3.3%.

The Muslim Sharia gold law is also on the horizon, and anticipation is building.

The one clear indicator for higher gold prices is a weak U.S. dollar. 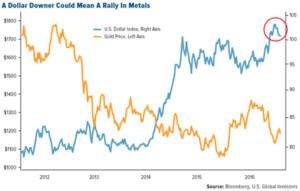 The U.S. dollar has been on a massive uptrend for close to 3 years, and it looks like the inflationary pressures of the new era of Trump, coupled with higher salaries (as 20 states increased minimum wages in 2016) and higher costs of real estate expenditures, are removing the last hurdle for the gold bull to charge at full throttle. 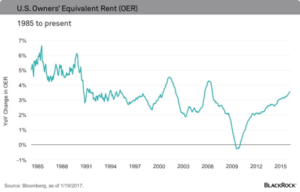 Chinese investors are enjoying a prolific run up, and they could be liquidating a portion of their gains into gold soon. 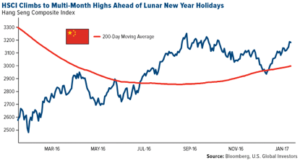 The uncertainty of global trade agreements and new policies has historically been a defining indicator of gold’s role as the ultimate form of money during times of change, and we could be on the cusp of a violent move, so I want you to be alert and attentive, as the market could offer us our 1st major buying opportunity of the year. 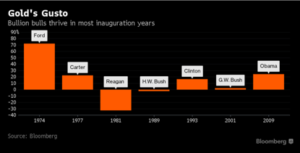 The last important historical measure is the S&P 500’s performance after the 2nd rate hike and in inauguration years.

There is increased optimism, and most investors are lowering guards – usually, that’s a sign to be cautious.

Wealth Research Group will be watching the next few trading days with a hawk’s eye, and we will update you on exactly how to position for potential buying opportunities.