The King Kong of All Catastrophes

The FED raised rates by 75 bps, as was already fully priced, yet the markets absolutely tanked to end the Wednesday session, tumbled throughout Thursday and got annihilated on Friday to close the week.

It wasn’t Powell’s statement that caused most of it, though there were quite a few issues that I identified in the formal public statement that got me rattled, but the Q&A session was truly a disaster, a giant extravaganza of central banking fallacies.

Know this: The worst reset of our lifetimes is officially underway.

The stock market has priced much of it, but not the full extent of it; my analysis shows that we’re about 70%-75% of the way there, when it comes to the worst-case scenario for global equities, but the real mess is elsewhere and is just getting started!

Wealth Research Group does not know where rates are headed, because that is a function of changing variables, but we were the first to boldly claim that zero interest rates are dead, well before Wall Street began to even entertain the thought that the FED would not pivot and could not do so, both politically and/or financially.

Rates rise in a bond bear market – this is happening right now, as de-globalization is accelerating because of the tension over Taiwan and the war in Ukraine now entering its second stage. 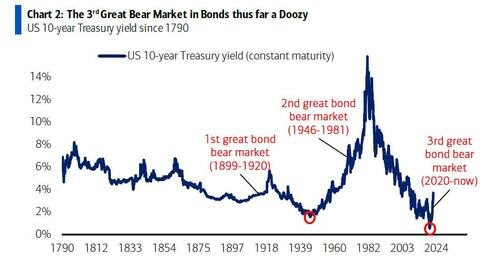 If one owns a government bond and interest rates rise, his bond loses value and, this year, the losses are on course to surpass 1949, 1931 and 1920; all three of these came on the backs of three terrifying events: WW2, The Great Depression and WW1!

We have not yet seen the worst for the stock market and the reason is that, as far as Main Street is concerned, their jobs and, therefore, main income streams (jobs/careers) are still in place and they’ve yet to see their houses fall sharply.

To me, the FED pivot, so to speak, or the moment in time when the FED will assume that it has won the battle over inflation, is when this takes place:

De-globalization is, perhaps, the most terrifying of all of the major trends, as it curtails growth, creates uncertainty and leads to lack of trust.

We’re paying the price of the zero-interest rate era, which lasted 12 years, and we’re paying all at once.