A couple of days ago, my wife invited her mother over. Originally, my wife comes from a region of Ukraine, which she kept explaining to me was a poor, sparsely-populated rural and agricultural area. Today, we know it as the heart of the battleground, the region of Donbas.

It’s really incredible to think about how her mother made the choice to come from Ukraine to Israel in 1999, right when the worst period of suicide bombings started in civilian centers here, and now 22 years later, her birthplace is the world’s worst warzone.

One of her mom’s favorites are pickles, so she bought her a glass jar, filled with the type she really likes.

She tried to open that seal for a few minutes. She really looked red in the cheeks and couldn’t get it done. Those pickles were sitting there; we could all see them and a thin metallic seal was the only thing standing between us and them, but she couldn’t, for the life of her, pop the vacuum and open that can.

I took a spoon and shoved it in the narrow gap between the seal and the glass jar and got just a tiny bit of air to release, at which point it became a bit easier to unscrew.

I handed it over to my wife and she got the thing open, using just one finger.

Once the vacuum freed up and the air released, the whole thing was a piece of cake to turn.

September was the month that the vacuum was released from the markets and now the capitulation will commence. You’re going to see some of the biggest and most shocking down days of your life, because now that Apple Inc. has broken down, the floodgates have opened.

Apple was the last bastion, the one pillar holding the line, and it turned fragile last week, proving that even the Goliath of the equities can’t, by itself, lift the world out of the liquidity squeeze that central banks are putting on it.

In March 2020, when the world shut down and credit froze, the central banks came in to support. In October 2022, as the global economy collapses, not only will the central banks not come to the rescue, but they will be the instigators of the calamity. 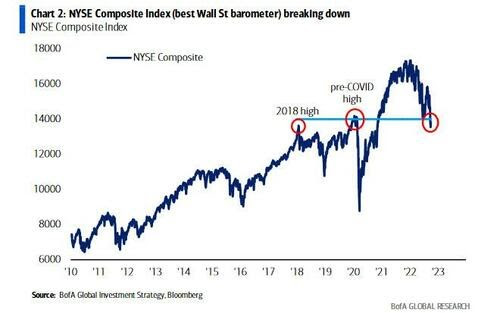 Now that the lows have been taken out, it’s anybody’s guess where the indices could fall next, but it could be that by tomorrow, on the first day of trading for the 4th quarter, Wall Street algorithms just sell everything and lower their exposure, down to 40% or 30% and they take the market down by another 2%-3%.

In case you’re frothing at the mouth, thinking to yourself that this is a generational buying opportunity and that you ought to act like a cold and calculating robot by buying the dip aggressively, understand that the credit event has not happened yet…

We’re still not seeing widespread panic over the idea that the FED is not about to pivot and that the most we’re going to get from it is a pause in rate hikes, but nothing in the way of cuts.

So, bottom line, October could be one of the worst times you’ve ever seen, and I think that we’ll get to the capitulation by the end of it.

After that, we believe that there will not be any V-shaped recovery, but a slow and lengthy one.

The reset is nearly complete.