The FED, led by James Bullard, president of the St. Louis Federal Reserve Bank, are fighting to keep a lid on what’s happening with gold and with Bitcoin. The free markets are definitely freaked-out about something because Bitcoin is already nearing $13,000 and, as I’ve been repeating and will keep saying in the future, make sure you’re using the ABS rule of investing when dealing with speculative assets.

ABS stands for Always Be Selling. Remember, non-producing assets, which do not yield a return (such as precious metals and Bitcoin), gyrate in price compared with stocks, bonds, and real estate, which do generate a predictable return. When investors deduce that the risk involved with getting the expected return on bonds or stocks outweighs the reward, they flock to safe havens – but that isn’t the status quo, so make sure you’re putting profits in your pockets in rallies like these.

One of my good friends, who taught me a lot about business, says that money is counted on the stairs, meaning when you leave the bank and the deal is done and is behind you, not when your gains are on paper only.

Bitcoin is up close to 400% since January and even though it can continue higher, I’m selling 5% of the position for every 20% it keeps on rising from here.

The central banks are less concerned with Bitcoin, though, since its market cap is way smaller than gold’s; believe me, they don’t like anything about what they’re seeing with the 18% rally in gold’s price since September.

Their first preemptive strike came yesterday when James Bullard toned down the talks over upcoming rate cuts and said that he does not see any reason for a July 50bps slash, and gold immediately went from $1,436 all the way down to $1,405.

As I said, I expected this to happen and for gold to take a breather. Furthermore, we’ll now see where the support is for it, where investors are coming in and buying it up.

30 minutes after that announcement, Jerome Powell, Fed chairman and the world’s most influential banker, took another shot at gold and said that the FED is calm and collected, not succumbing to political pressure, and will not be coerced into rushing. 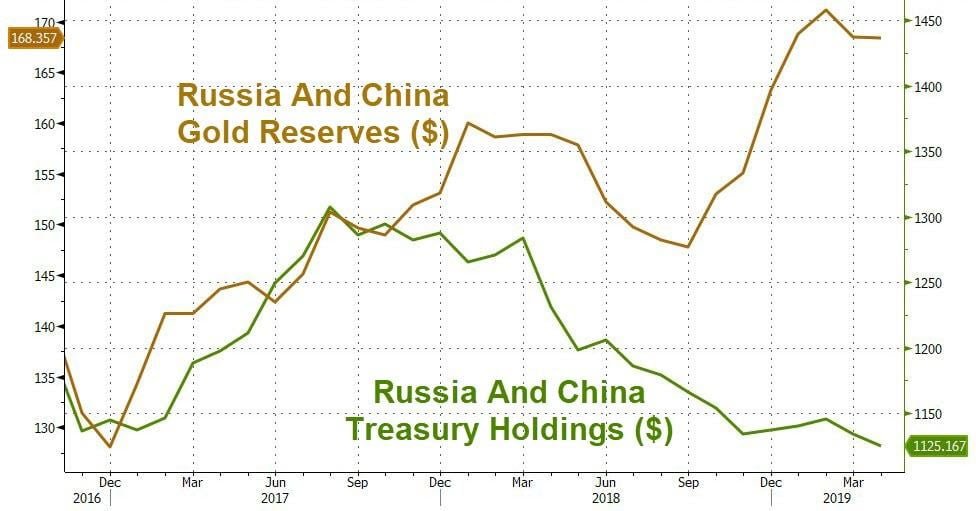 De-dollarization is unmistakable, though.

The dollar index, which measures its strength relative to a basket of other leading fiat currencies, is at a 3-month low, but a mere 1% drop from here and it’ll be sitting at 6-months and within the range of a technical bear market.

The G-20 summit, held this weekend, will dictate the market’s reaction to the trade deal news and its current stance, which will determine the price of safe haven assets.

It’s clear to everyone that this is a currency war between the dollar and those who want to see a new regime, but are yet unclear as to what it is going to be. This friction is playing into the hands of Bitcoin and gold.