I bet the haters didn’t see this coming!

I’ve spent yesterday and today combing through the details of the soon-to-be-papered deal between China and the United States, which has already caused (1) general markets and large indices to soar and mysteriously dump at the end of the Friday session, (2) precious metals to correct down, then recover and (3) the dollar to flatten. The deal will continue to work its way through the financial system, the global economy, and Main Street America, in the days ahead, so I’ll have an update on Tuesday.

In a 35-minute Q&A session, Trump really DELIVERED BIG! The interview started off with laying out some of the areas covered in the deal and then morphed into journalistic probes into the significance of the Phase 1 deal – the Skinny Deal, a mini-deal, as the media calls it.

I want to talk about some of the important matters in it:

One year from now, roughly 140 million Americans will vote for their next president; if 2016 is any measure of the anticipated turnout. The Chinese wouldn’t be making a comprehensive Phase 1 and entering a Phase 2, if they were betting on another horse.

This deal is about agriculture, financial services, foreign exchange and IP – four very critical areas for the economy.

Obviously, the Chinese aren’t betting on impeachment either, or on the likelihood of a Democrat victory, which is interesting to see.

Phase 1 includes a massive purchase of agricultural products by China from American farmers. The deal is so big that Trump jokingly named John Deere – a company we covered a few years ago at $77/share and is currently trading for $170 – as an investment opportunity. He also said that buying farmland is a good idea.

There’s no doubt that Trump’s administration and China’s delegation have proven that tough negotiations could lead to great relationships.

Not one fired bullet, not one casualty, not a single report of aggression and the two largest economies in the world are off to the races.

GOLD AND SILVER: TURMOIL BEHIND US – CORRECTION UNDERWAY!

The trade war has been the most talked about subject of the past couple of years.

Tariffs and global uncertainty have been blamed for the slowdown in Germany, the weak manufacturing numbers and the risk-off, extremely elevated cash positions held by investors – this is the beginning of the end for that period.

Most investors would assume that with the most feared geopolitical event on its way to getting resolved, precious metals would be entering a severe bear market, but it’s not as simple as that.

The trade deal is SUPER-BEARISH for the dollar, as I’ve said many times, including what I published just last Friday.

Take a look at this chart: 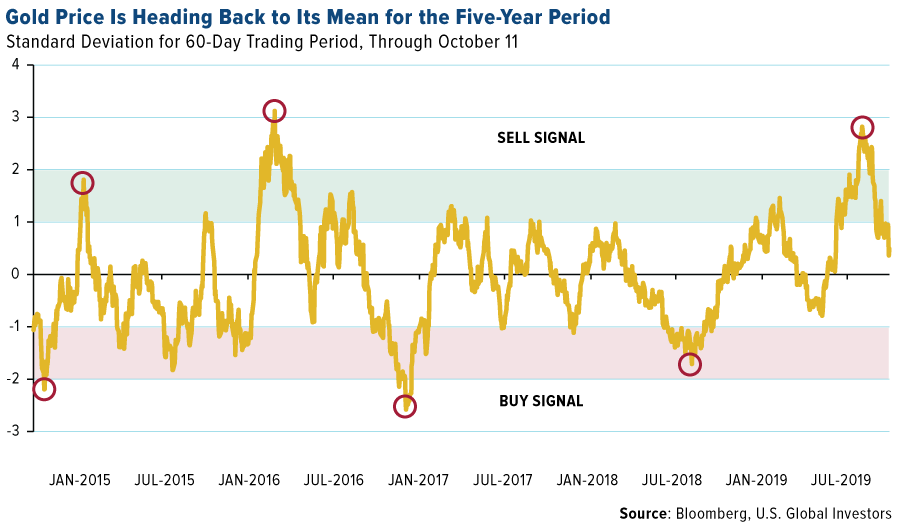 Gold reached EXTREME overbought conditions in August and it will take a while more for these concentrated positions to unwind.

A bull market is, from a technical analysis perspective, defined as higher highs and higher lows. Without a doubt, we’re still in an uptrend since December 2015 and we want to see gold forming a base around $1,400 (no lower than that) before its next ascent.

Chairman Powell has signaled that the Federal Reserve is opening the printing presses and we’ve got the GREEN LIGHT from the China-U.S. battle for corporations to make big plans and continue to bring value to the marketplace.

This deal is, in my mind, INFLATIONARY. We’ve been in this muted, slow-growth, totally suspicious recovery for 10 years, but this sort of hope could spark Americans and people everywhere to borrow and to spend.

As I’ve said on several occasions in recent weeks, this makes SILVER the more interesting of the two metals, once the bottom forms.

In the next few weeks, you’ll see shares of companies, which were deeply hurt by shaky Chinese-American issues, soar. Place your bets on those, as I am.

It’s a new world and Wealth Research Group believes the dollar’s days of strength are NUMBERED.